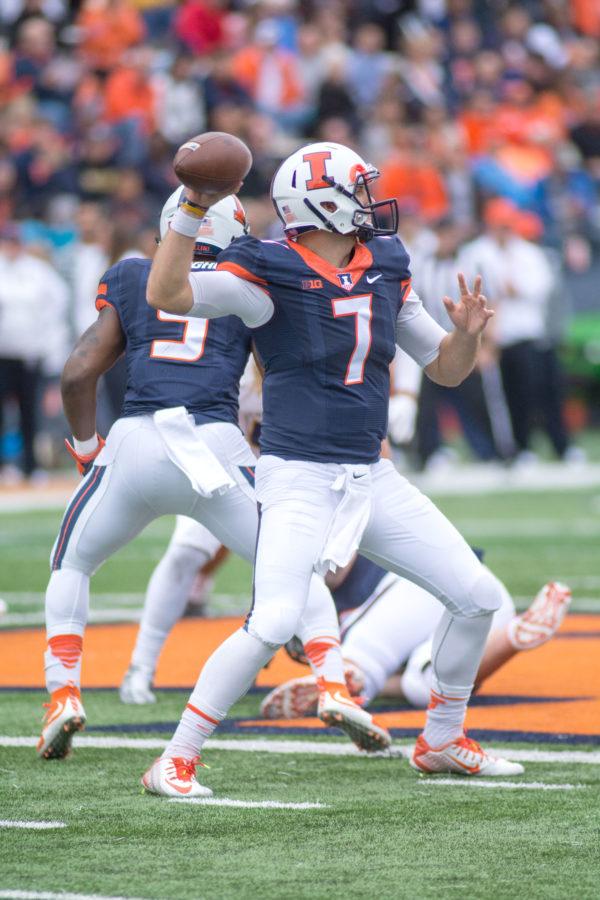 Illinois co-defensive coordinator Tim Banks stood in the team’s squad room with a smile after Saturday’s win over Western Illinois. He stood in front of the white board and waited while the media assembled around him. Reporters joked around with Banks, who laughed and commented that he was now a “good defensive coordinator.”

Banks has faced criticism for his defensive line since he arrived to Illinois in 2012 — Illinois’ defense, especially the team’s rush defense, has ranked at the bottom of the Big Ten for the past few seasons. But after two games, the defense looks different. Head coach Bill Cubit has noticed the difference and had a quick answer when he was asked.

“Maturity,” Cubit said. “I think we’re a lot more mature physically. You have to give credit to the players and to the defensive coaches. They’re doing a heck of a job.”

The Illini defense ranks among the top in the nation. Illinois is tied for first with Boston College and Kansas State for the fewest points allowed (3) and fourth for yards allowed per game (193). Opponents have gained 386 yards against Illinois in two games — sixth best nationally— and have allowed 78.5 rushing yards per game — 19th best nationally.

Illinois has forced five interceptions this season after safety Taylor Barton intercepted two passes Saturday — the team had seven last season. The Illini also blocked a field goal in the opener against Kent State, blocked a punt and returned it for a touchdown against Western Illinois and have racked up 14 three-and-outs through two games.

Although players admitted that the scheme has been tweaked in certain situations, much of the success has been because of the players and the goals they set.

“That’s the expectation,” linebacker Mason Monheim said. “We’re kind of living up to it. We had a high standard going into the summer, and we’re going to continue that.”

Crouch gets a chance

Cubit made sure to tell Chayce Crouch to “not try and win the Heisman” when the redshirt freshman quarterback entered the second half of the Kent State game. The message was different when Crouch entered Saturday against Western Illinois.

Crouch has benefited from large halftime leads. The coaching staff has decided to take out starting quarterback Wes Lunt, not wanting to risk injury. Crouch was shaky in his first career game against Kent State, going 3-for-9 for 46 yards, one touchdown and one interception but rebounded against Western Illinois, completing 5-of-8 passes for 37 yards and one touchdown.

“He’s done really well,” Lunt said. “Chayce is a young guy so he’s just getting better with the more reps that he gets.”

Cubit had more injuries to talk about during Monday’s press conference than he did the previous two weeks.

Tight end Tim Clary will have surgery Wednesday after injuring his left arm during Saturday’s game. Cubit did not say whether he would miss the entire season. Offensive lineman Zach Heath will also miss a couple of weeks with a sprained knee.

Eric Finney will return to practice Monday after missing Saturday’s game. Wide receiver Justin Hardee is out of his protective boot but Cubit said the wide receiver will not play Saturday. The head coach also said wide receiver Mike Dudek is running and making light cuts but hasn’t undergone contact and will not return until he is 100 percent.

Lunt, Clary’s roommate, knows what it’s like to deal with an injury during the season. Although the situation is difficult, Lunt is confident that Clary will return confident in his game.

“I told him I’ve been there and I know how it feels,” Lunt said. “He’s a fifth-year guy, he’s a veteran guy who knows the ins and outs of it … Everyday he’s gotten better with his mood and his attitude, so he’ll be fine.”