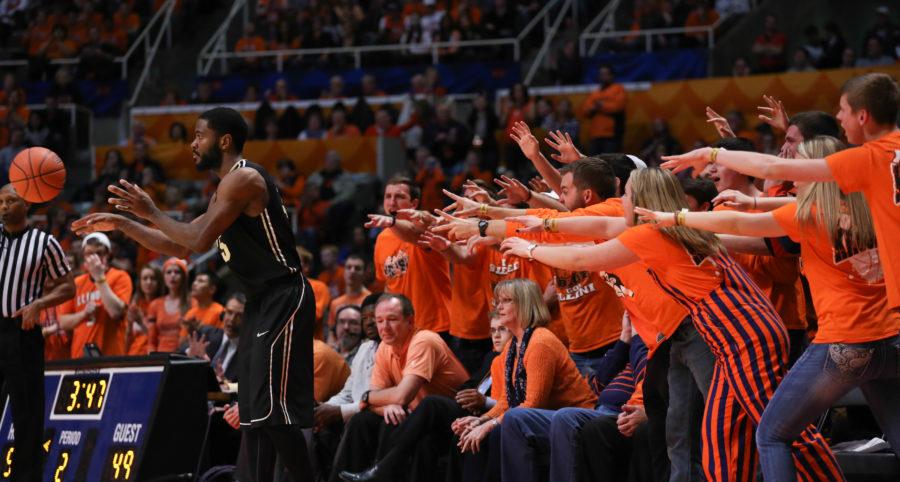 Member’s of the Orange Krush attempt to distract Rapheal Davis (35) while he inbounds the ball during the game against Purdue at State Farm Center on Jan. 21, 2015. The Illini won 66-57.

The last time the Illinois Division of Intercollegiate Athletics moved the student section of seats for one of the two major sports on campus, it would be hard to argue that it was much of an improvement for the students themselves.

In 2007, the North End Zone section opened at Memorial Stadium, and Block I relocated there from its longtime home in the east main stands. Now Orange Krush, the Illini student cheering section for basketball games, is preparing for a change of scenery as well.

This time, it would seem that Illinois students are getting an upgrade.

Last year, the Krush had space for roughly 700 of its members to sit on the floor — behind the south basket, in the corners of the court and in several rows of courtside seats. The ongoing renovation of State Farm Center calls for student seating surrounding the court to double.

Starting with the 2015-16 season, there will be space for 1,200 Krush members to surround three sides of the State Farm Center court. Unlike in the past, hundreds of Illini students will be just off the sideline and behind the team benches, facing the TV cameras the entire game.

Krush membership numbers have declined since the height of Illini basketball’s popularity in the mid-2000s, falling to a total of 623 members last year — nearly half of what the program had at its peak. That number doesn’t include student season tickets sold through the Illinois Ticket Office, which until this year, was separate from Krush.

Up until last season, joining Orange Krush required paying a $25 Illini Pride membership fee and pledging a certain amount of money ($1.50 minimum for the majority of students) for each three-point shot the Illini made throughout the course of the season. The Krush, which doubles as a philanthropic organization, donated a portion of the money raised each season to charities.

In an effort to simplify the sign-up process and boost attendance, Krush leadership led the movement to bring all student season basketball tickets under the Krush umbrella.

“I think the biggest challenge was promoting how to join the organization,” Hannah Taylor said. Taylor is currently a Senior Advisor on the Illini Pride executive board and last year’s Orange Krush president.

“The three-point shot fundraiser was kind of convoluted and hard to explain in a very short amount of time,” she said. “In this day and age, people don’t want anything that’s complicated. They just want to be able to click on something, pay a little bit of money, and go.”

And that’s exactly what students can do from now on at fightingillini.com, starting at a flat rate of $125. There are higher levels of membership at $250 and $500, as well, which include additional perks for students. Student season tickets are no longer sold separately.

With a simpler registration process now in place, the challenge for Krush leadership is to boost their membership numbers.

“We just want to make sure we push consistently in the recruiting process,” Jack Rich, Orange Krush’s current president, said.

“Because one of the things in the back of our minds is, when they re-did the arena, a lot of the (public season ticket-holders) who used to sit down low got re-shuffled a little bit. And there will be a lot of people upset if the student section is half-empty.”

With the big donors and TV cameras watching, the pressure will be on indeed. In an effort to fill the floor, current Krush members are reaching out to other large groups of students.

“The Greek system is something I wanted to stress this year,” Rich said. “I don’t want to say we haven’t had a good relationship with them, but it’s not been where it could be. We’re really going to try and push that this year, get out and talk to a lot of the Greek community.”

Rich said that efforts are underway to appeal to freshmen and international students, as well, and that they’ve already started marketing at residence halls on weeknights.

Keeping the Krush’s charity mission intact was also a focal point of the restructuring. According to Taylor, Krush aims to raise $200,000 per year, of which $100,000 will be donated each year to the DIA to help fund the State Farm Center renovation until 2024, with the other half donated to charitable organizations.

With registration open and the new system firmly in place, the Krush’s recruiting efforts will continue as the Dec. 2 home opener against Notre Dame draws closer.

“It will be a pretty huge game, it will be pretty cool,” Rich said. “We should have the roof rockin’ off the place.”

Alex is a senior in AHS.
[email protected]