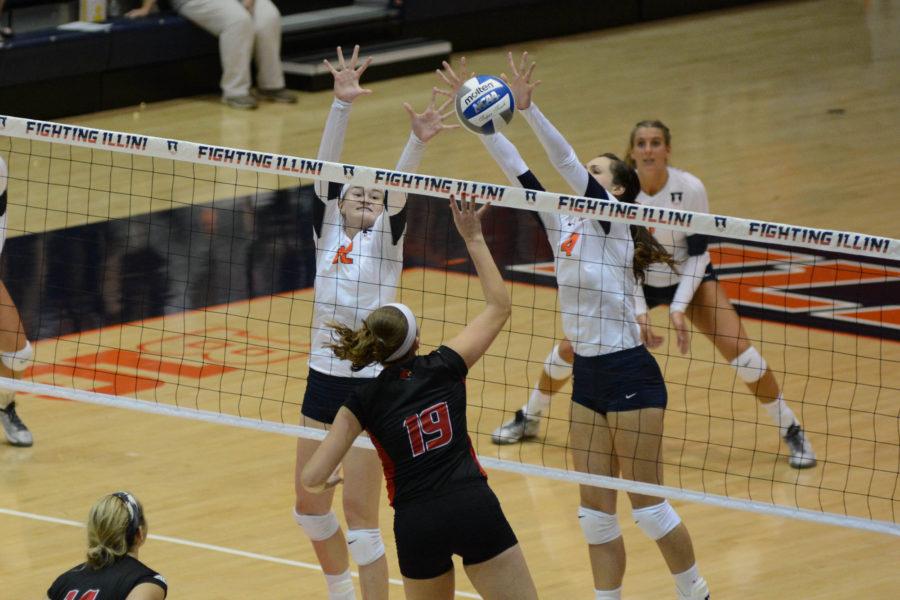 The No. 6 Illinois volleyball team (7-1) travels to Tempe, Arizona, this weekend to play in the Red Lyon Invitational.

Illinois is 12-0 in its past 12 sets and have yet to lose an opening set of any match thus far. They’ll need the same type of hot start against Arizona State on Saturday. The 10th-ranked Sun Devils boast one of the biggest and most physical lineups in the nation, led by senior outside hitter Macey Gardner, whom Hambly called a “special player.”

Gardner finished her 2014 campaign with 594 kills (14 matches with 20 or more) and earned All-Pac-12 honors for the third-straight time in her collegiate career. Hambly mentioned freshman setter Kylie Pickrell and the towering duo of senior middle blocker Mercedes Binns (6-foot-3) and junior outside hitter BreElle Bailey (6-foot-4) as other players to watch for.

Fortunately for Illinois, players like junior middle blocker Katie Stadick, junior outside hitter Michelle Strizak and sophomore libero Brandi Donnelly have been consistent since the team lost its last match — to No. 2 Stanford on Sept. 4. That experience will be key for the Illini heading into competitive Big Ten play. Illinois opens conference play against Maryland on Sept. 25 and travel to Rutgers the next day.

Though Hambly acknowledged that the Illini defended extremely well in a weekend that included a 25-9 win over South Dakota State, he made it clear that defense is still a focal point in practice. He explained that hitting percentage can be misleading sometimes, because a .400 effort, for example, might come at the expense of the other team scoring at the same clip – meaning it’s a wash.

As a result, Hambly will continue to shore up his defense before facing high-octane opponents.

“We want to make sure we can stop teams like Penn State, Texas, Wisconsin, Minnesota, Nebraska and those guys,” he said.

“I did think we did a really good job this weekend, especially our backcourt, Brandi Donnelly and [Danielle Davis] and [Allison Palmer] and everybody who’s back there,” she said. “But we’re always working on defense because there’s always things we can do better.”