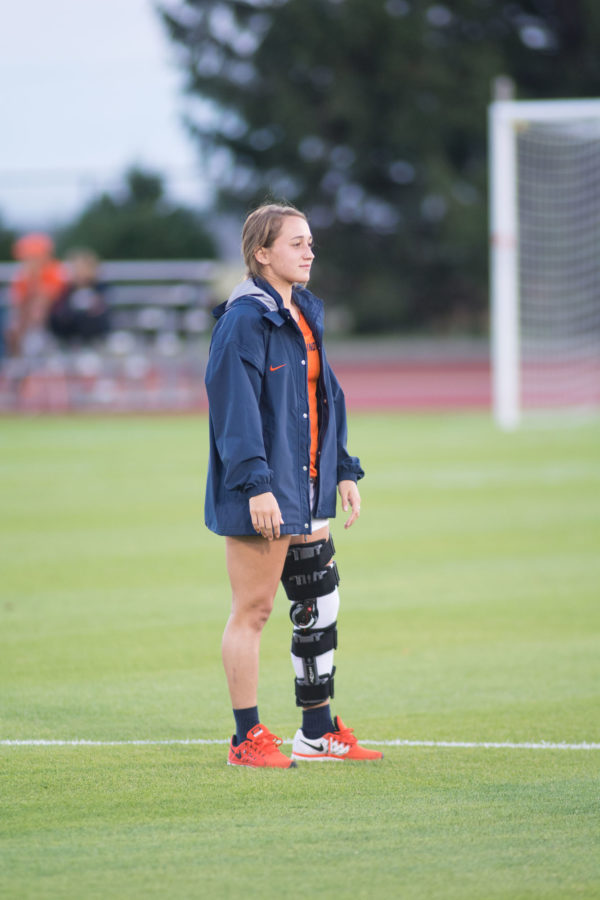 Reagan Robishaw on the sideline during the game against Northern Kentucky at Illinois Track and Soccer stadium on Friday, Sept. 11, 2015.

The Illinois soccer team was struck with an unfamiliar feeling this weekend. After outscoring opponents 16-6 in the first seven games of the season, the Illini were nearly shutout in their Big Ten season-opening matches this weekend.

The Illini kicked off conference play with a road trip to Indiana. Illinois (6-2-1) drew against Indiana 0-0 in double overtime on Friday and lost 3-1 to Purdue on Sunday.

Illinois might have struggled to find the back of the net this weekend, but certainly had no issue getting shots off. The Illini mustered up 22 shots against the Hoosiers and 12 against Purdue.

Along with those shot attempts, Illinois took 13 corner kicks. Head coach Janet Rayfield liked that her team created many scoring opportunities, but did not think the right mind set was there to convert.

“I liked the chances we got, I just didn’t like the mentality that we had,” Rayfield said. “You don’t win Big Ten games without 90 minutes of consistent effort and work rate and relentlessness and we didn’t have that today.”

While missed opportunities played a major factor in Illinois’ weekend games, it may not have been the only reason for the Illini’s struggles.

Ten of Illinois starters played over 90 minutes in Friday’s double overtime game that lasted 110 minutes. Of those 10 players, eight played over 100 minutes.

Even with a day of rest in between games, fatigue may have carried over to Sunday’s match. After 27 minutes of play in the first half, Illinois leading-scorer Jannelle Flaws was subbed out. Seven minutes after the substitution was made, Purdue scored its first goal of the game.

Purdue sealed the game in the second half, scoring at the 58th and 64th minutes. By the time Illinois answered, it was too late.

Of the 34 shot attempts over the weekend, freshman Katie Murray scored Illinois’ lone goal in the final two minutes of Sunday’s loss to Purdue.

It was the first goal of her Illini career, and her overall performance was no surprise to Rayfield.

“Katie Murray is getting better everyday. For a freshman to understand what Big Ten soccer is like I think this first weekend is going to be a real step forward,” Rayfield said. “Every time we challenge her with something like that, she steps up and answers the challenge.”

Murray is expected to make a bigger contribution than expected with midfielder Reagan Robishaw expected to miss the remainder of the season with a injured knee.

While this weekend didn’t end as Rayfield had hoped, she still believes the team can bounce back. Next up for the Illini are home games against Rutgers and Maryland — Illinois is undefeated at home this season.

“Now the challenge is if can we have the mentality to bring our best, to work really hard to be our best, to commit to being our best,” Rayfield said. “I think if we can do that, then we can be a much better soccer team than what we showed today.”