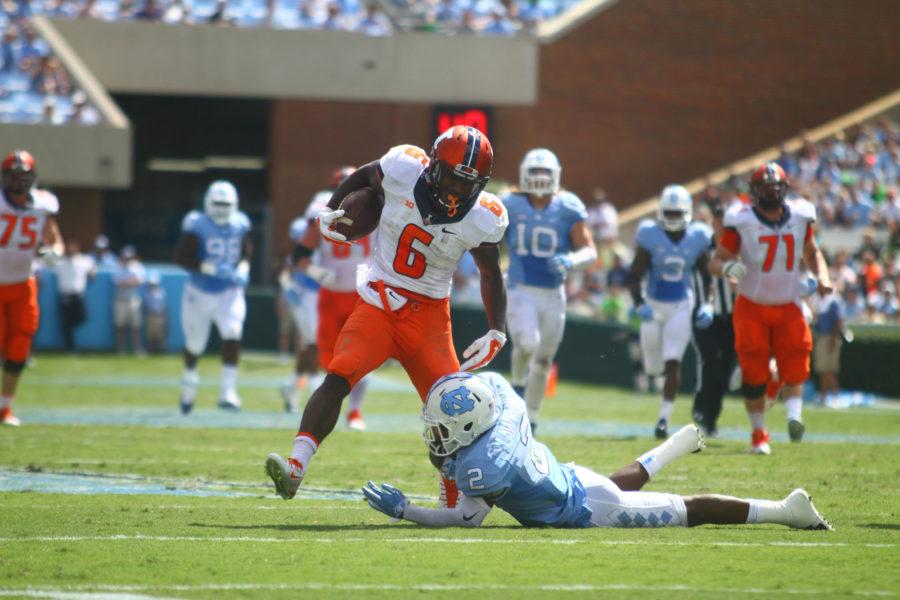 In high school, I had a football coach that always used to say, “Somebody needs to make a play!”

I never quite understood that: Obviously we were all trying to “make plays.” We wouldn’t have been on the field otherwise. Him exhorting us to do something we were already trying to do was confusing.

But I realized something: his expression might become the motto for the 2015 Illinois football team.

Somebody needs to make a play.

Against North Carolina on Saturday, the Illini got blown out on the scoreboard, but the game was closer than 48-14 — not that I’m trying to sound like Tim Beckman.

I’m not saying the Illini would have won had a few plays gone their way. North Carolina was clearly the better team. But Geronimo Allison dropped a touchdown and Taylor Zalewski missed two field goals. That’s 13 points left on the field.

Josh Ferguson was the one guy who made a few plays in Chapel Hill on Saturday. He out-rushed everybody on either team, but the Illinois offense isn’t supposed to revolve around 22 Ferguson carries a game. He needs the ball out in the flat and on the sideline and in the secondary, not between the tackles.

But this has been the story for the Illini through the last few seasons. Someone steps up at various times— Scheelhaase, Ferguson, O’Toole, Lunt, Dudek — but no one can sustain success.

Remember Zalewski’s first missed field goal? How it was weird that head coach Bill Cubit and Co. were kicking it from 57 yards instead of just heaving a hail mary?

First of all, a coach doesn’t call on a kicker to hit a field goal in a game that the kicker hasn’t made in practice. Second of all, he hit it far enough but knocked it wide right.

Zalewski was given an opportunity, and just needed to make a play. And he didn’t.

Zalewski certainly wasn’t the only one who didn’t make plays Saturday. There’s no one on the defensive side of the ball that can claim that he had a good day. Lunt was pretty bad. The offensive line didn’t help out much.

The silver lining? The season is only three weeks old. Middle Tennessee State presents an opportunity for the team to bounce back before the gauntlet of Big Ten play, but on national TV in what could have been a statement game for Cubit, his team fell flat.

Don’t expect things to get easier. This team has shown it can be resilient, but Big Ten play doesn’t feature a whole lot of Western Illinois and Kent States. Even Northwestern, which looked like a W on the Illini’s calendar as recently as four weeks ago, presents a challenge.

If no one is going to step up and kick that field goal, hold that block or deflect that pass, it’s going to be a long season for the Illini.