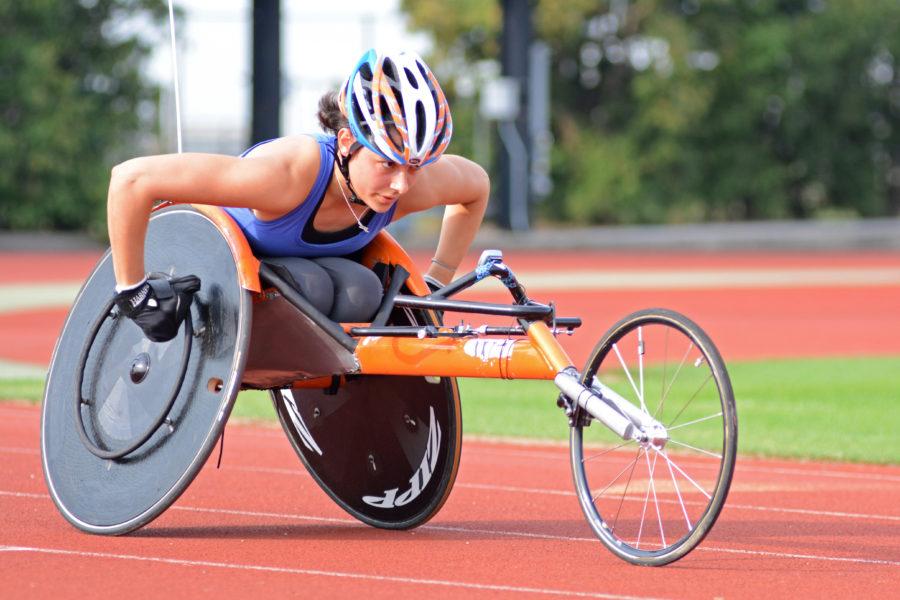 Katrina Gerhard during practice at the Track and Soccer stadium on Monday, September 7.

She likes the rush of speeding down an open road with scenery blurring past her. She likes zeroing in on the competition, with nothing else in the world to worry about. Just her, the path and her wheelchair.

She likes to take the positives out of every situation. That’s why the two wheels underneath her are a constant reminder of how fast she can go, rather than what was taken away from her.

“I love training,” Gerhard said. “It’s so much fun. I love being in my chair, I love being able to just do it all the time.” If not for being diagnosed with an uncommon medical condition in 2011, Gerhard wouldn’t have made the long trip from Acton, Mass., a suburb of Boston, to join one of the best wheelchair racing programs in the country. She wouldn’t have discovered her natural ability and passion for wheelchair sports. And she certainly wouldn’t have set two national records before entering the University of Illinois.

But one backflip gone awry set Gerhard on a completely unexpected path.

While competing with her sword dancing team, the Pocket Flyers, during her freshman year of high school, Gerhard broke her collarbone. There were no initial signs of damage to her spine — which traditionally precedes loss of limb use — but while her collarbone healed, Gerhard began to lose feeling in her legs. With more and more trips to the hospital, doctors finally diagnosed Gerhard with Chronic Inflammatory Demyelinating Polyneuropathy, a rare condition in the peripheral nerves that causes the gradual loss of sensory and reflex functions.

Doctors are still unsure if the fall catalyzed the rare condition or if the two are coincidental.

So, as a teenager already going through the rocky transitions of high school, Gerhard had to use to a 45-pound machine that she didn’t yet realize would help her go faster than she’d ever imagined.

“Now I’m much more comfortable with my body and my disability, but at first, there was definitely a lot of grief,” Gerhard said.

Gerhard credits her parents for being an unfailing support system while she learned how to navigate day-to-day life in a wheelchair. And even though she didn’t know it at the time, the simple decision to join her high school track team as a sophomore would add to her support system, and pave a path that looked tough to navigate.

Track and field is a no-cut sport at Acton-Boxborough Regional High, so Gerhard joined simply because she could. She was the only disabled athlete on the team but had plenty of support from her coaches and teammates. She enjoyed going out and being active every day and feeling more in shape than ever.

“It was interesting to go from feeling whole, like feeling like a dancer, and then suddenly not being able to dance or walk well anymore,” Gerhard said. “But then (I was) feeling much more fit and feeling much more healthy in my body because I was working out so much. That feeling was awesome.”

The only problem was that the Acton-Boxborough coaches didn’t necessarily know how to train a wheelchair racer, so they recommended Gerhard attend a one-day wheelchair sports clinic in Boston.

That’s where Gerhard met Jimmy Cuevas, the coach of an adaptive sports program.

Upon meeting and instructing Gerhard at the one-day event, Cuevas wanted her on his team, the North Jersey Navigators. Despite the distance between the two — 4 to 6 hours by car, depending on traffic — Cuevas regularly emailed Gerhard training plans and she competed with the Navigators in the spring.

“(Cuevas) definitely made me feel like I could do this,” Gerhard said. “The school track team was encouraging, but I was the only wheelchair racer, so I was sort of like this inspirational, cute thing, which is nice, but that wasn’t going to encourage me to be an actual competitive athlete.”

Gerhard suddenly saw where her life was headed. And with a newfound love for a sport she never expected to be a part of, nevertheless actually good at, Gerhard found no reason to wallow.

“A lot of people look at someone with a disability and there’s a lot of pity and there’s a lot of feeling as if they’re stunted and they can’t reach this full potential, and it’s kind of sad,” Gerhard said. “Being part of a community where there’s no excuses — no one’s going to sit around because that’s not what life’s about, especially for athletes.”

Under Cuevas’ guidance, Gerhard started training six days a week during her junior year and began participating in adaptive races across the country.

In the summer of 2014, she traveled to the National Junior Disability Championships in Ames, Iowa, walked away with 10 gold medals and set U-20 national records in javelin and pentathlon. She already held the U-20 record in shot put. She also took part in the Falmouth Road Race on Cape Cod, which she does annually due in part to the beautiful view of the beach from the course. In 2014, she placed second only to Illinois alumna and Paralympic great, Tatyana McFadden, whom Gerhard looks up to a great deal.

“What struck me most was her personality,” McFadden said of her new teammate. “She’s definitely very outgoing and really wants to learn a lot about the sport. Watching her race and watching her compete, she has great potential.”

Like McFadden, Gerhard hopes to uphold the tradition of great Illinois wheelchair racers. After just three and a half weeks of training with her, head coach Adam Bleakney believes Gerhard has what it takes to be very successful.

“She certainly is very diligent and committed, academically and athletically,” Bleakney said. “She’s very positive, very motivated, and those are the qualities that I look for when I’m recruiting. There’s no question that she’s going to be very successful.”

Similar to her previous coaches, Bleakney will look to further hone Gerhard’s natural talent for distance racing. As a program that saw 31 athletes — between alumni and current racers — represent the U.S. in the 2012 London Paralympic Games, Gerhard came to the right place to become an elite Paralympian.

The 20-plus student-athletes in Bleakney’s program train together every morning. They may not all compete in the same events or even rely on each other to be successful in competition, but the sense of community they create is a vital aspect to the tradition of excellence Bleakney and his staff have built over the past 11 years.

“The success of this program is built between the athletes and the camaraderie and the positive energy that exists everyday with this team,” Bleakney said. “That’s the real ingredient you put in when you’re mixing everything together that makes success happen.”

Bleakney holds his team to a high academic standard, which Gerhard has bought into. Gerhard has a lot of life goals, and perhaps her loftiest is to eventually become a doctor: she’s majoring in biology and plans to attend medical school.

Gerhard attacks her academics in the same manner she pushes herself in training.

“For me, the sport actually helps academics because working out just makes me feel more focused and awake and alive,” Gerhard said.

Previous to her condition, Gerhard didn’t think she would end up as a part of a competitive team at the collegiate level any more than she considered herself an athlete.

Now she is training for the Chicago Marathon, a 26.2-mile adventure through the city on Oct. 11. Last year’s winner? McFadden, who has won the race in five of the last six years, while plenty of Illinois racers placed not far behind her.

Because she still has some minor sensation in her legs, it is difficult for Gerhard to stay in her racing chair for much longer than an hour at a time. She’s worried she may have to stop to take a break from her chair during the marathon, but recently completed a 21-mile run during training, her longest distance yet.

She has no doubt that she will finish her first full marathon — she won the 2015 Boston Half-Marathon.

Right now, completing the Chicago Marathon is the first on Gerhard’s long list of goals. No matter what place she ends up taking, Gerhard will find solace in the long, secluded endurance run through the Windy City.

“I really like the longer races because you’re out on the road in the middle of nowhere and there’s no one around you, and it just feels great,” Gerhard said. “It’s weird because when you’re out there alone, you’re working really hard and you’re tiring your body out so much, but you also feel really peaceful and almost as if you’re meditating. You go into this zone and everything is more colorful and beautiful.