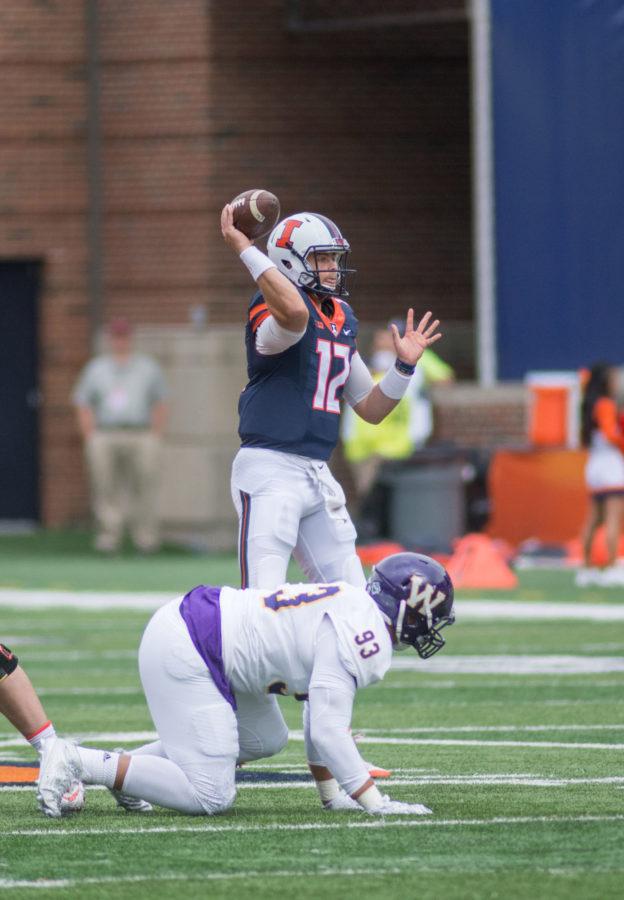 Illinois football’s first drive against North Carolina on Saturday couldn’t have been drawn up any better. The offense traveled 73 yards over 11 plays in 4:07. Quarterback Wes Lunt looked efficient with his throws and running back Josh Ferguson ran productive routes in what would be a 133-yard rushing day.

But the end of the drive would foreshadow how the offense’s day would go. Head coach Bill Cubit decided to go for it on fourth down from North Carolina’s three-yard line. Lunt took the snap and looked around before he found wide receiver Geronimo Allison in the middle of the end zone. Allison had the ball in his hands but couldn’t finish the catch when he fell to the ground.

“The biggest things from the game were the missed opportunities offensively,” Cubit said. “It seems that we let things like that snowball … We just didn’t make plays when we needed to. The dropped balls stopped drives all the time.”

Illinois wide receivers dropped nine passes against North Carolina and have dropped 21 on the season, more than all of last year. Both Lunt and Chayce Crouch completed 19 of 38 passes for 172 yards but the offense’s struggles concerned Cubit. Dropped passes have been a trend for the Illini even though the offense scored 96 points in the first two games of the season.

Cubit called the dropped passes a “community effort.” Lunt was also not perfect even though the starting offensive line hasn’t allowed a sack this season. Players said they have a strong relationship with the starting quarterback and like the type of leader that he is — both one who will address the issue and also give hard love.

“A little bit of both, it just depends,” Marchie Murdock said. “Wes, being a good leader, you have to know what is good for the person, so maybe one guys takes harsh criticism than another. I think Wes does that really well.

Starting kicker Taylor Zalewski missed two key field goals. The first came just before halftime after the Illini moved the ball to North Carolina’s 38-yard line. Cubit elected to attempt the 57-yard field goal instead of throwing a Hail Mary in the final seconds. Zalewski’s kick had the distance but was wide right.

“That was a crucial time of the game, we needed some points coming out of the half,” Lunt said. “That really deflated us because we really needed points at that time of the game.”

The kicker also missed a field goal on the first drive of the second half after the Illini offense went 65 yards in 12 plays down 20-7. Zalewski’s 45-yard attempt bounced off the right upright and the Illini wasted an opportunity.

Zalewski was 4-for-4 in the first games of the season, and hit a 43-yard field goal against Kent State. The senior hoped to turn the corner after a season when he made 3-of-6 field goals and was replaced by junior David Reisner. Illinois kickers finished 9-for-17 in 2014, last in the Big Ten, and also made 38-of-42 PATs, also worst in the conference.

“We’re confident (in the kickers),” Lunt said. “Taylor and David both have the capabilities to be great kickers and we’re all confident in them.”

Saturday was the first game many players competed for the entire game. Illinois held large leads in its first two games of the season and the coaching staff didn’t want to risk injury to the Illini starters.

Cubit admitted that fatigue was a factor along with the high temperatures — Chapel Hill, N.C., had a high of 87 degrees Saturday. While temperature and exhaustion were factors, players didn’t want to blame their poor performance on the circumstances.

“I don’t think it was too much,” Lunt said. “We practice hard like that every day … I think that the heat was a factor but it wasn’t anything that was game changing.”