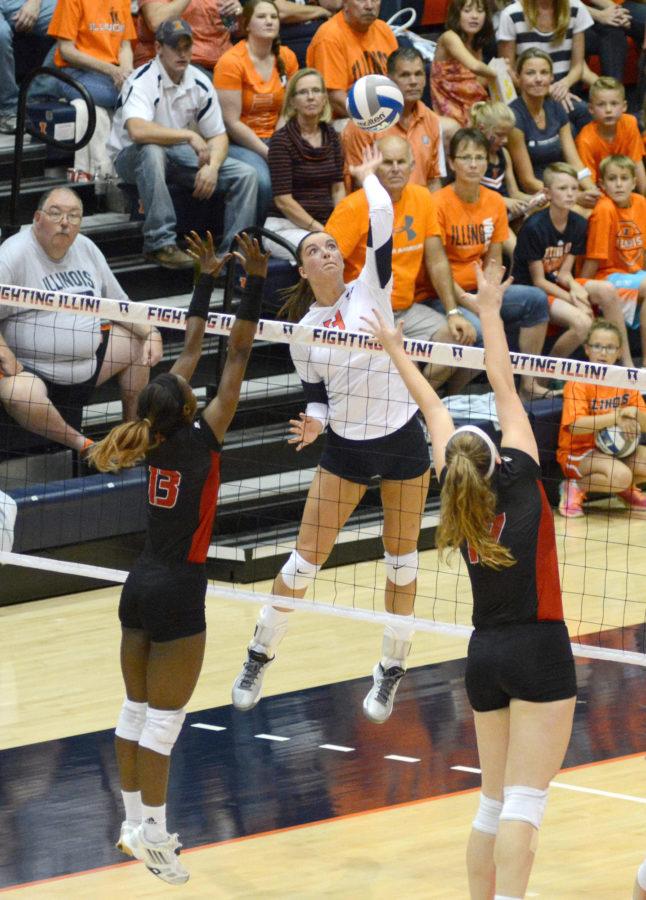 The Illini (9-2) defense stifled the Tigers’ (2-9) offense, limiting them to a negative hitting percentage throughout the match. On the other end, Illinois’ offense registered a .402 hit percentage, which included hitting .714 in the second set.

Illinois’ offense was led by hitters Katie Roustio, Michelle Strizak and Ali Stark, all of whom led the team with nine kills in the contest. Setter Alexis Viliunas facilitated the scoring output with 27 assists throughout the match in place of starter Jordyn Poulter.

Middle blocker Katie Stadick was given a break throughout the majority of the match, which seemed to pay off; she returned to lead the team in kills in its next two matches. Stadick credited her teammates for showcasing the team’s depth in the matchup.

“What’s really cool about our team is that you can put in anybody and it doesn’t really make a whole lot of difference,” Stadick said. “Our practices are pretty competitive.”

The Illini appeared to be on their way to a sixth-consecutive sweep in their second-round match against the University of Nevada-Las Vegas. The Rebels, however, managed to take advantage of their opponent’s confidence to take a third set and end Illinois’s sweep streak (25-18, 25-12, 21-25, 15-16).

Head coach Kevin Hambly was disappointed in his team’s complacency in the third set, and said the play did not meet expectations.

“We dominated three of the sets and let up in one of the sets,” Hambly said. “We played the way we should but in the one set, we took it easy and expected them to just roll over, and they didn’t.”

The team committed seven errors in the third set, one more than the previous two combined. The Illini recovered in the fourth set with a defensive effort that limited the Rebels to a .000 hit percentage — they had an equal number of kills and errors — to secure their second victory of the tournament.

Poulter returned to the starter role against UNLV and played one of her best matches of the season.

The freshman setter recorded 46 assists, the second most of her career, and added 10 digs to help lead Illinois to its sixth consecutive victory. It was her third double-double of the season, and first since the opening weekend at Huff Hall.

She followed the performance up with a second double-double against Arizona State, tallying 38 assists and a career high 11 digs. She also recorded six points, matching her career high. Her standout play was in a losing effort: the team lost its second match of the season to the Sun Devils.

After the tournament, Poulter said that she is still working on her synchronization with the team’s hitters, but she is feeling comfortable in her role heading into Big Ten play this weekend.

“It’s been team effort,” Poulter said. “I think that I have been doing a good job of getting passes that are easy to move around, and our hitters have been doing a great job of scoring and making great shots with whatever ball I put up.”