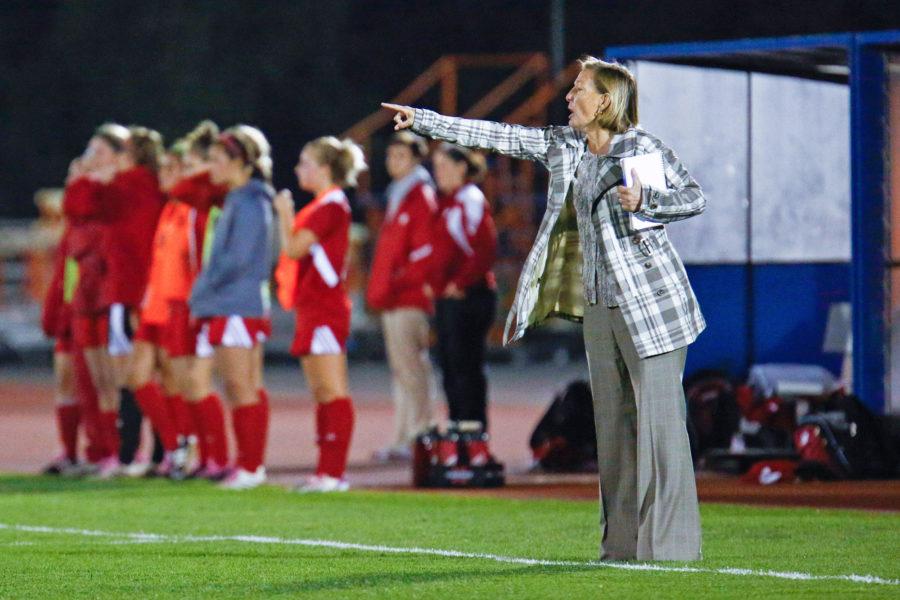 Illinois' head coach Janet Rayfield instructs her team during the game against No. 20 Wisconsin at the Illini Soccer and Track Stadium on Saturday, Oct. 12, 2013.

The Illinois soccer team scored an impressive 13 goals in its first four games of the season.

A lack of scoring comes as a frustration to head coach Janet Rayfield, not because the chances are not coming, but because her team is failing to convert.

“I liked the chances that we got, I just did not like the mentality that we had throughout the game on Sunday,” Rayfield said. “You do not win Big Ten games without 90 minutes of consistent effort, work rate, and relentlessness.”

Rayfield is approaching it with a “we’ll get the next one” attitude, but feels that her team shouldn’t take any scoring chances for granted.

The Illini are outshooting their opponents — firing off 15 shot attempts per game while allowing 11 attempts on average — but their goals per game average is down to 1.89.

Shots were plentiful for Illinois on the road over the weekend, which featured a 0-0 tie versus Indiana and a 3-1 loss to Purdue.

“I think you can probably look at each one individually, and have an area or a place where we can do better to convert some of those,” Rayfield said.

Flaws off her game lately

Illini superstar — a label most definitely earned by past performances — Jannelle Flaws was subbed out around the 27th minute on Sunday.

Her coach simply felt that the redshirt-senior forward wasn’t getting the job done.

“That high standard has to be for everyone,” Rayfield said. “If you look at the first 20 minutes versus the last 20 minutes, that’s the kind of effort, work rate, and consistency that we need from everybody on the field.”

Flaws is experiencing a scoring drought of her own. She netted seven goals in the Illini’s first four games of the season, but has only scored one time in her last five contests.

“If giving her a break was going to get that (level of consistency), then that is what we needed to do,” Rayfield said. “We’ve got to find a way to get that effort and mentality consistent.”

Freshman midfielder Katie Murray scored her first goal in an Illini uniform in the 88th minute of the team’s game against Purdue.

“Katie Murray is getting better every day,” Rayfield said. “For a freshman to understand what Big Ten soccer is like, I think the first weekend is going to be a real step forward for Katie.”

Rayfield thought that Murray’s play in the second half against Purdue was outstanding, noting that she had more an energy and a pep in her step that was not present in the first half.

Murray’s coach spoke highly about the freshman that has made a big impact so far with the Illini.

“This is what I know about Katie Murray: every time we challenge her with something like that, she steps up and answers,” Rayfield said. “This will be a real step forward for her, and I expect her to keep moving forward as we go on through the Big Ten season.”