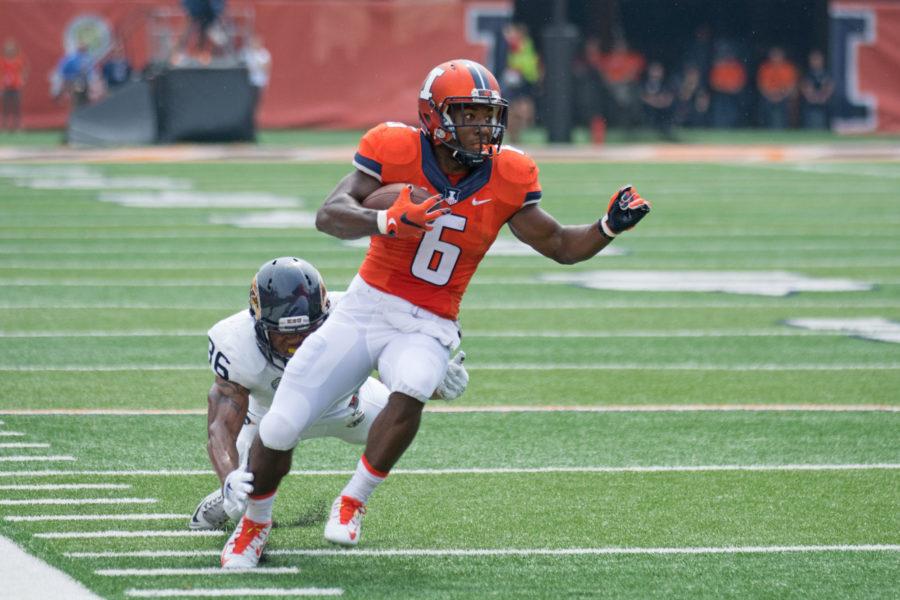 After a 48-14 loss to North Carolina, the Illinois football team was quiet on its journey home. A week of preparation did little come gametime and the scoreboard quickly reflected a game players thought was much closer in reality.

A bright spot in the struggling offensive game was running back Josh Ferguson, who had a career day: He became the 17th player in Illinois history to reach 2,000 career rushing yards. His 2,126 career yards move him up to No. 13 on Illinois’ all-time list. With 3,807 yards, Ferguson ranks fourth on Illinois’ career all-purpose yard list.

Ferguson rushed for 133 yards on 22 carries and one touchdown. It was his sixth 100-yard rushing game.

Not only is Ferguson making Illinois history, but his numbers are significant on a national scale.

He is one of only two active FBS players with over 2,000 career rushing yards and 1,000 career receiving yards.

However, this performance, while notable in the history books, didn’t receive as much focus from the coaches.

“To me if you lose, no one grades out,” said head coach Bill Cubit. “That’s my philosophy. We just didn’t do enough to win. Josh Ferguson played really well, but you’re not going to grade that out, you’re not going to single that out because we lost. And Josh understands that it’s all about the team.”

That team mentality has coaches and players narrowing in on the mental aspect of the game. In his Monday press conference, Cubit talked a lot about improving Illinois’ psychological approach — the Illini offense missed opportunities against North Carolina, dropping passes and missing tackles.

Cubit knows that some players may have a negative mindset with a struggling program, especially in a program that has seen a 12-16 record since he arrived.

“Everywhere I’ve been, it’s the same thing,” Cubit said. “Every program that I’ve ever taken over has not been really good, and it becomes mental. It’s a negative mindset because they hear it everywhere they go.”

With nine from North Carolina’s game and 21 total dropped balls this season, the Illini have already dropped more than all of last year. Cubit is hoping to nix the negative mindset that may be contributing to these dropped passes.

Wide receiver Marchie Murdock said that Cubit preaches “fail fast and move on.” But this idea might be difficult for the Illini who allowed 21 points in the fourth quarter.

In an effort to keep moving forward, the Illini will try to maintain that mindset for this week’s home game against Middle Tennessee State.