Illini football gets one last respite before Big Ten play 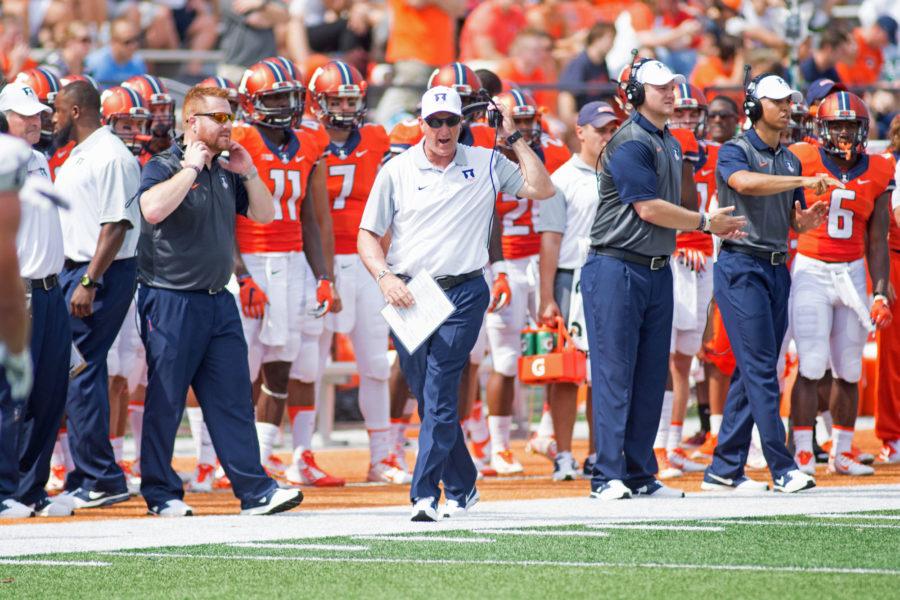 Illinois head football coach Bill Cubit gets fired up on the sideline during the game against Kent State at Memorial Field on Saturday, Sept. 5. Illinois won 52-3.

Illinois football is almost there: almost at the part of the schedule that matters.

The Illini have almost made it to Big Ten play.

Waiting for Big Ten play to come along feels like listening to “In The Air Tonight” by Phil Collins.

So far, the 2015 Illini season is like the rest of that song.

If Illinois had beaten North Carolina, the season would feel different. It really doesn’t matter all that much that the Illini stomped all over Kent State and Western Illinois. The loss to UNC makes those wins forgettable.

Saturday was horrible — in a vacuum — but it really doesn’t matter a lot in terms of this season’s legacy. The game would have mattered only had the Illini won it.

Bill Cubit needs a signature win to remove the word interim from his title, and beating the Tar Heels might have been that win.

Luckily for him, Saturday wasn’t really a signature loss because it mirrored defeats like those the Illini have suffered several times in the last few years.

Three wins in Big Ten play — especially if one comes over a top-25 team — matter a whole lot more than a Power 5 nonconference loss. Three Big Ten wins might not be enough to guarantee Cubit holds on to the reins past December, but they’d be far more important than the UNC loss.

Saturday afternoon’s game against Middle Tennessee State is the reverse of the UNC game — it only matters if the Illini lose.

It’s definitely a nice respite for the Illini, but looking forward, next week’s matchup with the Cornhuskers looms a lot larger than the Blue Raiders do this weekend.

Also, with regards to the status of the “Stripe the Stadium” idea: Can this be postponed to homecoming?

Consider it: A homecoming game that is mostly — maybe even completely — full, a big-time Wisconsin team in town for Illini fans to scream and yell at and an Illinois team that would be fired up by a good home turnout.

It just doesn’t seem very realistic to expect students and local fans alone to stripe a 60,000-seat stadium for a 2-1 team playing a Conference USA opponent. Call me crazy, but that’s what I think.

It’s the right idea, but it might be the wrong week to try and pull it off.

But for this team to bring back the droves of Illini football fans that have trickled away the last few seasons and for Cubit to remain the head coach past this season, respectable must become — at least in part — formidable.

The Illini can maintain respectability against Middle Tennessee, but once it comes to Big Ten play, they need to get formidable.