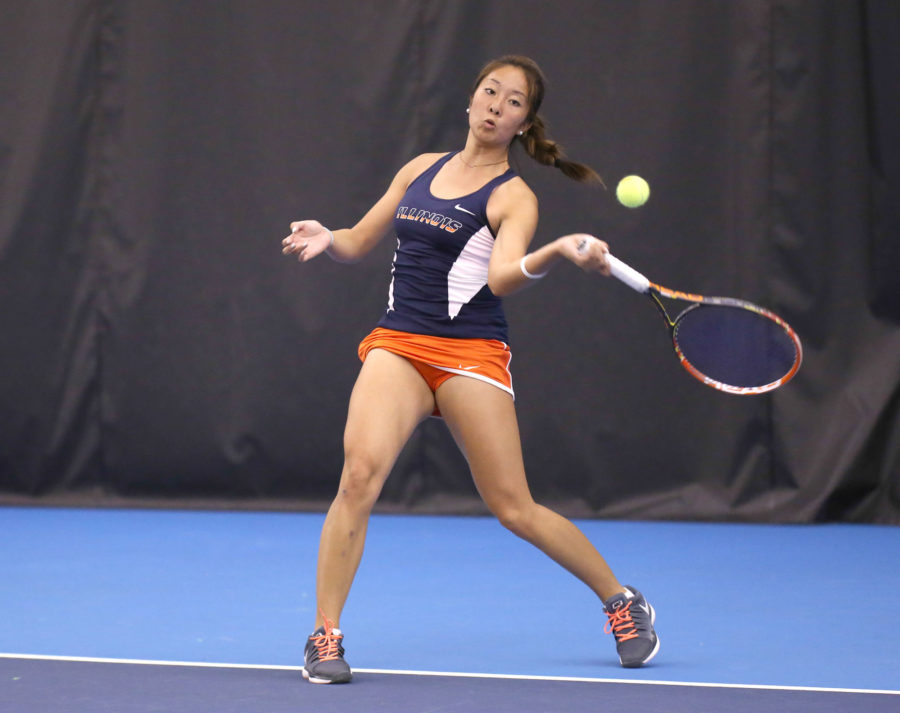 Illinois' Louise Kwong attempts to return the ball during the meet against UIUC at Atkins Tennis Center on Jan. 25, 2015. The Illini won 7-0.

The Illinois women’s tennis team left for Puerto Rico on Wednesday to open its season at the Puerto Rico Invitational, hosted by the University of Georgia.

The tournament will start Friday, September 25, and last until Sunday, Sept. 27.

The Illini will face three teams over the weekend, including the University of Miami, Mercer University, and the host of the invitational, the University of Georgia. They’ll face each team in both singles and doubles, but won’t play the same team back-to-back.

While the team waits for the tournament to start, they’ll have practice Wednesday and Thursday, when junior Louise Kwong said they’ll focus a lot on match play, making sure to get a lot of points in, along with practicing doubles.

Even with three talented freshmen new to the team and only one week of full team practice under the team’s belt, the Illini haven’t felt any issues with team chemistry.

“I think this year is by far one of the better years,” Kwong said. “We’ve meshed really well and even though we’ve only had one week of team training, we’ve been training for a month (outside of team practices).”

This feeling seems to be mutual throughout the team.

“The freshmen mesh really well with everyone,” sophomore Grace Tapak said. “Everyone’s more vocal (on the court), and everyone supports each other, and when we’re doing running, the freshman are cheering everyone on. In the past it would be the upperclassman cheering on the freshman, but the freshmen are really stepping up now.”

Head coach Evan Clark likes what he’s seen so far, agreeing that the chemistry among the team is good and the girls are competitive with each other during matches in practice. He said the team’s depth presents a good problem for him — he wants to make sure each of the nine players traveling receives playing time. Junior Alexis Casati is the team’s sole returning All-Big Ten player

“We’re figuring out our line-up and getting people in that need matches,” Clark said. “That’s kind of our problem this year; we’ve got so much depth, especially at the bottom. There are a lot of people fighting for spots.”

In the field of three teams, Clark said Georgia and Miami will provide tough competition because they consistently rank among the top teams in their respective conferences.

“Our competition’s going to be tough this weekend,” said Clark. “But that’s kind of what we need. We’re tired of playing each other and we’re ready to see some new faces.”