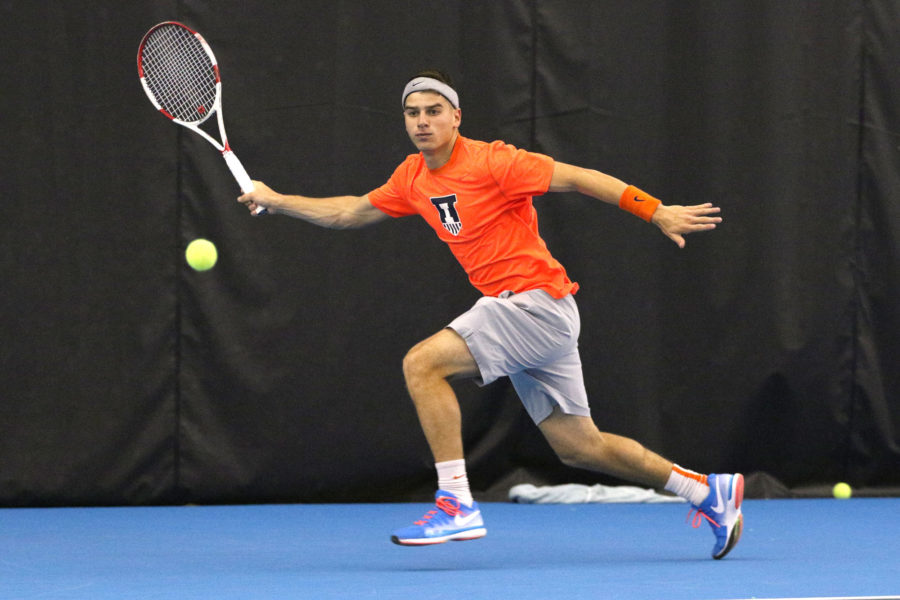 The Illinois men’s tennis team is set to open its fall season this weekend at Texas A&M, but a few big names are absent from the lineup.

Seniors Jared Hiltzik and Brian Page, along with sophomore Aleks Vukic, will not be competing in College Station, Texas, and will most likely not be around until the spring season.

Each of the three will be taking the fall season off from college and will be competing in professional tournaments.

Only Hiltzik has stayed open to the possibility of joining the team at some point this semester.

Missing such vital parts to the team, the rest of the Illini will now have a chance to step up and lead the team.

One of those players will be Alex Jesse, the redshirt junior out of Mequon, Wisconsin. Jesse said he is up for the challenge and he has worked throughout the semester on getting to this point.

“I was kind of struggling coming in here for the fall with my mentality and attitude on the court,” Jesse said. “This week I feel like I’ve been doing a lot better with how I walk out on the court and handle myself out there.”

Sophomore Aron Hiltzik will also try to make his name throughout the fall season.

Hiltzik is coming off a stellar freshman season where he was a first-team All-Big Ten selection. He has caught the eye of the NCAA, coming into the season ranked in the top 50 of the Intercollegiate Tennis Association Division I preseason rankings. But Aron plans to aim somewhat higher than his top-50 ranking.

“Last year I had a goal, and my goal is to be an All-American,” Aron said. “It was kind of tough to get ranked high while playing in the three and four spot, so I’m just glad to be ranked high, and now I’ll be in the main draw of All-Americans this year.”

Another interesting aspect of this weekend will be how the Illini freshmen perform in their first event.

Asher Hirsch and Pengxuan Jiang may be rookies, but according to Hirsch, he thinks they are ready to step up and play at the collegiate level.

“I’m pretty excited to get my first college matches in because I’ve put a lot of work in so far,” Hirsch said. “I’m pretty confident because we’ve been working hard and that is just building upon the confidence for us.”

The Illini will have their first chance of the season to make their mark this weekend at Texas A&M during the Conference Challenge, where, according to head coach Brad Dancer, Illinois will face some high quality opponents.

“Everybody will be good there,” Dancer said. “It is going to be a strong tournament.”

Most players on the team have not competed for over a month, so Dancer says he is using this event to gauge where his team is.

“I’m sure we will be growing a lot on day one,” Dancer said. “We’ll fight and we’ll compete, and then we’ll come out with a much better idea of where we are with our guys.”