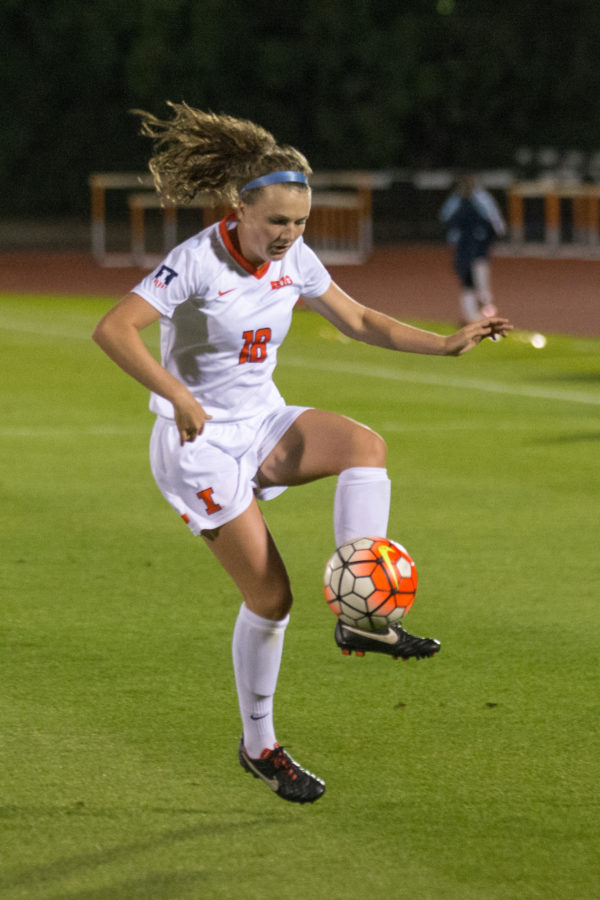 Illinois defender Morgan Maroney receives a pass during the game against TCU on August 28. Illinois won 5-2.

The Illinois soccer team is returning home to play it’s next set of Big Ten games Thursday and Sunday.

The Illini failed to win a game when they began conference play last weekend against Indiana and Purdue, but the feeling of this week’s matches should be a bit different.

Janet Rayfield and company are taking on Rutgers followed by Maryland in what will be the first ever games between the teams in Champaign.

No. 2 Rutgers should prove to be the toughest test to date for the Illini.

The Scarlet Knights are undefeated on the season at 8-0 (1-0 Big Ten).

While Rutgers has spread out its 10 goals this season, the team’s defensive play has been no less than perfect thus far.

Rutgers has not allowed a goal so far in 2015, shutting out all eight of its previous opponents — including Maryland in its last match.

Maryland should pan out to be a much easier task for the Illini, as the Terrapins currently sit near the bottom of the Big Ten standings with a 5-4 record (0-1 Big Ten).

The Illini were scoring in bunches early on in the season, with 13 goals in their first four games.

Since then – in Illinois’ last five matches – four goals have been scored.

While the defense has been consistent for the Illini, the team needs to get going offensively if they want to be the first team this season to score against Rutgers.

A tough task, no doubt, for the Illini, but Rayfield thinks her team can get it done.

“The thing that has been consistent is our ability to create chances,” Rayfield said.

She said if her team continues to create chances and plug away at the goalie, good things will happen.

As for Rutgers’ ranking, Rayfield says her team is not worried about that.

“The goal is that we keep the excitement the same because whether they are ranked second in the country or are not in the national rankings, every Big Ten team is good,” Rayfield said. “I think that was why we really had to have the wake-up call this past weekend.”

While Rayfield is telling her team to ignore the ranking and show up to play, she said that the same intensity and effort is required to beat Maryland.

The coach applauded the Big Ten conference as a whole.

“Whether it’s Rutgers or any other team in the Big Ten, if it says Big Ten team, you better bring your A-game,” Rayfield said. “Rutgers (and Maryland) are Big Ten teams and they’re coming to our place, so we gotta bring our A-game.”