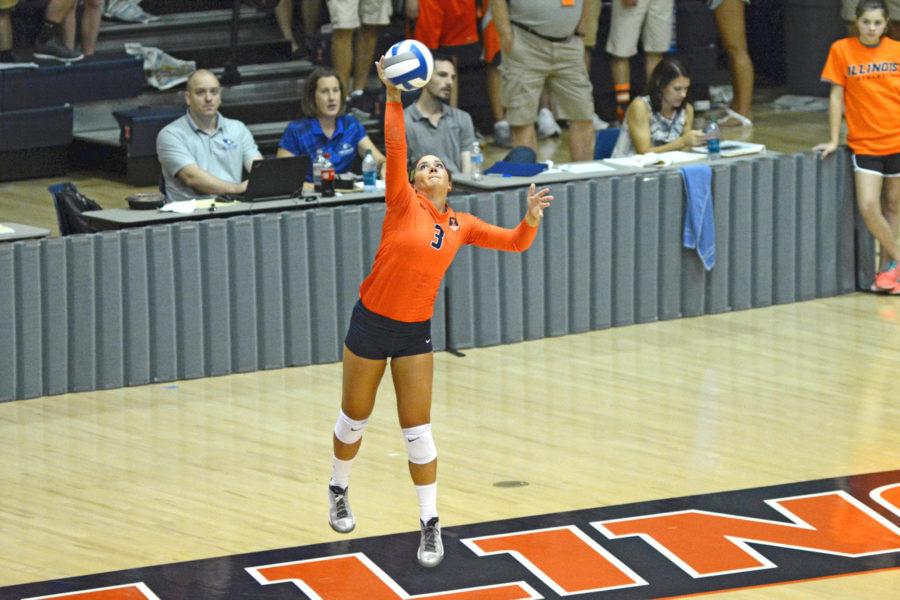 Rutgers and Maryland are out for revenge.

Illinois swept Maryland and Rutgers at Huff Hall in the opening two matches of conference play last season. Double-doubles from outside hitter Jocelynn Birks (15 kills, 10 digs, .444 hitting percentage) and setter Alexis Viliunas (14 assists. 10 digs) spearheaded a victory against the Terrapins on Sept. 26, 2014. A day later, Birks posted 12 kills, seven digs and a .360 hitting percentage to lead the Illini over the Scarlet Knights.

Illinois head coach Kevin Hambly said the new-look Terps boast talented youngsters that his team will have to keep in check. Hambly said Maryland head coach Steve Aird — who helped Penn State win a championship last season as an assistant – did a great job of securing recruits who are ready to contribute immediately. 6-foot-1 outside hitter Liz Twilley and her team-leading 147 kills are at the top of that list of players to contain. Redshirt senior and fellow outside hitter Adreené Elliot is another Terrapin that could potentially cause problems for the Illini defense.

But Illinois’ defense has been stalwart thus far — especially in last weekend’s Sun Devil Invitational, which included a 25-7 second set against Texas Southern. The victory over the Tigers marked the second time this season the Illini held an opponent to fewer than 10 points in a set. The other time their defense met that feat came on Sept. 12, 2015 in a 25-9 second set against South Dakota State.

Though Hambly’s high-tempo offense can be explosive at times, he has stressed the importance of defense heading into Big Ten play.

“We start to pick the lock defensively, and hopefully we start to shut teams down,” he said.

Starting libero Brandi Donnelly is the heart of Hambly’s defense. The five-foot-eight sophomore from Williamsville, Illinois, has 169 digs through 37 sets played for a tremendous 4.57 digs per set.

On the offensive side, junior Katie Stadick has established herself as one of the premiere middle blockers in the nation. Through 11 matches, Stadick has 103 kills and 21 errors for a .404 hitting percentage — good for 42nd at any position in the country. She won tournament MVP at the Shocker Classic two weeks ago and continued her solid play in Tempe, Arizona this past weekend.

After Illinois’ meeting with Maryland, the team will take on a less-talented Rutgers squad. Like the Terps, the Scarlet Knights have lost four of their last five matches. But Birks is adamant that the team must take every opponent seriously — a recurring theme for Illinois in this still-young season.

“All the (Big Ten) teams have a lot of fight and they’re all scrappy, and that’s kinda how we are,” Birks said.

Friday’s match will be the first taste of Big Ten play for Illini freshmen Ali Bastianelli, Beth Prince and Jordyn Poulter. According to Birks, they’re ready for the challenge.

“They’ve been pretty prepared since day one,” she said. “They know we need to focus on us more than focus on what (the other teams) are doing.”

Stadick echoed her teammate’s statement regarding the three freshmen before offering her own advice.

“I would tell them to keep grinding out points and working hard in the gym and practice because it’s only gonna help in the long run.”