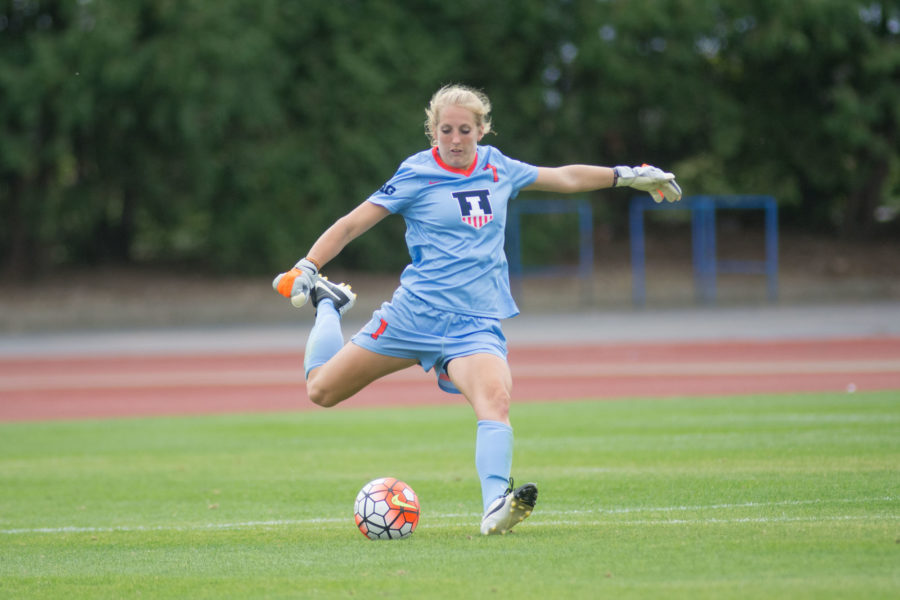 A statement-making performance this week is just what the Illinois soccer team needed to prove that it still means business.

The Illini returned home for two matches after a disappointing showing in Indiana last weekend.

On that road trip, Illinois tied 0-0 with a Hoosiers team that they were expected to beat and subsequently lost to Purdue 3-1 two days later.

It was not supposed to get any easier for Illinois this week, as Janet Rayfield and company faced a Rutgers team Thursday that was ranked No. 11 in the country heading into the match.

Rutgers sported an 8-0 record, and had not given up a single goal leading up to its match against the Illini. Illinois stepped up to the plate, defeating the Scarlet Knights 2-1 and moving to 7-2-1 in the season.

Allison Stuckey was the first to get on the board against a stingy Rutgers defense, and Kara Marbury sealed the deal with a goal in the final 10 minutes of the match.

“We had nothing to lose, and they had a nice target on our back,” Stuckey said. “(They came in) undefeated, (allowed) no goals and we were like, ‘We’re gonna get em.’”

Sunday was set up to be an easier matchup for the Illini, as they faced off against a Maryland team that is 5-5 and has yet to win a conference game. The Terrapins showed up to play however, further supporting coach Rayfield’s claim earlier in the week that, “(the Big Ten) is a different game.”

It was a physical matchup to say the least, with both teams pushing and shoving, advancing the ball aggressively in hopes of gaining the upper hand. Illinois struck first in the eighth minute on a score by freshman Katie Murray.

Murray’s goal was made possible by a signature, flip throw-in by Nicole Breece, who found Murray right in front of the net on the left side. The freshman smacked it into the left corner.

Alex Anthony of Maryland drew Illinois goaltender Claire Wheatley out of the net, leading to a strike that Wheatley barely blocked.

After the shot, both players became tangled on the ground. Wheatley was given a yellow-card, and Anthony was given a penalty shot that she would capitalize on, tying the game at one.

Illinois coaches were visibly upset, criticizing the refs for what they believed was a bad call — assistant coach Jeff Freeman even received a yellow-card.

The match would not be settled in regulation, and headed to OT. Breece was the hero for the Illini, breaking the tie and scoring on a header in the 118th minute off a Hope D’Addario cross.

Rayfield applauded her team after the match for looking beyond the controversy and finding a way to win.

“My biggest thought right now is that with everything that was going on, I don’t know that I’ve ever been that animated on the sideline,” Rayfield said. “This team just stuck with it, and that’s what I wanted them to do.”