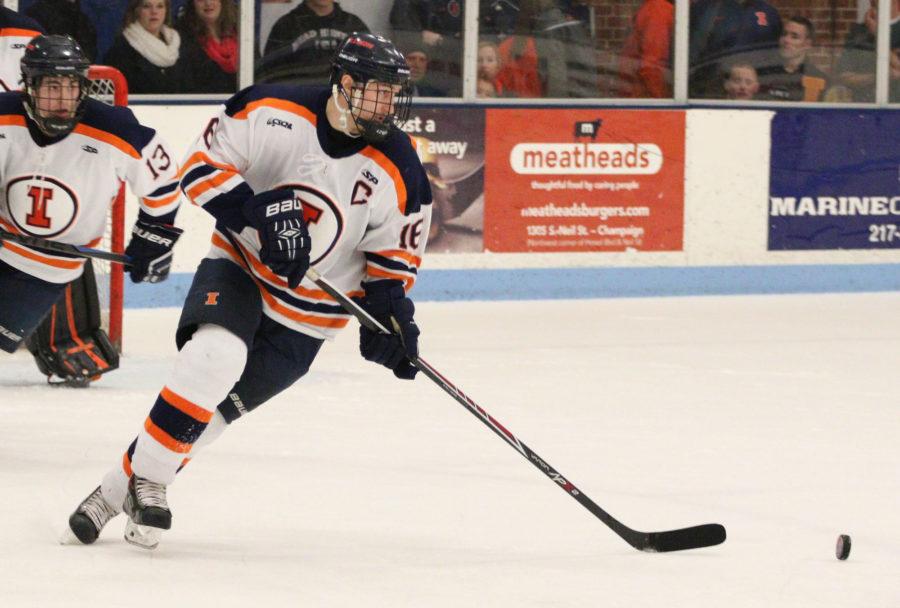 Illinois’ John Olen (16) manuevers the puck down the rink during the hockey game vs. Robert Morris at the Ice Arena on Saturday, Jan. 24, 2015. The Illini lost 4-3.

Illinois Hockey was very confused when it left Norman, Oklahoma, this weekend.

The Illini (2-1-1-0) played right with the Sooners (2-1-1-0) in the first game on Friday night. Matching Oklahoma’s physicality, Illinois tied the game late and sent it to overtime with a goal from senior forward John Olen.

“After that equalizer goal, we definitely felt like we were carrying the play,” Olen said. “But with overtime being four-on-four the entire time, it really changes the game. Both teams are going to get their opportunities. (Oklahoma) just capitalized on its.”

Oklahoma scored the game winner with only seconds left in the overtime period. Olen said the Illini were confident that if they forced it to a shootout then they would have won.

“I thought we played well on Friday, and I think we deserved to win that game,” said head coach Nick Fabbrini. “Saturday we just didn’t show up, and it was really frustrating.”

The game Saturday featured a different Illini squad. According to Olen, Illinois did not come out with the same intensity in the 7-0 loss to Oklahoma.

The Illini were beat up after the overtime loss the night before. They had two players who suffered injuries in the first game.

Sophomore defenseman Joey Caprio suffered an AC sprain in his shoulder, and junior defenseman Aaron Dusek injured his hand and was having trouble holding his stick before the second game. Both players did not play in the game on Saturday and will be reevaluated this week.

According to Fabbrini, those injuries were “no excuse” for how his team played Saturday. Fabbrini said he believes that even if one guy goes down, they have players to fill the spots.

With two players hurt, the Illini struggled to stay disciplined. They were unable to keep players out of the penalty box, and junior defenseman Austin Zima said the games just left him confused.

“It was just a weird weekend,” Zima said. “One game we are taking a top-10 team to overtime in a game we probably should have won, and then the next night the same team is making us look like we don’t even belong on the ice with them.”

The Sooners had a power play for the first eight minutes of the first period, but the Illini were able to kill the penalty without any damage done. Late in the second period Fabbrini’s team had to try to kill another penalty for five minutes. The penalty overlapped into the third period. The Illini did not make it out of that one with the same good fortune. Oklahoma capitalized scoring four of its seven goals in the span.

According to Olen, the team gains momentum when they can kill a penalty without giving up a goal. But whenever Illinois killed one penalty, another one immediately followed, giving the Illini no time to build any offense.

Zima called the first game a “dang good hockey game to be a part of, but we just ended up on the short end of the stick.”

He blamed the team’s self-destructive tendencies for the loss Saturday.

“It’s frustrating when we keep reverting back to the same things that we are working hard to get past,” Zima said. “We need to learn that we can’t control everything on the ice. We can’t control it if the referee decides to put his hand up. We just need to accept it and keep focusing on the game.”