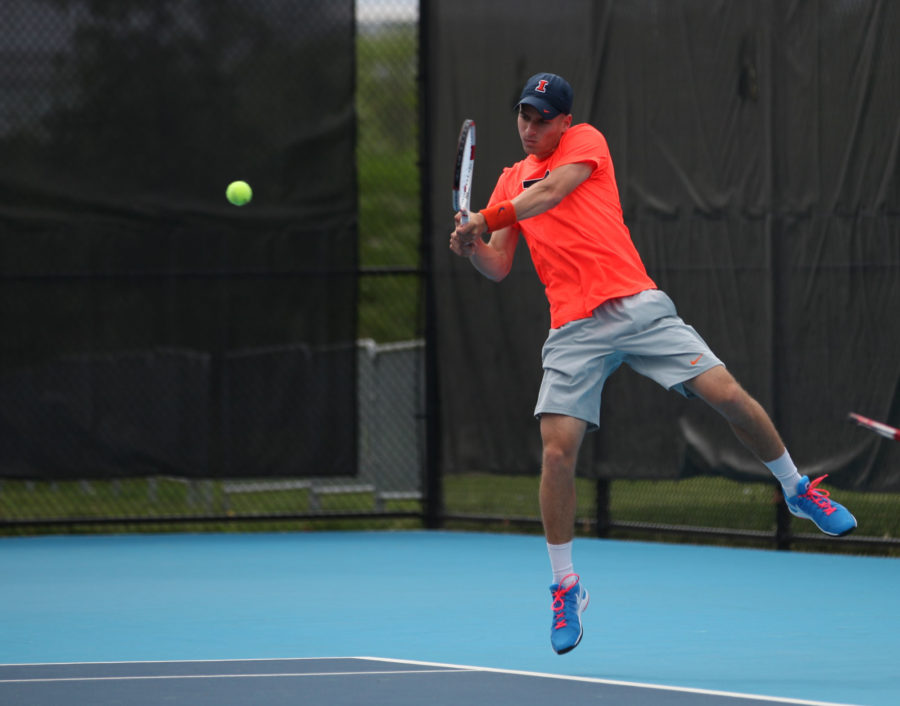 The long-awaited season opener for the Illinois men’s tennis team closed with a hopeful finish for a few young players.

The Illini, who are playing without three of their top players — Jared Hiltzik, Aleks Vukic and Brian Page — traveled to Texas A&M for the Conference Challenge and head coach Brad Dancer was not sure how his team would perform.

Asher Hirsch answered his coach’s questions. The freshman began the singles portion of the event by winning his first three matches against players from Texas A&M and Harvard. Hirsch finished 3-1 in singles with his only loss coming against No. 55 AJ Catanzariti of Texas A&M. Overall, he ended the tournament 3-1 in singles and 1-1 in doubles. He said that his strong first match was a product of months of practice.

“I really just trusted the hard work that I’ve put in during the first few months at Illinois and it definitely paid off,” Hirsch said. “I just kept battling out there.”

Along with Hirsch, redshirt junior Julian Childers led Illinois throughout the weekend. Childers finished 2-2 in the singles portion, and according to Dancer, he had one of the more impressive performances of the tournament. Childers found himself down 3-0 in one set on Sunday but battled back for a win.

“He had a rough start, but dialed in his focus and got himself where he needs to be in competing down the stretch,” Dancer said. “I think he fought back and showed great perseverance out there.”

The Illini’s top-ranked player in the lineup, sophomore Aron Hiltzik, struggled throughout the early rounds in singles, losing his first three matches. However, Hiltzik managed a win in round four against No. 117 Nicky Hu of Harvard.

Hiltzik and Childers lost 8-4 against No. 3 Felipe Soares and Hugo Dojas of Texas Tech. But Hiltzik and fellow sophomore Toshiki Matsuya battled back to take down Texas A&M’s No. 1 team of Catanzariti and Jordi Arconada.

Despite the rough weekend, Hiltzik was positive with how much he progressed throughout.

“I definitely had to battle a lot of parts in my head, I would say I was having trouble staying mentally tough,” Hiltzik said. “I had a little bit of rust coming in, but overall I progressed through the whole tournament and grew stronger mentally.”

According to Dancer, this week was more about laying the foundation for the rest of the season than focusing on wins and he said he believes the Illini accomplished just that.

“We had some good performances even though some guys struggled confidence-wise,” Dancer said. “We competed hard and we saw some good things out of Childers and Hirsch had a couple good wins himself.”

The Illini’s next chance to build upon their young season will come on Oct. 3-11 at the Intercollegiate Tennis Association All-American Championships in Tulsa, Oklahoma.