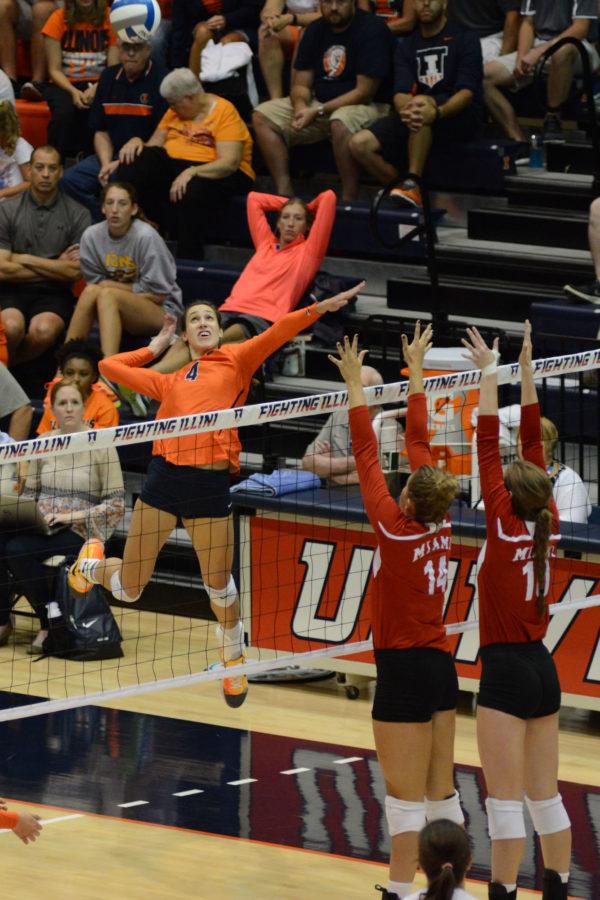 Illinois’ Michelle Strizak (4) attempts to spike the ball during the game versus Miami at Huff Hall on Saturday, August 29, 2015.The Illini won 3-0.

The No. 9 Illinois volleyball team (11-2) started off Big Ten play with two convincing sweeps of conference foes, Maryland and Rutgers.

Against the Terrapins in College Park, Maryland, the Illini offense took control throughout the match and never faced a deficit greater than two points. Five Illini recorded six or more kills. Four Illini ended the match with a hit percentage above .400.

Maryland relied heavily on outside hitter Adreene Elliott, who led the match with 12 kills and three aces. Her production wasn’t enough to keep the Terrapins from losing their fourth-consecutive match, which they followed with a loss to Northwestern the following night.

Outside hitter Michelle Strizak said the Illini came in knowing Maryland’s most effective attacks came from the right side and middle. The team was able to anticipate the attack and force the Terrapins to play from their weak side.

Illinois rode the momentum from its first Big Ten win into New Brunswick, New Jersey, to take on Rutgers. The Scarlet Knights have struggled since entering the Big Ten and currently have the worst record in the conference.

Head coach Kevin Hambly said his team’s physicality coupled with Rutgers’ multiple injuries gave the Illini the edge in the matchup. However, his team still made sure to respect the Scarlet Knights despite its advantages.

“What we were told is that they have been getting a lot better, so we needed to expect a good fight,” Strizak said. “We wanted to take it to them. It’s not necessarily about who we are playing, but how we are playing and how we can get better.”

Illinois’s offense once again overpowered its opponent, with Strizak leading the way with 15 kills. Outside hitter Katie Roustio and middle blocker Katie Stadick followed closely behind with 13 and 12 kills, respectively, along with three blocks apiece. Overall, the offense hit over .400 for the match, and limited Rutgers to a .135 hit percentage.

The team’s only sign of weakness in the match occurred during the first set when the Illini, who were up 21-10, allowed the Scarlet Knights to go on a 10-4 run. Although the team would eventually win the set, Hambly was disappointed with his team’s effort.

“We wanted them to win, but I also wanted to see them play at a high level, which they weren’t,” Hambly said. “We don’t want to be about that because it’s a process and we want to get better.”

With the two wins, Illinois is now 8-2 away from Huff Hall. The Illini will be looking to add to that record with its last two road trips to take on Wisconsin and Minnesota this week before a four-match home stand.