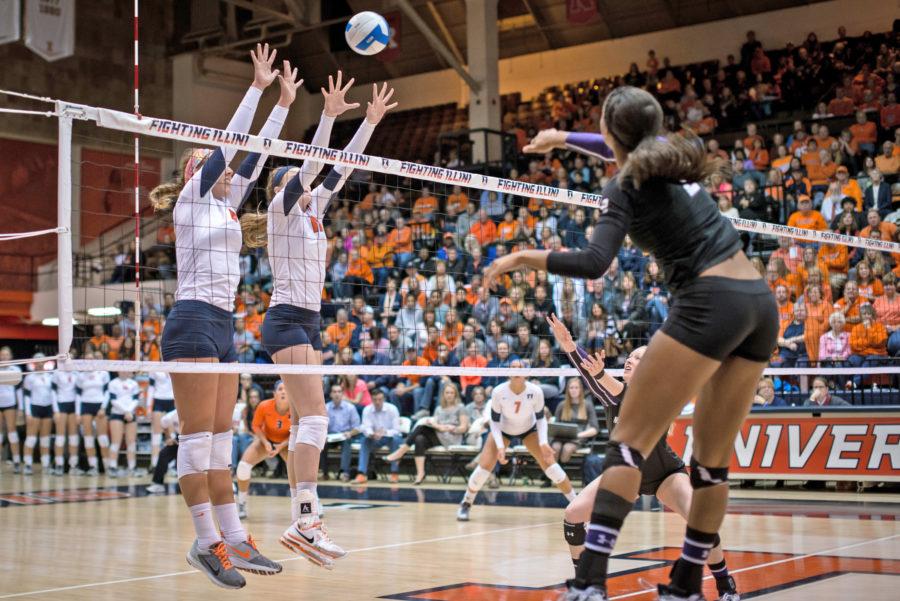 Illinois’ Katie Stadick (12) attempts to block a spike during the match against Northwestern at Huff Hall on Saturday, November 8, 2014. The Illini won 3 of 4 sets.

The Illinois volleyball team (11-2) put forth two strong defensive performances in its weekend sweeps of Maryland (10-6) and Rutgers (3-10).

The team out-blocked its opponents by a significant margin, recording 11 and nine blocks against Maryland and Rutgers, respectively. Middle blocker Katie Stadick led the category with 10 blocks on the weekend, recording seven in the Maryland match.

The blocking effort contributed to low hit percentage from both of the Illini’s weekend opponents. Maryland was held to a .064 hit percentage, which factors in the 26 errors the Terrapins committed. Rutgers recorded nine fewer errors and managed a .134 hit percentage, despite connecting on two fewer kills than Maryland.

Defensive specialist Brandi Donnelly said the team’s strong defensive play was in part due to how much energy the squad brought to each matchup.

“We knew we had to bring a lot of energy because there wasn’t going to be a big crowd,” Donnelly said. “I thought we did a great job of bringing a lot of good defensive energy which is the spark of our team.”

The Terrapins did their best to target their hits away from Donnelly, a member of last year’s Big Ten All-Freshman Team. It was the first match of the season where Donnelly did not lead the team in digs.

Instead, defensive specialists Julia Conard and Danielle Davis tied for the most digs for Illinois with nine, followed by the eight recorded by Donnelly and opposite hitter Ali Stark.

Head coach Kevin Hambly had no problem with Donnelly not being the digs leader, especially since it allowed her to be effective in other ways.

“They weren’t hitting at Brandi, which is smart,” Hambly said. “I wouldn’t hit at Brandi either. They attacked the middle of the court and the right side a lot more. It’s good that they don’t hit at Brandi because then she can take more court and give more people help.”

Donnelly returned to form the following night with 19 digs. It was 11 more than Davis, who recorded the second-most on the team.

Rutgers and Maryland drop to the bottom of the Big Ten

Illinois’ victories over Rutgers and Maryland may be its easiest tests of the conference season.

The Scarlet Knights were facing injury troubles heading into the match, which has contributed to the team losing six of its last seven. Rutgers now sits last in the Big Ten standings.

Maryland is on a five-match losing skid after winning its first nine. Both teams also lost to Northwestern at home over the weekend and will go on to play at Indiana and Purdue this week.

Illinois, on the other hand, will continue to be tested by one of the best conferences in the sport. It travels on Wednesday to Wisconsin (8-4), which is 0-2 in the Big Ten but has only lost to perennial powerhouses Penn State and Ohio State.