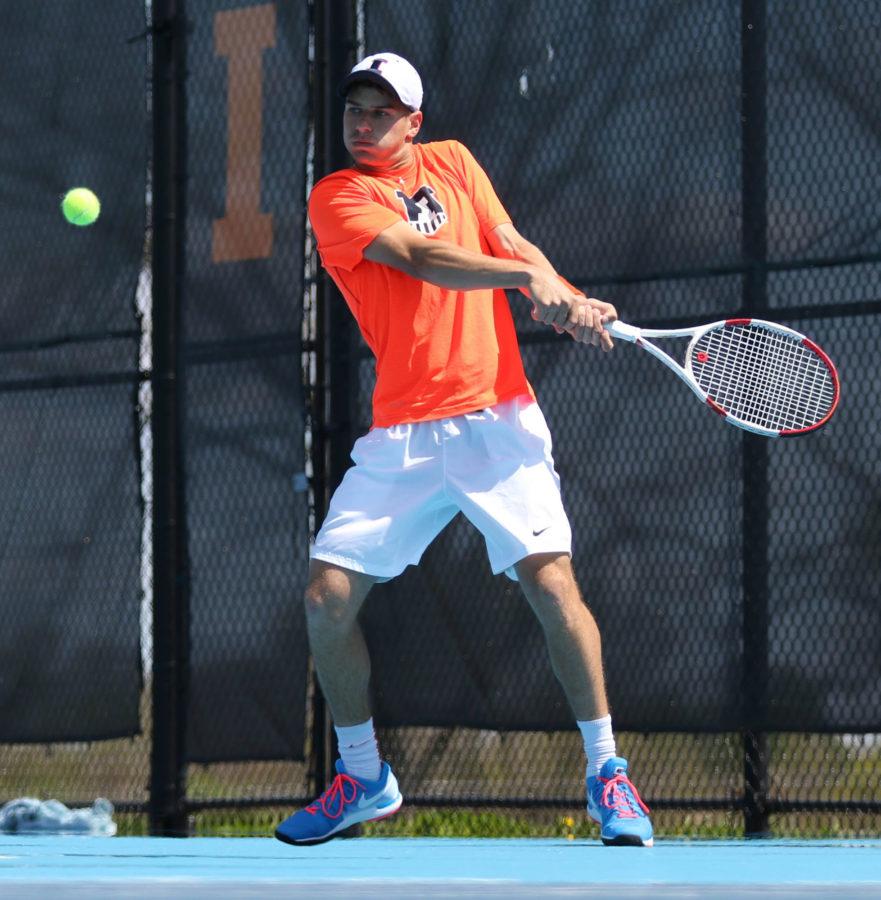 The Illinois men’s tennis team had a short turn-around this week as it prepared for the ITA All-American Championships Oct. 3-11 in Tulsa, Oklahoma.

The team returned on Sept. 27 from its first event of the year at College Station, Texas, where it managed 11 wins in 37 total matches. Heading into this weekend’s All-Americans, the team has been on a grind to prepare, but according to Assistant Coach Marcos Asse, athleticism isn’t the issue, despite the team’s poor start at Texas A&M.

“I have zero doubts about any of the players on the team and their physical abilities,” Asse said. “It just comes down to what are you uncomfortable with in competition, and those are the kind of things we are learning and really working on.”

Individually, the players seem ready for one of the biggest matches of their fall season. Redshirt junior Julian Childers is coming off one of his better performances, going 3-1 in singles at Texas A&M, and he says his confidence is higher than ever.

“I think I can hang in there with a lot of the best guys when I’m playing my best tennis,” Childers said. “I am definitely confident, and I’m looking forward to taking out some of the top guys and moving on up.”

Childers is one of four players who will be competing in the pre-qualifying draw at All-Americans, along with freshman Asher Hirsch, redshirt freshman Pablo Landa and sophomore Toshiki Matsuya.

Alongside the pre-qualifiers, the Illini will feature sophomore Aron Hiltzik in the main draw of All-Americans. Hiltzik’s top-50 ranking helped him break into the pool. He will be the third Illinois player in the main draw in the last two years, joining his brother, Jared Hiltzik, and Tim Kopinski, who played in 2014.

Aron Hiltzik struggled at Texas A&M, but said he feels that he can take what he learned, and apply it to this weekend.

“After the tournament (at Texas A&M) went on I progressed, and I grew a lot mentally,” he said. “Now I feel like I can just keep building off of that and put in work and just battle.”

Hiltzik is not the only one confident in his abilities. Asse said he also believes that Hiltzik has a great shot to go deep into the main draw.

“Aron is physically good enough to win the tournament,” Asse said. “He just needs to stay within himself and engage in the battle of tennis. If he does that, there is no one out there that can match him.”

The tournament will feature some of the top players across the U.S., including most of the players ranked in the top 125 nationally.

The Illini will have their work cut out for them, but Asse said he believes that the team has a strong opportunity.

“Every single one of those guys has a great chance to make a run through the tournament,” Asse said. “I would stack these guys up against anybody.”