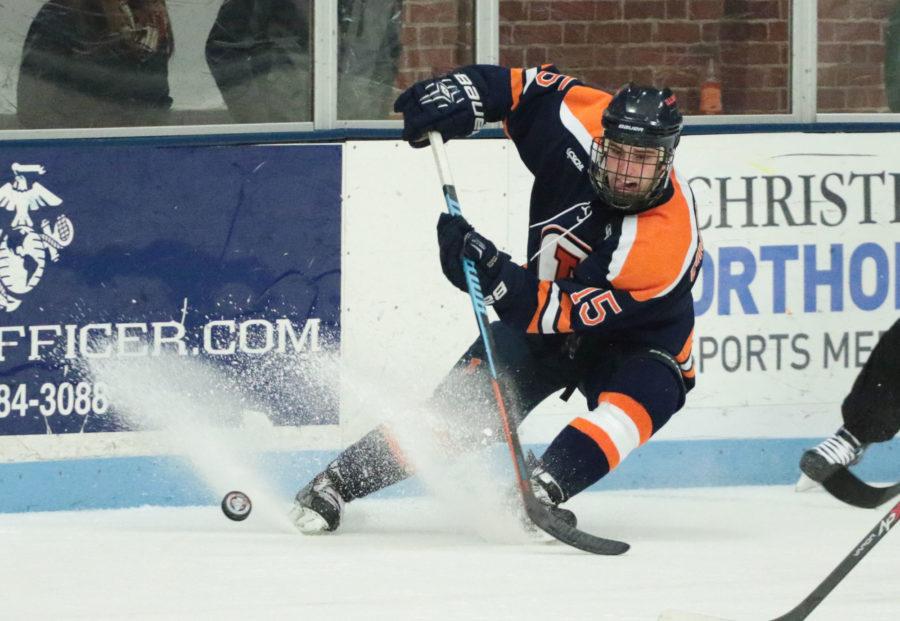 Playing in Chicago at Johnny’s Ice House, the practice facility of the Stanley Cup champion Chicago Blackhawks, is nothing new for the Illinois hockey team — as they have hosted a series there for the past three seasons.

The Illini’s opponent, however, is one they have very little experience with.

Friday, Illinois (2-2) will begin a two-game series with Alabama (2-0), a team playing its inaugural season in the American Collegiate Hockey Association.

Despite being a rookie in the league, the Crimson Tide wasted no time securing the program’s first pair of wins in their season-opening series at West Virginia on September 11-12, coming away with 6-3 and 5-2 victories, respectively.

“They’ve got a number of talented players and quite a few Chicago kids,” Illinois head coach Nick Fabbrini said. “We expect them to be a hard-working team, but we’re focusing on what we can control and improving in the areas we need to. If we don’t show up ready to play, it could be a very difficult weekend for us.”

The Illini need to improve on getting more shots on goal early in the game, while limiting those of their opponent. Twice this season the Illini have found themselves in multiple-goal deficits after the first period and have only once scored in the first 20 minutes of a game all season.

Limiting Alabama’s scoring opportunities early will be a challenge for Illinois considering it will be without two injured defensemen: junior Aaron Dusek and sophomore Joey Caprio. With a depleted starting line, sophomore wing Eric Cruickshank said the Illini forwards will have to chip in and bear some of the defensive responsibilities.

“We all just have to be better,” Cruickshank said. “We have guys capable of playing their roles, but obviously it hurts losing two of your top guys. From a center position standpoint, we can’t be lackadaisical in the defensive zone. If our centers and wings step it up, we’ll be just fine.”

Fabbrini and his team said they believe they’ll get a little extra help from the crowd this weekend. Although the Crimson Tide has six players form the Chicago area, the Illini still claim the Windy City as their own and expect a home-game feel this weekend.

“We’re not just a team known in the Champaign area, we’re a state-wide school,” Cruickshank said. “Chicago has known about Illinois hockey for years. There’s a lot of both hockey and University alumni up there and a lot of parents that will get to come watch. It’s always a cool experience playing in that area.”

If the Illini want to stay above .500 and avoid dropping in the ACHA standings, they’ll have to put together a full 60 minutes of hockey in both zones, something Fabbrini said he believes his team still hasn’t accomplished. Both Fabbrini and his players said they think that the problem is in their preparation — mentally and physically — and the only way to improve is through practice and experience.

“We’ve talked about it, and we know we need to be more focused in practice,” Fabbrini said. “If you don’t bear down and finish when you get opportunities in practice, then you can’t expect to so in a game.”