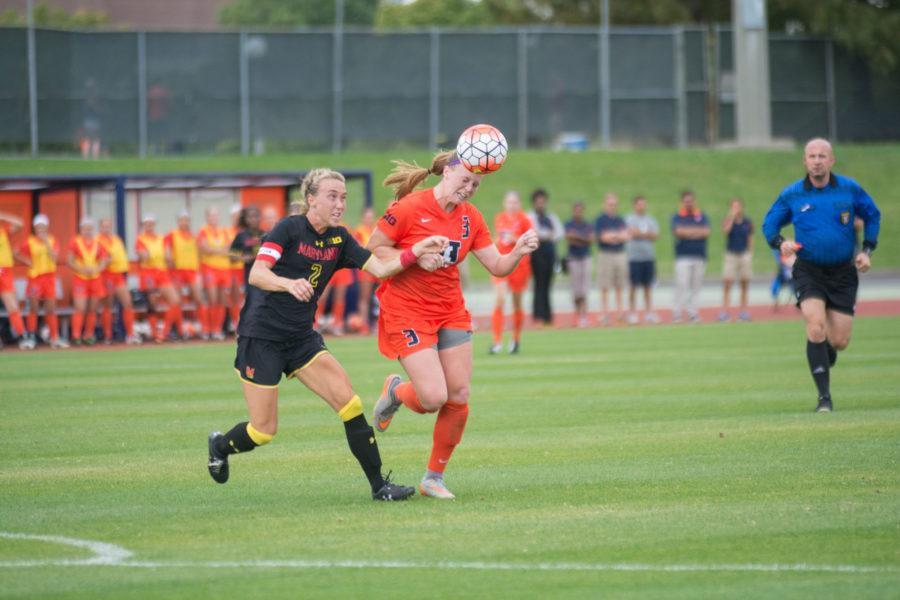 Jannelle Flaws heads the ball forward during the game against Maryland at Illinois Soccer and Track Stadium on Thursday. Illinois won 2-1 in double overtime.

If it were up to the Illinois soccer team, the remaining games on its schedule would be played at home. The team boasts a 6-0-0 record at the Illinois Soccer Stadium. Unfortunately, due to NCAA rules, the Illini are forced to play away games.

But before Illinois (8-2-1) heads back on the road, it will try to continue its home success Friday against Ohio State (6-3-2).

Illinois is riding a two-game win streak after defeating then-No. 11 Rutgers and Maryland last weekend. Ohio State on the other hand, has struggled in its previous four games, going 1-2-1 — all against Big Ten opponents.

Despite the Illini’s impressive home record, head coach Janet Rayfield said she knows nothing is guaranteed, especially in conference play.

One challenge Ohio State poses is its diverse scoring threat. Nine different Buckeyes have contributed to the team’s 18 goals this season. On the other side of the ball, Ohio State’s defense has allowed 11 goals this year.

With Ohio State possessing an arsenal of players who can find the back of the net, Rayfield said Illinois must focus on maintaining a solid defensive effort that targets every attacking player.

In addition to maintaining a strong defensive unit this weekend, Rayfield wants Illinois to carry its momentum from its past two games. Rayfield believes that focusing on the small aspects of the game can help continue her team’s win streak.

“If you watched the Rutgers and Maryland games we competed in every moment,” Rayfield said. “Every moment of the game was a competition, every ball that we tried to win, every restart we were focused on. We tried to focus on the moments instead of on the season.”

While the Illini’s previous two games have been triumphant, they took a toll on some of the players. One player in particular is Illini leading goal-scorer Jannelle Flaws.

Flaws has not scored a goal in five games when Illinois defeated Portland 1-0. That game was Sept. 6.

The redshirt senior is battling chronic plantar fasciitis. She’s taken it easy in practice this week but will play Friday.

“I love being able to play with the team, you obviously build chemistry through practice and playing,” Flaws said. “It’s a little bit unfortunate not getting that and having to sit out, but this is what is probably what’s best for me to get healthy. As much as I hate sitting out and being injured, it’s what’s best for the team.”