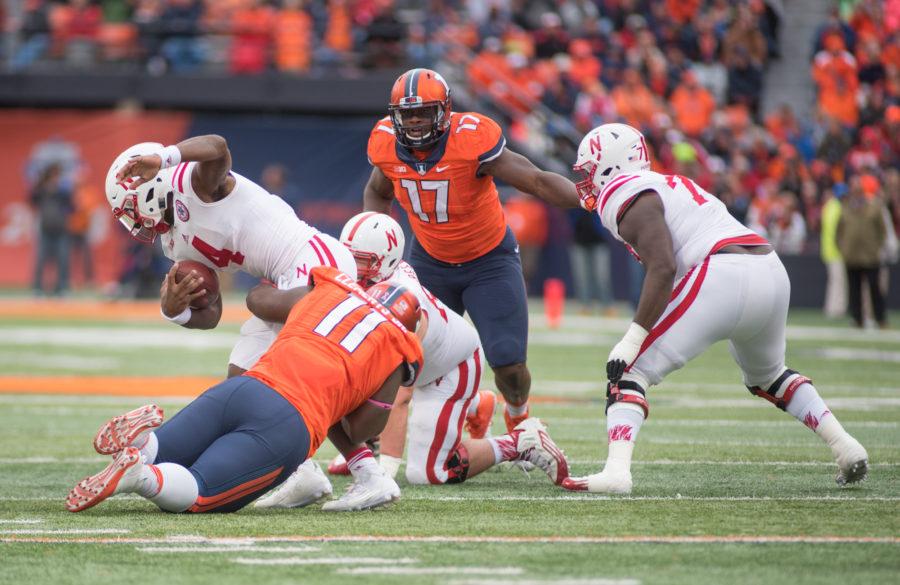 The Illinois offense was average Saturday, until the fourth quarter.

Wes Lunt led the game-winning six-play, 72-yard touchdown drive that began with 51 seconds remaining on the game clock. He got the Illini down the field with a 50-yard pass to Malik Turner and capped it off with a one-yard touchdown pass to Allison.CH

But six dropped balls and moments of confusion between receivers and Lunt proved costly. The pass-centered offense struggled with the strong winds and had to rely on its rushing for most of the game.

The Illini offense finished with 382 total yards, including 131 on the ground. Lunt ended with 251 yards through the air. It was the second consecutive game that the Illini have not turned the ball over.ch

The defense got the win for Illinois, holding Nebraska to just 13 total points. None of those points came in the fourth quarter as the offense came back to win in the final minute.CH

Illinois held the Cornhuskers to a season-low 292 yards — their previous low was 445 yards against BYU in the Cornhusker’s season opener. The Illini defense held quarterback Tommy Armstrong Jr. to 105 passing yards, his lowest total this season and his second lowest total in the last two seasons. Mason Monheim and T.J. Neal both recorded 10 tackles. Clayton Fejedelem recorded his first career interception, which he returned for 18 yards.

The defense has been good at forcing the opponent off the field quickly. The Illini forced six three-and-outs Saturday, improving its total to 30 three-and-outs this season.

The winds were a factor, but Illinois’ special teams still struggled.

Illinois was forced to punt nine times, the same number as Nebraska. David Reisner eventually punted in place of Ryan Frain after Frain misfired on a series of short punts that put the Cornhuskers in favorable field position.CH

His biggest struggle was readjusting the game plan after losing Josh Ferguson to a shoulder injury. Freshman Ke’Shawn Vaughn played a bigger role, but Cubit said he planned to originally use the two running backs on the field together against the Cornhuskers after Vaughn’s breakthrough performance last week.

Cubit once again used his timeouts at strange times. He used two in the second quarter in attempts to ice Nebraska kicker Drew Brown during a field goal, but Brown still converted on it. Cubit used all of his timeouts before going into the last-minute scoring drive to win the game.