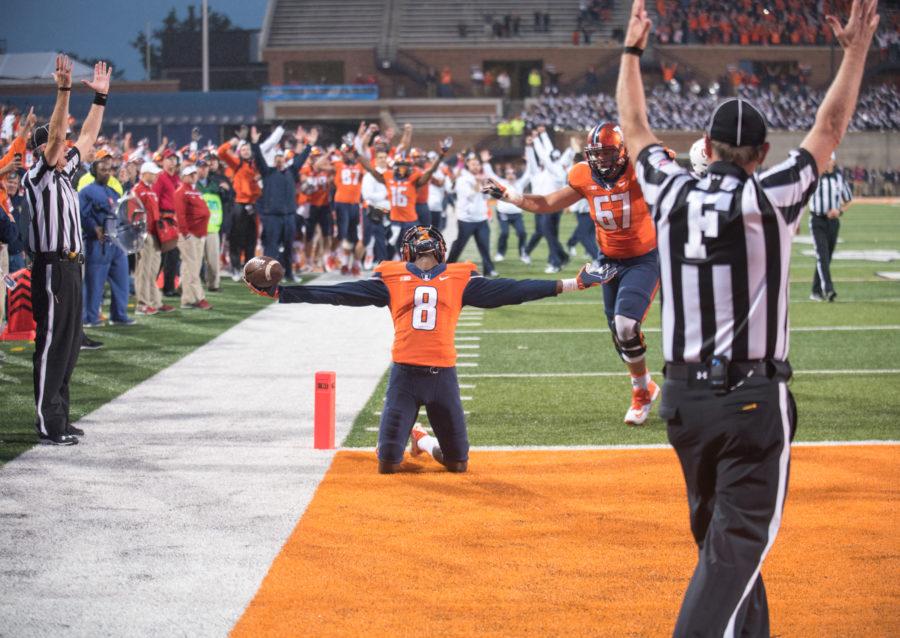 Celebrations in sports are funny things. They’re rarely for the sake of posterity — a spontaneous outburst isn’t about legacy.

Illinois football’s win over Nebraska Saturday sparked a different kind of celebration. In the seconds and minutes following Geronimo Allison’s go-ahead touchdown with 10 seconds left, everyone in Memorial Stadium seemed to comprehend, at least partially, the magnitude of the moment.ss

Allison saluted the heavens after scoring like a man saved from a desert island. Bill Cubit broke out an enormous celebratory fist-pump. Ted Karras and Nick Allegretti tried to get the team up into the stands of Block I to sing Alma Mater. Mike Thomas beamed when congratulating players running off the field.ss

And Illinois fans in the media room following the win gave Cubit a burst of applause when he arrived for his postgame press conference.

Everyone seemed to know that it was more than just a typical win.

It was Cubit’s first Big Ten win as head coach. It was the program’s first Big Ten-opening win since 2011 and first over Nebraska since 1924 — a stat that is skewed because of the teams’ relative lack of faceoffs, but sums up the evening nevertheless.ss

And Cubit knew it. When asked where this win ranked in his career, the coach cracked a smile and admitted it might be the best.

He allowed himself some personal reflection — which has been mostly absent from his mantra since being promoted.

He’s highlighted his student-athletes’ accomplishments, their struggles and their work ethics. He hasn’t given himself a lot of credit, and didn’t coach his best game Saturday. But he coached well enough to win, which means a lot more than any style points he might lose for how his team performed.

Cubit bucked historical trends Saturday night, becoming the first Illini head coach since John Mackovic to win his very first Big Ten game. Mackovic did that in 1988, and since then, three Illinois bosses have failed to win a single game in their first seasons leading the Illini — Tim Beckman, Ron Zook and Ron Turner all went 0-8 in conference in their first seasons.ss

Look, there is a lot for this team to clean up before it heads to Iowa City next week. With the exception of the final drive, the offense was stagnant and the special teams, both punting and kicking, struggled a lot against the Cornhuskers.

The Hawkeyes are 5-0 and bound to be ranked following their victory over No. 19 Wisconsin. And on the road, the Illini certainly will be the underdogs. But they got the Big Ten monkey off their backs. Sometimes teams have to win games to win more games, and this grind-it-out win against a storied program is ammunition for more.ss

It’s also ammunition for the fans. The next game at Memorial Stadium is homecoming, on Oct. 24, and the Illini could come into the matchup with the Badgers undefeated in Big Ten play. Imagine that.ss

That would draw out the fans that have so famously left Block I half-filled and allowed Nebraska fans to stuff the away stands Saturday night.

But at the end of it all, it was the Illinois fans, players and coaches who were in full-throated celebration.

This wasn’t a game that the Illini usually win. But they did, and the postgame celebration was one the likes of which don’t come around Memorial Stadium all that often.