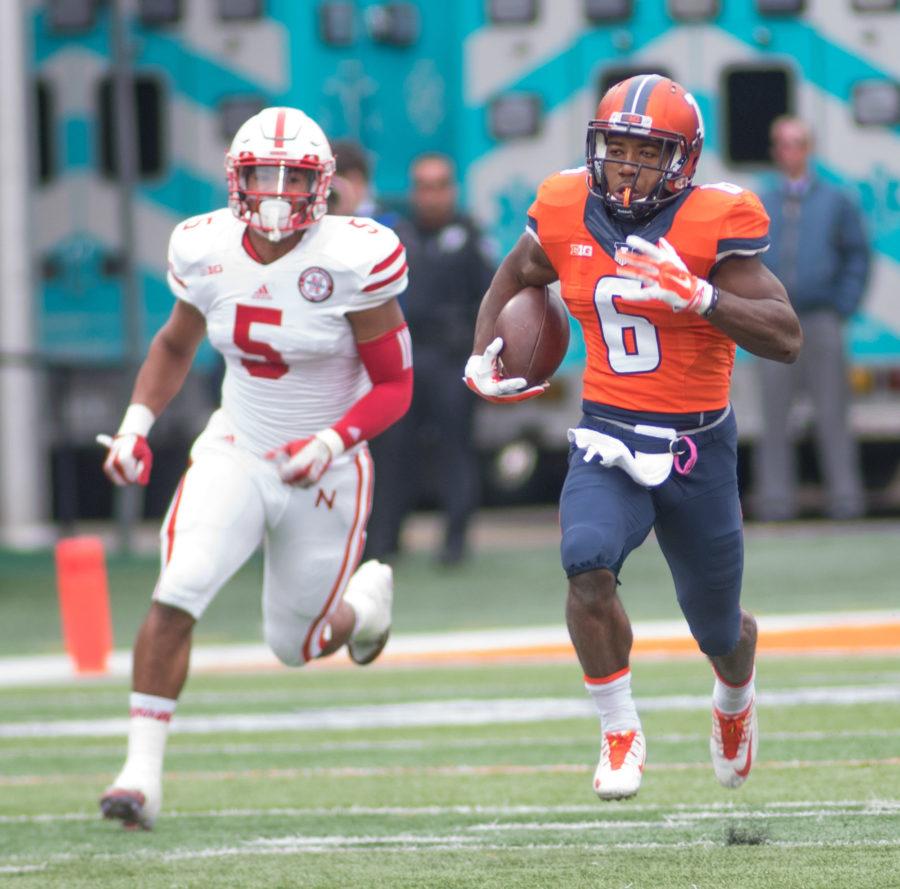 Illinois running back Josh Ferguson takes off down the field after breaking through the line of scrimmage during Saturday’s game against Nebraska at Memorial Stadium. Illinois won 14-13.

The injury bug has bitten another key offensive player on the Illinois football team.

Running back Josh Ferguson is very likely to miss Saturday’s game against Iowa after injuring his right shoulder against Nebraska. With just over four minutes left in the first quarter, he took a handoff from quarterback Wes Lunt and ran to his left for a couple yards before Cornhuskers’ linebacker Chris Weber hit his helmet on Ferguson’s right shoulder.

The senior running back stayed on the ground for a moment before getting up and trotting to the Illini sideline, holding his shoulder. Illinois’ trainers looked at it and decided to take Ferguson to the locker room for examination. He was ruled out for the remainder of the game and returned to the sideline without his jersey in the second half.

Head coach Bill Cubit said Ferguson went to the doctor’s office Monday afternoon to check the extent of the injury and that he was very doubtful that the senior would play.

“He’s very disappointed,” Cubit said. “He knows he’s an integral part of this offense. He’s going to miss being out there to help the football team.”

Cubit and his staff had to scrap a majority of the offensive plays they planned on using because of the Ferguson’s injury — the original plan was to use a two-running back formation. The offensive set had been used successfully on the drive before Ferguson’s injury when the senior ripped off a 48-yard run and freshman Ke’Shawn Vaughn followed the next drive with a nine-yard run.

Vaughn didn’t seem to feel the added pressure. The freshman ran for 80 yards against Middle Tennessee State and didn’t disappoint against Nebraska. Vaughn ran for 98 yards, 48 of which came on a run at the end of the first half. His rushing total was the most by a freshman running back since Donnovon Young ran for 100 in 2011.

The outlook of Ferguson looks positive, but in the meantime, the players and coaching staff have confidence in their four-star recruit from Tennessee.

“We have complete confidence in him,” Lunt said. “He’s gotten a ton of reps … it’ll be a fun experience for him in a difficult environment but he’ll be ready.”

There were a few moments when Cubit and the Big Ten referees didn’t get along during Saturday’s game, but one moment stuck out the most.

The confusion happened at the start of the second half. Lunt threw a pass to wide receiver Geronimo Allison, whose foot went out of bounds on Illinois’ 34-and-a-half yard line. Vaughn ran on the next play because Illinois was one yard short and got the ball to the 38-yard line for what should’ve been an Illinois first down.

The down markers displayed first down, but the chains were set at the 25- and 35-yard lines. Vaughn ran the next play for six yards to the 48, followed by a loss of four. On third down, Allison caught a pass just short of the 45.

The referees then looked at the replay and awarded Nebraska the ball on a turnover on downs because they believed the chains were correct and thought it was fourth down, but it was actually third. As a result, Nebraska received the ball.

The Collegiate Officiating Consortium released a press release Monday blaming a breakdown in officiating mechanics. The groups acknowledged the mistake and said Illinois would have had another down if the drive was correctly officiated.

Cubit was furious with the call because he likely would’ve punted on fourth down but acknowledged that mistakes happen during his weekly press conference.

“They have a hard job, especially with the speed of the game,” Cubit said on Monday. “I think the Big Ten officiating is outstanding … We all make mistakes.”

Cubit didn’t give up on Malik Turner against Nebraska.

The sophomore wide receiver dropped a few key passes earlier in the game, but that didn’t deter Cubit from choosing him for the game’s biggest pass. Lunt threw a 50-yard pass to Turner in the final minute of the game and helped set up the game-winning touchdown to Allison.

“’Malik, you got one shot at this big guy, you have to make the play’ and he did,” Cubit said. “He wasn’t playing really well but he got it when it counted.”