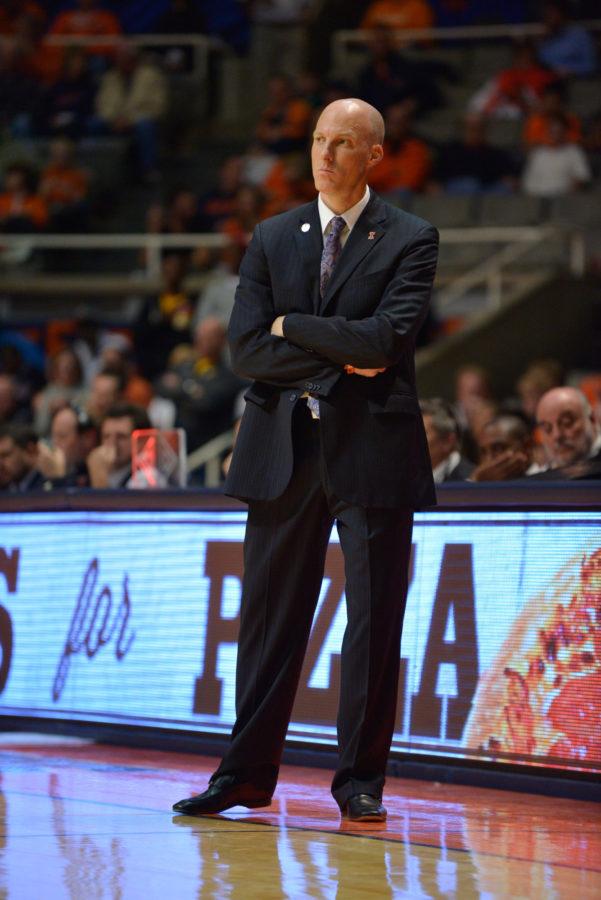 For the first time since classes started, a weekend devoid of any basketball recruiting visits came and went on the Illinois campus.

Sometimes recruits take official visits, other times they’re unofficial. We’ve seen them scheduled far in advance, and others have materialized at what seems like the last moment. But all was quiet on the basketball front this weekend as the football team knocked off Nebraska in thrilling fashion. The Illini hoopers cheered from a few hundred feet away at the Ubben practice facility, watching on TV following their second practice of the day.

It’s been widely speculated that Illinois could be in a favorable position to land a deep and talented 2017 class, but it’ll seem like an eternity in recruiting time before those dominoes start to fall. With the November signing day for the 2016 class still over a month away, one would think that the collective focus would still be leaning heavily on targets in this upcoming class.

Illini head coach John Groce got a commitment from 2016 Milwaukee point guard Te’Jon Lucas in early September, and fans celebrated. But after the congratulatory noise following the Lucas decision has died down, it seems like Illinois hoops recruiting has settled back into a lull.

Groce and his staff hosted the entire La Lumiere prep school team for unofficial visits two weekends ago, hoping to build their relationship with La Lu’s center James Banks. Banks is a very solid player, ranked in the top 60 in the class of 2016 by 247sports.com. However, he also holds offers from a wide variety of other schools, and there isn’t much reason to believe he favors Illinois over any of them.

If you look back at other 2016 visitors from the fall, this particular class seems increasingly shallow. Xavier Sneed committed to Kansas State, and Xavier Simpson chose Michigan. Over the summer, it felt like Illinois could be the favorite to land Chicago guards Charlie Moore and Zach Norvell, but the overall lack of meaningful noise out of either camp makes me think that mutual interest between the parties is low.

It’s starting to feel like Groce is Will Smith’s character in the movie ‘I Am Legend,’ wandering empty streets where recruits usually roam and waiting to hear something besides his own echo. I know there’s still plenty of time to land another player or two in the 2016 class, but where is everybody?

I really don’t think Groce will allow his 2016 class to start and end with Lucas. He still has two scholarships to work with in 2016, and landing a big man would make the most sense. If Banks doesn’t bite, another fifth-year transfer could take a scholarship, with the final open ride going toward Tracy Abrams’ sixth year.

Some new 2016 names might surface as well, even into the spring. As we’ve seen, recruits can pop up a coach’s radar as suddenly as a thunderstorm in July.

Maybe we’re unequipped to handle such radio silence after becoming accustomed to the wild swings of Groce’s recruiting adventures the last three years. Maybe after all of the disappointing news (not just recruiting, but injury and discipline-related as well) we’ve been exposed to over the last few years, a reprieve isn’t the worst thing.

But don’t let the silence fool you. Groce is still hard at work.

Alex is a senior in AHS?.