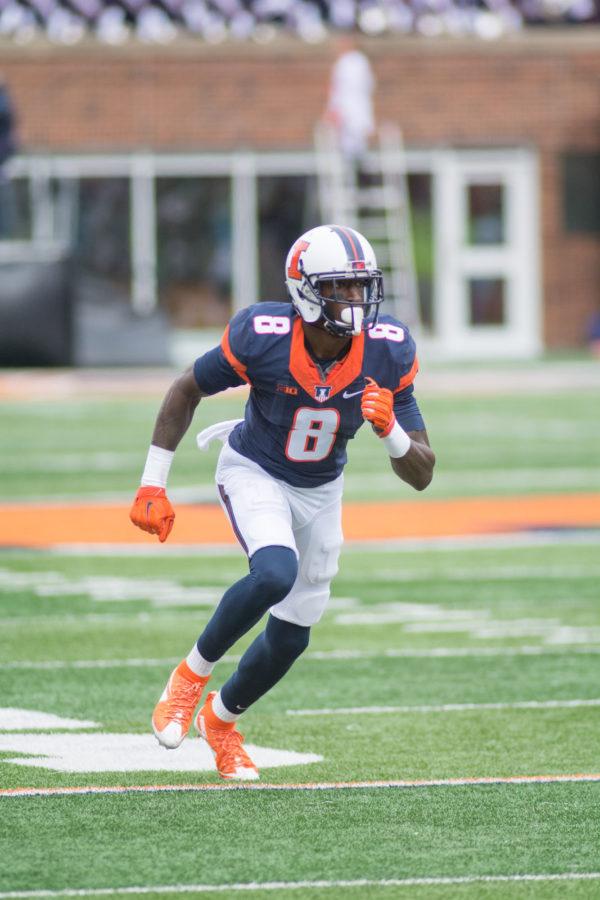 Wide receiver Geronimo Allison thought he had the game-winning touchdown the first go around Saturday against Nebraska — he told quarterback Wes Lunt just that while officials were reviewing the play. But Lunt told him to wait. When the call came back, Allison had to focus on the next play and the Illini’s next chance to win.

“I didn’t get down,” Allison said. “I knew I could win this route on this guy. Wes was trusting and kept saying ‘we’re going to get this.’”

And Allison got one, with just 10 seconds left on the clock.

He dove and grabbed the pass low in the end zone, sat up on his knees and spread his arms wide. With the ball still grasped in his right hand, he raised his face to the darkening sky as his teammates surrounded him in his celebratory touchdown glory.

There was no question the throw was heading to Allison: five of the six pass attempts in the red zone were thrown in his direction

In his second year at Illinois amid a slew of offensive injuries, Allison has become Illinois’ go-to receiver. And with a team that has 30 dropped passes on the season, Allison is a trusted presence on the field.

“There’ a lot of pressure on G-mo and Wes to play well,” head coach Bill Cubit said. “But I like that they are embracing the role to play well.”

In the Nebraska game, Allison had eight catches for 91 yards and broke the 1,000 career receiving yard mark (1,051). He leads the Big Ten in both receptions (32) and receiving yards (453), ranking in the top 20 nationally in both categories and has been added to the Biletnikoff Award Watch List.

He received plenty of support going into the game. One of his old junior college coaches, who is from Nebraska, texted Allison before the game, telling him he was on Allison’s side and not rooting for his home state’s Cornhuskers.

After the game, that coach posted a picture of Allison to Facebook pointing out his game winning play as exactly the reason for his allegiance.

“He knows he’s the guy,” Lunt said. “It’s like the way I’m playing too — just knowing you’re the starter and the guy everyone is counting on, that’s huge.”

Allison said the toughest part of adjusting to Big Ten play from junior college is trusting in himself and learning the appropriate routes from reading coverages.

His change hasn’t happened overnight — he’s taken a year to develop his leadership skills. While he may not be vocal in the locker room, he is more accustomed to the environment, even if he didn’t expect to be a senior captain at Illinois.

“Never in a million years would I have thought to been in this type of atmosphere to make these type of plays,” Allison said.