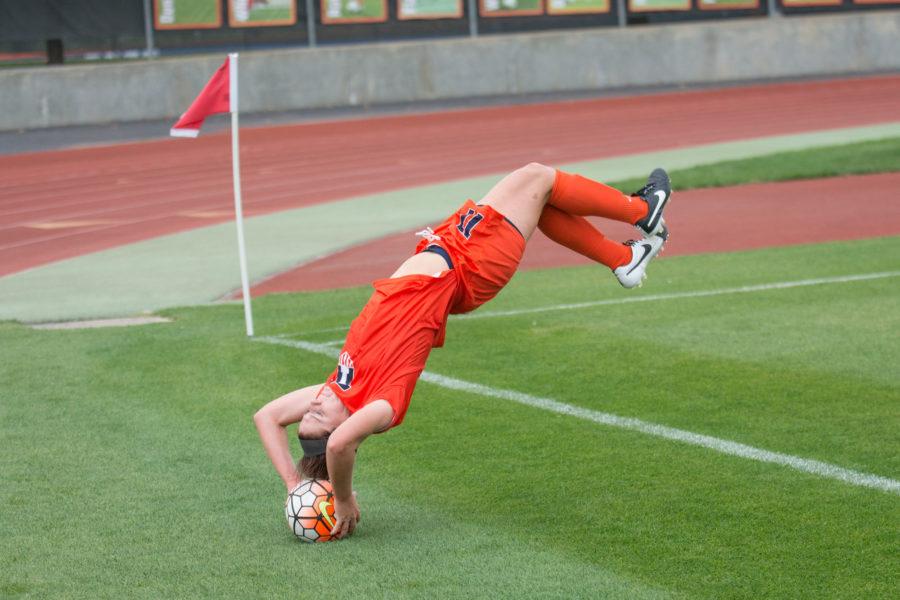 Nicole Breece performs a flip throw during Illinois’ 2-1 overtime victory against Maryland at Illinois Soccer and Track Stadium on Thursday.

With the Big Ten race as tight as it is, Rayfield knows that each win is essential.

She pointed out that the competitiveness of the Big Ten means that the pressure is on her team every day to perform at its best.

“That’s what you play in the Big Ten for,” Rayfield said. “You want that pressure, you want to have to be at your best, you want to try to challenge yourself, and that’s why these athletes came to a Big Ten school.”

The Illini sit in sixth place in the Big Ten standings, while the Wolverines are in fourth and the Spartans are in seventh.

The weekend could go either way for the team and with that in mind, Rayfield is not changing her team’s game-plan.

She continues to emphasize possessing the ball as a means for creating opportunities.Those opportunities are likely to come infrequently against a stingy Spartan defense.

senior midfielder/forward Nicole Breece acknowledged that the Illini need to get creative.

“With Michigan State having a good defense, it’s going to be a challenge, but we like challenges,” Breece said. “We’re just going to stick to our strengths, which are attacking flanks and getting opportunities, getting in line, and really just trying to pick them apart the best way we can.”

Breece noted that her teammates are excited to go on the road and have the opportunity to knock off some Big Ten opponents.

Like Rayfield, Breece recognizes the importance of these upcoming games.

“Everybody in the Big Ten is good this year, and it’s a race for whoever is going to get the top spot,” Breece said. “It’s wide-open, actually. “

Rayfield is expecting two really tough games but said she thinks that her team is in store for two very different matchups.

She noted that the weekend holds a challenge for both the Illini’s offense and defense.

“Michigan State is really going to make it really hard to score goals, and look to rely on a couple of individuals to create some things, and I think Michigan may be exactly the opposite,” Rayfield said. “(Michigan is) really going to come after you with lots of numbers, and really make it hard to keep them off of the scoreboard.”