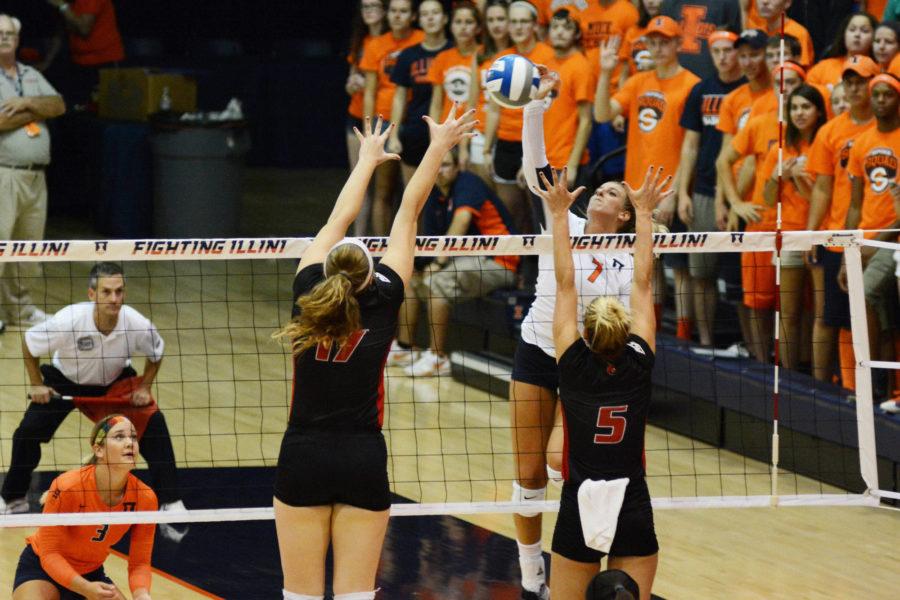 Illinois’ Jocelynn Birks (7) spikes the ball during the game versus Louisville at Huff Hall on Friday, August 28, 2015.The Illini won 3-0.

The No. 13 Illinois volleyball team will be “fired up” to play at Huff Hall for the first time since August, according to head coach Kevin Hambly.

Illinois is coming off their first Big Ten losses of the season, falling to then-No. 19 Wisconsin and then-No. 16 Minnesota over the weekend. They’ll look to bounce back against the Nittany Lions, a team whose sole loss came against No. 4 Nebraska on Oct. 2.

“They have all the pieces to be a championship team,” he said. “That’s what they’ve had for the past eight years.”

Hambly said the Nittany Lions’ secret weapons are their liberos. He explained that their defensive specialists go under the radar because they make things look easy on the court.

“Washington’s a different animal, and she’s maybe frontrunner for player of the year,” Hambly said. “And Megan Courtney is on a mission … she’s freakishly athletic.”

To knock off the No. 3 team in the nation, Illinois outside hitter Jocelynn Birks must continue her stellar play since returning from the back injury that sidelined her against Maryland and Rutgers two weekends ago. After sitting out against the Terps and Scarlet Knights, Birks posted a combined 42 kills and 21 digs versus the Badgers and Golden Gophers.

Friday’s match against Penn State is IlliNOISE night — the Illini crowd will try to break the 105-decibel Huff sound record it set in last year’s match. Birks said she enjoys the raucous atmosphere, but she also said she thinks the team is going to be a little bit too anxious at the opening serve.

“It’s going to take a lot of calming down. We’re going to be frantic and nervous at the start of the match,” Birks said. “It’s human nature (when there are) a lot of people, so I think we’re going to have to focus on using all the people to our advantage and find our arousal level.”

“I think they’ll be super fired up to get back and play at home, and there’s a different level of emotions you have to manage,” Hambly said. “I expect us at first to come out and be overcharged a little bit, and then we’ll settle in.”

“(To win), it’s going to take noticing the moment and fighting to execute in the moment,” Birks said.