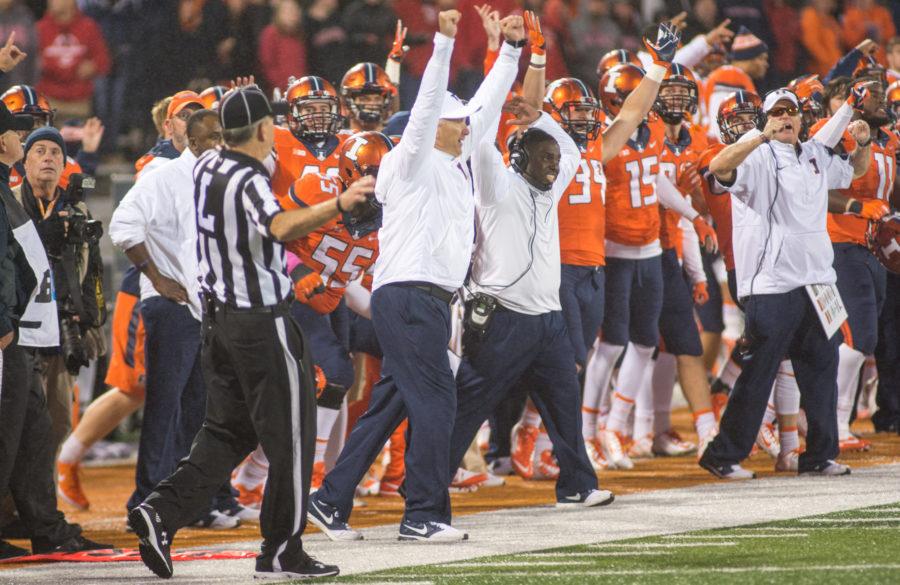 Head coach Bill Cubit and the Illinois sideline celebrate after Taylor Zalewski makes the PAT that put Illinois up 14-13 over Nebraska to win the game.

The Franczek Radelet investigation of the Illinois football team is over. And everyone but Tim Beckman has been cleared.

WHAT DID THE REPORT SAY

The investigation was prompted in part by Twitter allegations made by former Illini Simon Cvijanovic in May. In the following days, former Beckman players from Illinois and Toledo also spoke out about their treatment at the hands of the former head coach.

Illinois is off to a 4-2 start under Cubit, the program’s best start since going 6-0 through six games under Ron Zook in 2011.

Beckman has said he’s considering legal action against the University in relation to his firing, but has not yet filed suit.

Franczek Radelet’s investigation comes two months after the results of the Pugh, Jones and Johnson women’s basketball investigation showed no evidence of player abuse or racism on the part of head coach Matt Bollant.

Radelet’s investigation included review of NUMBER OF STUFF ABOUT HOW LONG IT TOOK and lasted almost five months. Radelet is also responsible for reviewing claims of sports medicine mistreatment made on the part of Illinois women’s basketball players.

Cubit and his team have a week off before Wisconsin comes to town for Homecoming on Oct. 24. The Badgers and the Illini have identical 4-2 records and are both 1-1 in conference play.