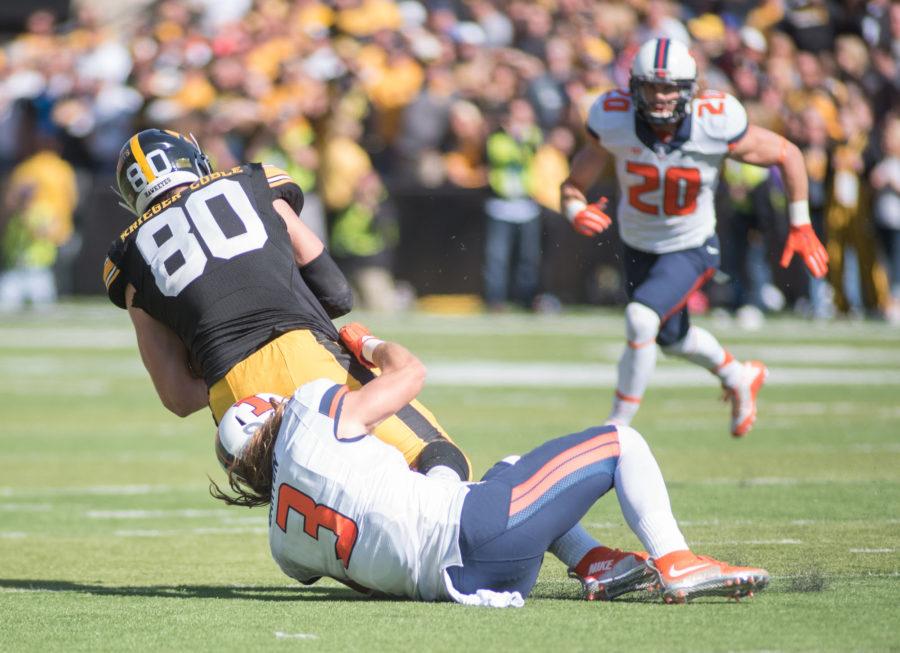 IOWA CITY, IOWA — With three minutes left in the third quarter, Iowa was starting a drive on the Hawkeyes’ 25-yard line. It was good field position for an Illini defense that had made two big goal line stops earlier in the game.

But that didn’t matter when Iowa’s Jordan Canzeri rushed up the middle, cut right and broke free. No Illini could catch him and Canzeri sailed into the end zone for a 75-yard touchdown run.

This standout run from Canzeri highlighted the secondary’s struggle to stop key plays in Illinois’ 29-20 loss to the hosts.

“We didn’t fit it right, that’s just the bottom line,” co-defensive coordinator Tim Banks said. “You misfit it, we overrun the ball and things are out of the gate. It was a little bit more slow in that we didn’t give up the big one early, but we ended up giving one late to a good player and you just can’t do that.”

Canzeri was the spark plug for the Iowa offense, racking up 270 total yards, including 256 on the ground. In addition to his 75-yard run, he caught a touchdown pass.

His touchdown run is the longest by a Hawkeye since 2008. Canzeri recorded career highs in yards rushed and attempts.

With Canzeri as the main face of the run game, the Hawkeyes rushed 51 times for 278 yards, compared to the Illini’s 46 yards on the ground.

The secondary gave up Canzeri’s long run, but also gave up to long passes to Hawkeyes’ receiver Jerminic Smith that combined for 95 yards. One — a 49-yard strike — helped set up a touchdown in the second quarter.

But the Illinois defensive line was able to put pressure on the Hawkeyes’ offense and quarterback C.J. Beathard.

“Iowa is always a vaunted o-line,” offensive lineman Ted Karras said. “I thought we were going to knock Beathard out for the game for a little bit. We are more trench heavy this year than we have been in the past and I think that’s translating to these games coming down to what they are.”

T.J. Neal and Jihad Ward combined for 25 tackles, and Dawuane Smoot had one sack. Illinois had seven TFLs.

But while the line played strongly for three quarters, it was clear it couldn’t keep up with Canzeri in the fourth quarter: He rushed play after play for the Hawkeyes. Iowa had possession for 10 minutes more than Illinois.

Iowa scored first off a 21-yard pass to receiver George Kittle. Clayton Fejedelem took responsibility for that score, adding that it was just a few miskeys that put the win out of the Illini’s reach.

“The first touchdown, that was me,” Fejedelem said. “My key was wrong, I just wasn’t taking care of what I needed to do, so that’s on me. But as a whole, we did pretty well.”

But for the Illini secondary, the big focus was on the 75-yard run by Canzeri. Although the offense had opportunities to score, Fejedelem said that particular play was a big mistake.

“If they didn’t have that 75-yarder,” Fejedelem said. “That might have been a different game.”