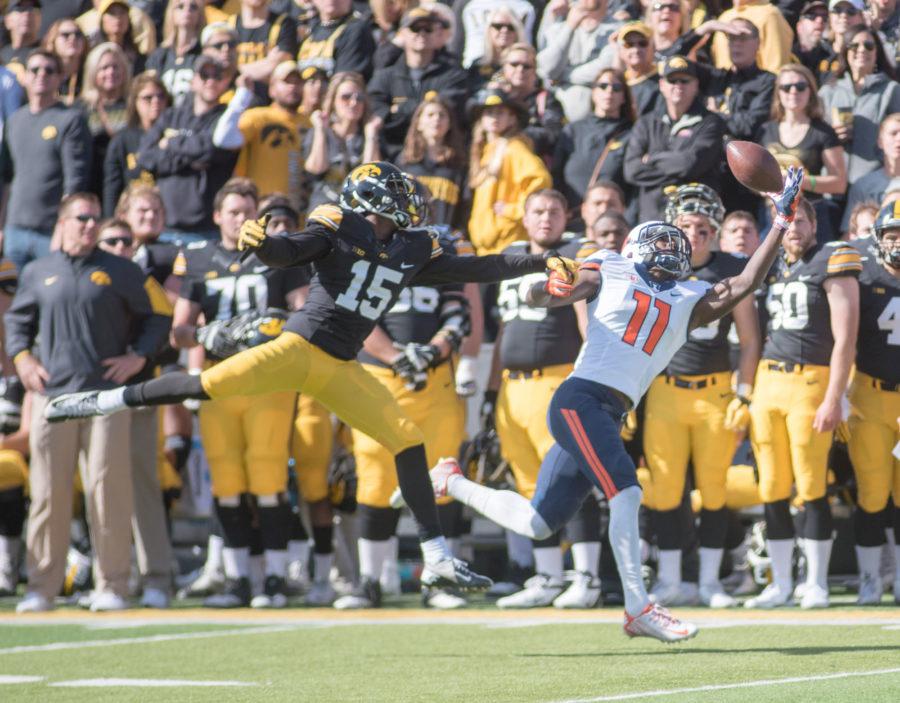 IOWA CITY, IOWA — The Illinois football team made things interesting at Kinnick Stadium in Iowa City, Iowa, on Saturday but couldn’t keep up with Iowa because of costly mistakes in the team’s 29-20 loss.

The Illini allowed the Hawkeyes to extend drives on big plays and the Illinois offense failed to gain any momentum for much of the first half.

A pair of big hits shook up two of Illinois’ key offensive contributors — running back Ke’Shawn Vaughn was temporarily knocked out of the game in the fourth quarter and on the Illini’s final drive, receiver Geronimo Allison got leveled trying to catch a third-down pass from Wes Lunt. Vaughn returned to the game and fumbled, while Allison did not return.

Despite the adversity and the lost opportunities, head coach Bill Cubit was proud of the way his players battled through various obstacles.

“Our kids fought,” Cubit said. “We can win a lot of football games with that desire and heart, to go out there do that stuff there.”

Illinois’ defense looked strong for a majority of the game but big plays and costly penalties allowed Iowa’s offense to hold on to the ball for long stretches. Iowa finished with 478 total yards — 200 passing and 278 rushing — and held the ball for 10 minutes longer than Illinois.

The Illini defensive line was aggressive from the start of the game pressured Iowa quarterback C.J. Beathard all day. Jihad Ward finished with the team lead in tackles and Dawaune Smoot finished with Illinois’ only sack.

Although the defensive line created pressure, the secondary had a difficult time keeping up with Iowa’s wide receivers on long plays. The Hawkeyes recorded a 46-yard pass on 3rd and 27 and completed a 49-yard pass when on 3rd and 13. Hawkeyes running back Jordan Canzeri scored on a 75-yard touchdown on a run in the third quarter right after Illinois cut Iowa’s lead to 16-13.

Iowa also continued drives because of 15-yard personal foul penalties on Chunky Clements and Carroll Phillips in the first quarter.

But despite the errors, its defense kept Illinois in the game, stopping Iowa in the red zone on three drives. The line has progressed in the last two weeks and Cubit was proud in how the group affects the team on and off the field.

“I thought they played really well,” said Cubit of the defensive line. “They’re doing a nice job. When you want to win a lot of games, you take that same attitude they have, with what they’re doing and the culture that they’re changing.”

Lunt and the offense failed to gain any momentum on the opening drive but moved the ball better on its second. Lunt threw a 34-yard pass to sophomore wide receiver Malik Turner and followed that play with a 27-yard pass to Allison. The drive ended with a four-yard Vaughn rushing touchdown.

Lunt and offense remained silent for the rest of the first half and finished with 121 total yards to Iowa’s 299 but gained momentum at the start of the second half. Head coach Bill Cubit increased the offense’s tempo and Illinois drove to the red zone twice but settled for two field goals. Both scoring drives were hampered with sacks and penalties that took the offense out of rhythm.

The Illini made it a three-point game with 10 minutes left after Lunt threw a 53-yard touchdown pass to Allison, but that was as close as the Illini would make it. Iowa kicker Marshall Koehn sandwiched a pair of fourth-quarter field goals around a Vaughn fumble, and the Illini couldn’t respond.

Illinois will have a bye week before it hosts Wisconsin for Homecoming on October 24. The Illini are 4-2 overall and 1-1 in Big Ten play. Although the team has improved in comparison to last seasons, the players don’t believe in moral victories like they did in the past.

“I think that the frustration is we’re so close and I think everyone can see that from us breaking through as a team,” Lunt said. “We’ll get back to work during this bye week. We have a lot of guys injured so it’s a perfect time for the bye week and we’ll move on to Wisconsin.”ALL FACTS CHECKED JT