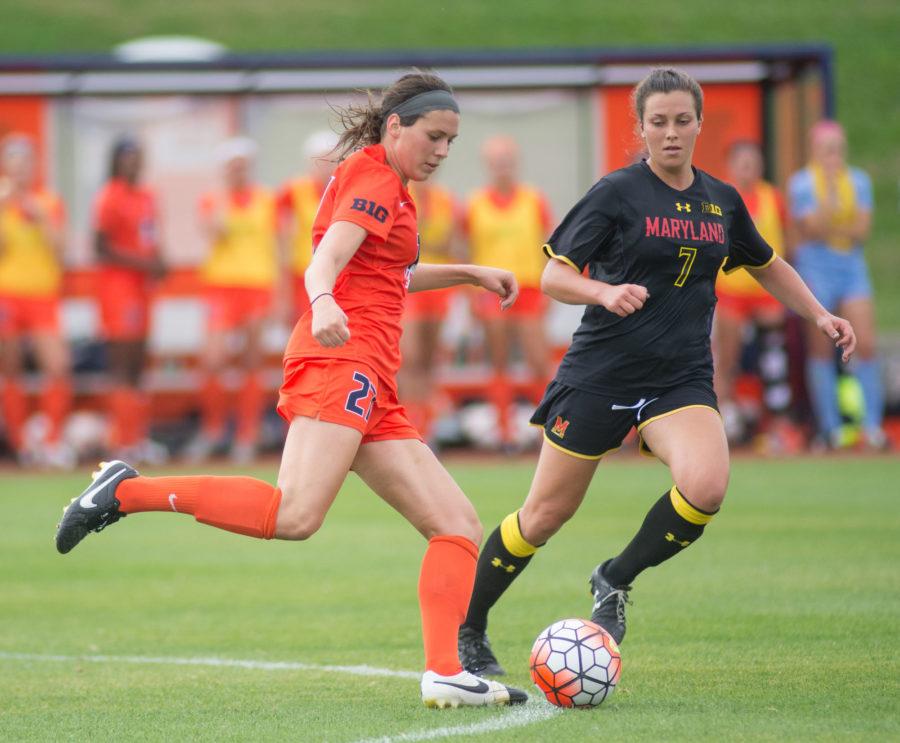 Taylore Peterson makes a pass during the game against Maryland at Illinois Soccer and Track Stadium on Thursday. Illinois won 2-1 in double overtime.

October continues to be a winless month for the Illinois soccer team.RB

The Illini (8-3-3) RBhave yet to secure a win in October after tying with the Spartans 1-1 on Friday RBand losing 1-3 to the Wolverines on Sunday.RB

Illiniois forward Jannelle Flaws ended her scoring cold spell when she netted a penalty kick with seconds remaining in the match at Michigan State on Friday to send the game into overtime. RBFlaws went scoreless for over a month, stemming back to Illinois’ win over Portland on Sept. 6.RB

The Spartans and the Illini were in a constant stalemate throughout the overtime halves, neither team found the back of the net.RB

Friday’s game was Illinois’ third straight tie in overtime. RBHead coach Janet Rayfield said she believes her team hasn’t been able to finish in overtime games because of a lack of emphasis in playing as a unit.

Illinois attempted only two shots in the 20 minutes of overtime.RB

Scoring woes continued for Illinois on Sunday against the No. 3 ranked team in the Big Ten.RB

While the final score was 3-1, Michigan scored all of the game’s four goals. In the 18th minute, Illinois midfielder Nicole Breece’s throw-in landed in Michigan’s penalty box. A Michigan player attempted to clear the ball, but the ball inadvertently bounced off another Michigan player and into the goal.RB

Illinois did not possess the ball for most the game and Rayfield said she thinks it was because her team was too focused on preventing Michigan’s strengths.

“We didn’t put the ball on the floor, play to our feet (or) move the ball quickly, so we allowed them to really put us under pressure and keep us locked in on our end,” Rayfield said. “We just never really got a hold of the game in order to get the ball out of our end so we were defending a lot, and I think that wears you down.”

In an attempt to defeat Michigan, Illinois played with more physicality, despite being more of a technical team. Flaws noticed this and believed it may have caused Illinois’ struggles against Michigan.

“We have to play our soccer regardless of who our opponent is and we can’t let certain circumstances change that,” Flaws said. “We just need to be the best version of ourselves we can be, and then the wins and goals will start coming.”