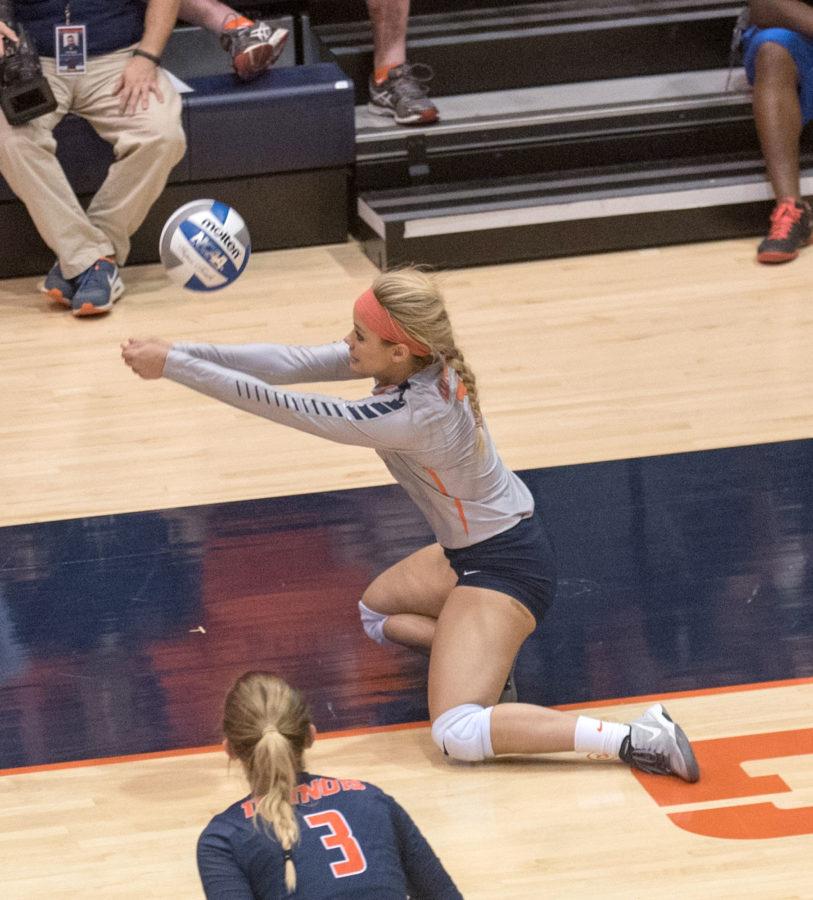 Illinois volleyball head coach Kevin Hambly was confident his team would rebound from back-to-back losses to Wisconsin and Minnesota over the final weekend of September. He felt the return to Huff Hall after over a month on the road would re-energize the Illini.

Though the Illini were overmatched, Hambly thought they showed heart and grit in the final two sets.

Illinois had won 12 of its last 15 matchups with Ohio State prior to Saturday, when Hambly’s team dropped another match in four sets. Compared to the fight they showed against the Nittany Lions the previous night, the Illini played less inspired against the Buckeyes.

“We had a lot less heart and will (against Ohio State). That was really the big thing that we were lacking, and that shows up in our play,” Jocelynn Birks said. “(The losing streak) is affecting us … Being at home, we wanted to gain some confidence back and get the win. (Friday against Penn State), we were able to figure some things out. It’s just about learning how to get that back again and maintain.”

Illini look to get defense back on track

Hambly has stressed the importance of team defense throughout the first half of the season. As of late, his team has struggled to stop opposing Big Ten offenses

“Our team is priding itself on being great defensively,” Hambly said. “I have always said and I believe it: you reveal your soul in your defense. I say that in football and basketball. It’s definitely that way in volleyball. We’ve lost that, and we have to get that back.”

In an attempt to do just that, Hambly shook up his starting lineup prior to Saturday’s tilt with the Buckeyes. After a solid match against Penn State, defensive specialist Julia Conard got the nod against Ohio State in place of Danielle Davis. Conard finished with 16 digs against the Buckeyes.

The Illini have lost four straight matches to Top-15 opponents, but their schedule gets easier in the coming weeks.

“It was a tough stretch. We will get some more home matches, and play some teams that aren’t ranked in the top 15, then we can ride it out a little bit,” Hambly said. “I still believe that we have the talent and ability to be a top 15 team, but we’re not playing like one right now.”

Northwestern (11-6) stunned Penn State on Saturday in five sets in front of a frenzied Welsh-Ryan arena crowd in Evanston. It was the Wildcats’ first victory over the Nittany Lions since Nov. 23, 2002.

Sophomore setter Taylor Tashima tallied a match-high 52 assists in the win. She also finished with 10 digs.

Penn State’s other loss came against Nebraska at home on Oct. 2. The Nittany Lions are ranked No. 5 in the country, but they seem to have lost a step in the always-competitive Big Ten.