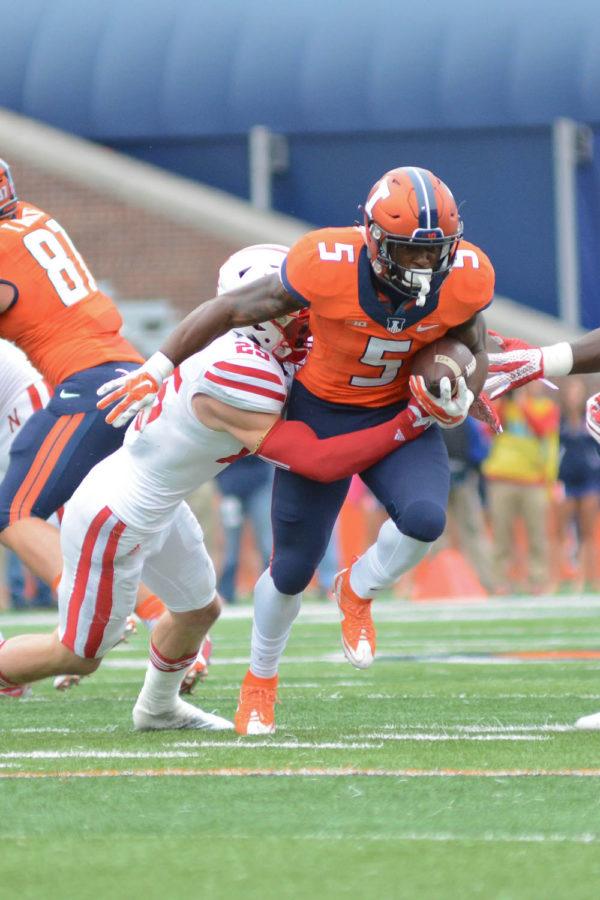 Illinois' Ke'Shawn Vaughn (5) runs with the ball during the game against Nebraska at Memorial Stadium on Saturday, Oct 3, 2015. The Illini won 14-13.

Illinois’ pass offense is ranked No. 1 in the Big Ten — Wes Lunt is 136-for-232 for 1,424 yards, nine touchdowns and two interceptions after missing significant time last season due to injuries. Lunt ranks third in the Big Ten in passing average per game. Backup quarterback Chayce Crouch has played in all six games, but hasn’t attempted a pass since the Illini’s 48-14 loss to North Carolina. The Illini have used Crouch almost exclusively in a third-down package.

The receiving game has been the Geronimo Allison show. Allison leads the Big Ten in receptions (40) and receiving yards (601). He has made NFL-style catches that have continuously kept the Illini in games, and caught the game-winning touchdown against Nebraska in Week Five. But the other receivers have been largely stagnant and dropped passes have proven problematic. With Mike Dudek and Justin Hardee sidelined with injuries, Marchie Murdock, Desmond Cain and Malik Turner have combined for 525 yards.

Illinois’ rush offense ranks last in the Big Ten. Relying largely on Josh Ferguson (381 yards, 3 touchdowns) before his shoulder injury in Week Five, the Illini have turned to freshman Ke’Shawn Vaughn. Vaughn now leads the Illini with 392 yards and three touchdowns. The run game has been hit hard by injury: Reggie Corbin and Dre Brown are out for the season.

The tight ends have made small contributions to the Illini offense stat-wise. Tyler White was concussed in the Western Illinois game and missed the North Carolina game. He has 46 receiving yards and two touchdowns. Nate Echard has no receiving yards on just one catch and Andrew Davis has 16 yards on three grabs.

The line has done a good job protecting Lunt, which is key this season after he missed games due to various injuries last year. The group has allowed eight sacks for a total loss of 73 yards. After last season’s revolving door of lineman, Cubit has been able to start the same five players every week.

The Illini defensive line took a few games to become acclimated but the group has impressed, especially in its first two Big Ten games. Defensive end Jihad Ward is fourth on the team with 33 total tackles and two tackles for loss — he was expected to miss the first two games because of a knee injury he suffered in training camp but has played in all six. Dawuane Smoot leads the team with 11.5 tackles for loss and five sacks while Chunky Clements has seven TFLs. Injuries to Jamal Milan and Teko Powell have hurt the unit’s depth.

The linebackers’ jobs have become easier with a stronger defensive line. Opponent’s running backs are making their was through the line less often and the Illini linebackers are facing fewer double teams. T.J. Neal is second on the team with 53 tackles and third with five tackles for losses. Mason Monheim is third on the team with 46 tackles and has one interception this season.

Both V’Angelo Bentley and Eaton Spence have improved at cornerback. The secondary has given up fewer big-plays this season and corners have kept up with opponents’ wide receivers for the most part. Illinois’ pass defense ranks seventh in the Big Ten, allowing 1,087 yards and eight touchdowns through the air. Eaton Spence has 17 total tackles and two interceptions while Bentley has 20 total tackles.

Although the defensive line is stronger this season and has limited big runs, Clayton Fejedelem leads the team with 55 total tackles. The run-stuffing senior often makes plays on running backs and short passes to wide receivers. Illinois’ pass defense efficiency ranks sixth in the Big Ten and opponents’ quarterbacks are completing 53.1 percent of their passes. Taylor Barton leads the team with three interceptions — all in the first two games of the season.

Illinois’ offense has struggled recently after starting the season on a hot streak. The offense put up 96 points in the first two games, but haven’t scored more than 27 points in the last four games. The offense has looked out of sync — receivers have dropped passes and  there’s been several instances of miscommunication between Bill Cubit, Wes Lunt and the receiving corps. The Illini haven’t had much success finishing drives and have the worst red zone offense in the Big Ten.

Illinois’ defense has made drastic improvements from last season. New co-defensive coordinator Mike Phair has improved the defensive line in his first season and the rest of the scheme looks the same with some tweaks to last season’s system. The Illini’s total defense ranks eighth in the Big Ten after spending the last few seasons near the bottom of the conference. The defense leads the league with 1,539 yards allowed and the rush defense is 10th in the league.

Illinois’ special teams has improved from 2014 but still shows flashes of inconsistency. Kicker Taylor Zalewski has made and missed important kicks in six games this season. Punter Ryan Frain hasn’t been bad but the Illini clearly miss former All-Big Ten punter Justin Duvernois. V’Angelo Bentley has struggled with returns this season but since Caleb Day returned from suspension, the two-man return game has improved

Ryan Frain has a tough job replacing Justin Duvernois. Illinois has the shortest net yards per punt in the Big Ten with 31.7 yards. Frain and kicker David Reisner have punted 38 times for 1,499 yards and three touchbacks. Frain has punted inside the 20-yard line four times and kicked a 50-yard punt once.

Zalewski has attempted all 13 of the team’s field goals this season and made eight, which ranks 11th in the conference. His season-long includes a 51-yard attempt but he’s also missed key kicks, especially in the North Carolina game. Zalewski has made all 21 of his PATs.

Illinois’ kickoff coverage ranks ninth in the Big Ten and has a 39.8 net average. The Illini kickers have kicked 19 touchbacks on 35 kicks.

The return group has struggled this season after two years of highly successful work. Illinois ranks sixth in the Big Ten on kickoff returns averaging 23.5 yards per return. V’Angelo Bentley has struggled returning this season and hasn’t returned a kick for a touchdown. The group has improved with the two-man return scheme of Bentley and Caleb Day. Bentley averages 24.56 yards per return with a 37 long return on nine returns and Day averages 20.33 yards on three returns.