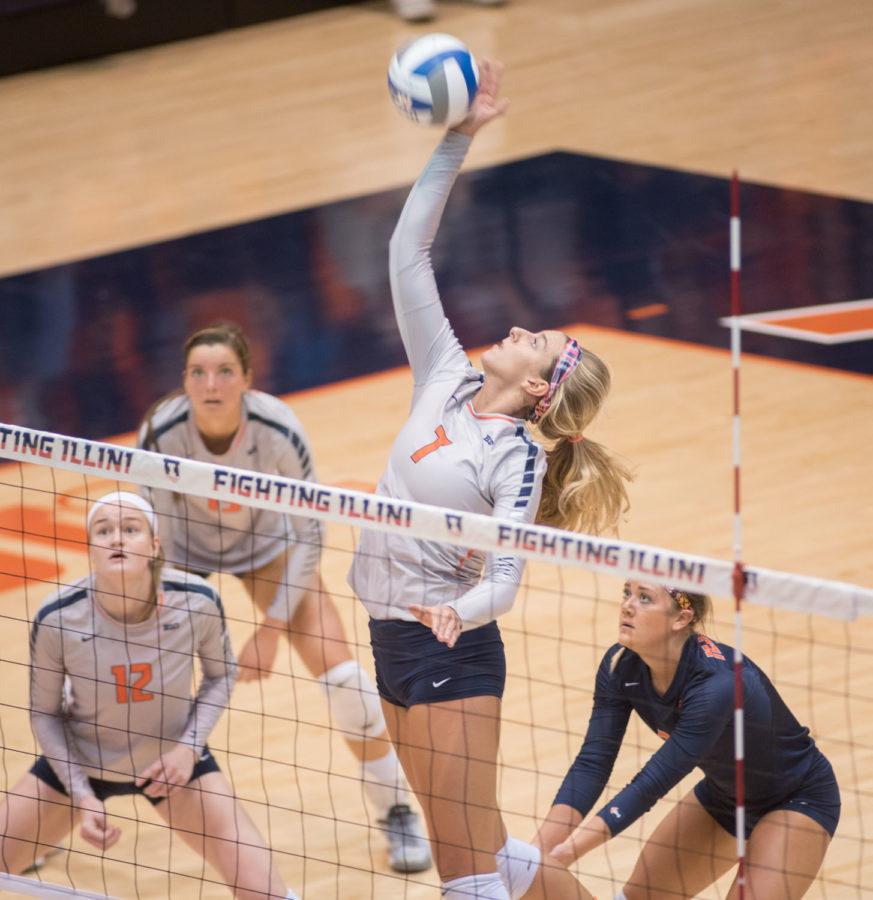 Jocelynn Birks spikes the ball during the game against Penn State at Huff Hall on Friday, October 9. Illinois lost 1-3.

The video consisted of 75 moments throughout the weekend that Humbly thought his team should have scored points on. His message was that he wanted greater emotional investment from everybody.

“The margins are too thin to miss that many opportunities,” Hambly said. “The reason I showed them that was not to beat them down, but to be like, ‘Hey, look, if we take care of some of this, every single set is going to be different.’ We’ve got to work on trying to fix that stuff.”

The Illini are in the midst of a four-game losing streak, the team’s first since 2013. That year Illinois had one of the toughest schedules in the nation and lost six of seven matches at one point. That team, however, bounced back by the end of the year and made it to the Sweet 16.

Facing a similarly tough schedule this year, there is still plenty of time for the Illini to regain the form it displayed early in the season. The team’s recent struggles have all come against ranked teams.

“Everyone’s going to lose those types of matches; it’s going to happen,” Birks said after Saturday’s loss to Ohio State. “Being at home, we wanted to gain some confidence back and get the win, we were able to figure some things out. It’s just learning how to get that back again and maintain that.”

Hambly said that kind of commitment occurs over time and it is hard for freshman starters Ali Bastianelli and Jordyn Poulter to show that right away. Poulter said Birks has been setting a great example for the entire team.

“It being her senior year, it’s her last chance to do something with her time here,” Poulter said. “I think for us her drive and her emotional investment is definitely something that we all need to try and match because I think you can see it in the matches how much she wants it.”

With another home series this weekend against Iowa and Nebraska, Hambly said he hopes to see a more proactive approach from his team. He would like the team to be more aggressive and set the tone of the match, instead of waiting to see what its opponent does first.

“It takes work to get your mind right to play; to get yourselves in the emotional state that you are ready to go out there and compete and claw and scratch,” Hambly said. “We are kind of waiting to see what happens in the matches as opposed to a ‘Let’s go bring it to people’ mentality.”