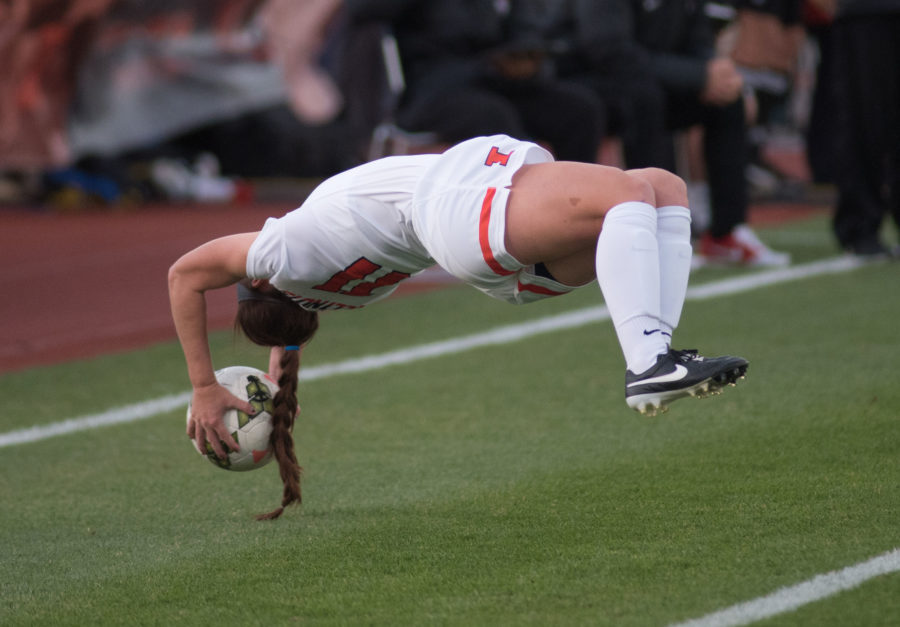 Nicole Breece performs a flip throw during the game against Ohio State at Illinois Soccer and Track Stadium on Friday. The game ended in a 1-1 tie.

With matches against Iowa on Thursday and Nebraska on Sunday, the Illini have a golden opportunity to make up ground in the Big Ten standings. Illinois currently sits at eighth place in the conference. As it stands, Illinois would be the final Big Ten team to make the conference tournament.

The Hawkeyes and Cornhuskers are lined up to be matches favoring of the Illini, with both Iowa and Nebraska sitting at the bottom of the Big Ten.

A couple of lighter opponents is just what this Illinois team needs.

Head coach Janet Rayfield and the Illini have not yet won in October and are coming off of a 3-1 loss against Michigan last weekend. Illinois’ two matches before the loss to the Wolverines resulted in a tie.

Good news does exist for the Illini as they head back to Champaign, though. The team remains undefeated at home to this point, with a 6-0-1 record.

With only four regular season matches — three at home — left for Illinois, team members know what is at stake.

“We just really want to make sure that we continue to solidify ourselves in terms of (being) one of those eight teams that make the (Big Ten) tournament,” Rayfield said. “And every game that we win gets us closer to feeling that that is a done deal. Certainly, the higher seed that you get, the better.”

Rayfield said she believes that her players have focused too much on the implications of winning, distracting them from performing at the level she feels her team is capable of. In her mind, if the Illini leave it all on the field and focus on the task at hand, success will follow in suit.

“I think if we’re our best, then all of the things we want — Big Ten tournament, postseason, all of those sorts of things — those will happen because we’re just being our best self,” Rayfield said.

Time of possession is the key to success according to the coach. She says that the numbers speak for themselves, and the team is successful when they control the ball more than the opposition.

Speaking of time, the seniors on this Illini team have some added motivation for winning as their collegiate careers wrap up.

“My home games are dwindling, so I’m trying to make the most of them and keep this undefeated streak at home,” senior midfielder/forward Nicole Breece said.

While Rayfield wants her team to focus on its play on the field and not worry about the standings, Breece made it clear that she and her teammates know the fate of their season remains in their hands.

“Eighth is the cutoff (to make the Big Ten tournament), so we’re just going to try to play our game,” Breece said. “We know what’s at stake, and that we need to step up our game, win some games and get these points.”