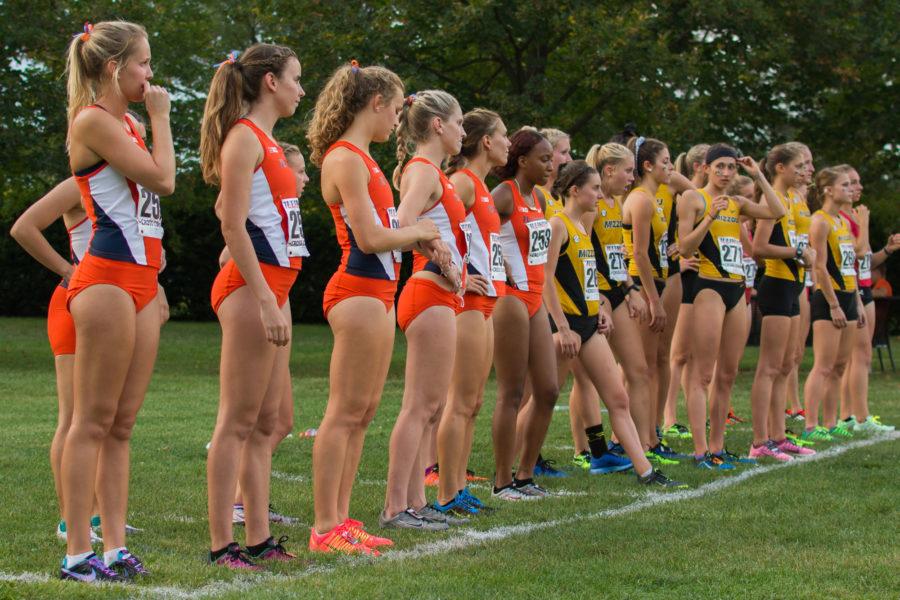 Illini's wating to start the race at the Illini Challenge 2015 at the Arboretum on September 4.

The Illinois women’s cross country team couldn’t be happier to be in the top-tier race for Saturday’s Pre-Nationals invite.ch

Coming off a ninth-place finish at the Roy Griak Invitational in Minneapolis, Minnesota, the Illini earned themselves a spot against some of the nation’s top women’s cross country teams such as Oregon, Georgetown, Michigan and Stanford.ch

Redshirt senior Alyssa Schneider wants to take advantage of racing against the high level of competition. She will try to continue the same approach that has brought her continuous success.

Part of Schneider’s strategy is to have as much gas in the tank as possible toward the end of the race in order to pass as many tired runners as she can.

This approach helped Schneider finish fourth overall at the Griak Invitational, where she completed the race in 21 minutes and 30 seconds.ch

Schneider is the only one on the team who has raced the Louisville course. She doesn’t remember how challenging the course is because she ran it three years ago, but is preparing for this race like she would any other.

The course will be home to the NCAA National Championship meet, where the Illini hope to be in late November. Schneider vaguely remembers it as a “true cross country course” with a variety of hilly and flat patches.

“We know this is the Nationals course, so our goal is to preview it in hopes that we run it again later,” Schneider said.

Petrey noted that the team has done an exceptional job of keeping focused in its practices, even with its large amount of time off. The team last raced on Sept. 26 and is ready to get back to action in a highly competitive race.

“When we found out we were in the seeded race, we weren’t jumping out of our seats, but it was definitely an achievement and a goal we had at the beginning of the season,” Petrey said.

Jones is proud his team qualified for the top-tier race. He is looking forward to seeing how his team can match up with the high level of competition at the meet.

“I think we are really prepared,” Jones said. “We want to be able to take advantage of the high competition level and not be something that diminishes our performances.”

Jones stressed that he would not mind seeing his team be more aggressive at the beginning of the race, but he does not want his athletes influenced by how other teams attack the course. He hopes that his runners will stick to the team goals and have an overall strong race.

The Illini did not compete in last year’s Pre-Nationals, competing in the Bradley Invitational instead where they finished first out of 30 teams.

“We are focusing on racing up to our full capabilities as a team,” Jones said. “And not letting ourselves get distracted by our surroundings.”