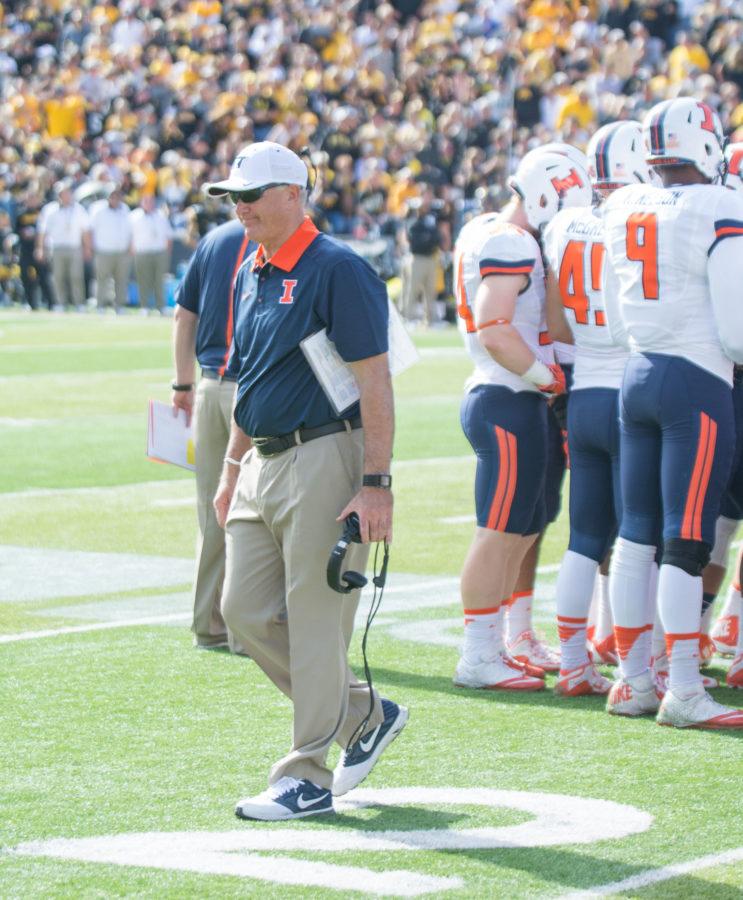 Head coach Bill Cubit walks away from the Illinois huddle during a timeout in the game agains Iowa at Kinnick Stadium in Iowa on Saturday, October 10. Illinois lost 20-29.

While campuses around the nation are filled with tailgates, full stadiums and college football, Illinois football’s Memorial Stadium will be empty Saturday.

Illini players will rest and watch other teams compete while Illinois is on its bye week. The break is exactly halfway through the season and has arrived at a convenient time for the Illini. Many players are nursing injuries and need the week off to heal and return to the field.

But as the players rest, their coaches will be hard at work. They’re planning for the Homecoming game against Wisconsin, but they’re also thinking beyond this year. Coaches will be all around the nation on high school campuses, looking for future Illini. A bye week is a key time to talk to recruits, especially since Illinois’ coaches will likely be the only ones speaking with the high-schoolers this week.

There are many different things coaches make sure they talk about with recruits, but there is one thing that is more important than others.

“Perception is everything, especially when you’re talking about the recruitment battle to get the best football players to be interested in the institution,” said John Holecek, head football coach at Loyola Academy in Wilmette, Illinois, and former Illinois linebacker. “You have to have tremendous leadership top to bottom in recruiting and that all takes hits when all you have are bad stories coming out.”

The University’s image has taken hits recently, especially in the past year. Recent issues with James Kilgore and Steven Salaita, the resignation of former Chancellor Phyllis Wise and the player mistreatment investigations in the athletic department have cast a dark shadow on the University.

Holecek said he believes the University’s reputation has taken a hit and needs a drastic change.

Illinois’ recruiting staff saw mixed results during former head coach Tim Beckman’s tenure at Illinois — the Illini nationally ranked 49th, 72nd and 47th, respectively, from 2013-2015 according to 247sports. Fifty-four of the 118 players on the team — or 46 percent — come from the state of Illinois. But Illinois has struggled to land the state’s top recruits.

Rochester High School head coach Derek Leonard said he felt the struggles started because of negligence to recruit in the state by former head coaches Ron Turner and Ron Zook. Turner predated Leonard’s time at Rochester, but Leonard felt that Zook neglected to recruit in a state that was filled with football talent.

Leonard thought Beckman started to repair the damage before he was fired in August.

“At times, other people have recruited better,” Leonard said. “I think they’re improving from the past and are trying harder (to recruit in the state).”

Freshmen lineman Gabe Megginson and running back Dre Brown were ranked No. 2 and No. 7, respectively, in the state’s class of 2015. Illinois signed six more top-20 players in the state from 2010-2014. Many of the state’s top-ranked recruits chose to attend other Big Ten schools like Michigan, Michigan State and Wisconsin, while others chose to go to other Midwest schools like Missouri and Notre Dame.

The Illini have a commitment from No. 7 Kentrail Moran, a running back from O’Fallon High School, and there are three top-20 players uncommitted according to 247sports.

High school football players used to dream of playing for the state’s flagship team, but the change in social media has affected that dream. Players can now see other programs more and find the perfect fit. Wins and losses and loyalty to the state aren’t the only things that matter for players.

“I don’t think it’s a top priority (to play for the flagship team),” O’Fallon head coach Brandon Joggerst said. “It’s just trying to find the right fit for you … I don’t know if that’s driving kids.”

The coaching change at Illinois a week before the season hasn’t hurt how recruits view Illinois. Almost 25 percent of Division I programs change coaches each offseason, and this season has already seen major firings.

Coaches expressed positive views of head coach Bill Cubit and the stability he’s provided to the program. Big wins like the one against Nebraska and competitiveness against teams like Iowa has garnered interest from recruits, including from recruits who’ve committed to a school already.

“We’re getting a lot of positive feedback,” Cubit said. “A lot of guys will be on the road selling the Illini to people and, they’re really looking forward to us getting there.”

While players rest and prepare to host the Badgers next Saturday, the next opponent in a season during which the Illini are trying to reach a second-straight bowl game and contend in the Big Ten West, the coaches are selling the program that they’ve built.

Memorial Stadium might sit empty come Saturday, but the future of Illinois football will be shaped on high school campuses all around the nation this weekend.

A previous version of this story misspelled Steven Salaita’s first name as “Stephen.” The Daily Illini regrets this error.