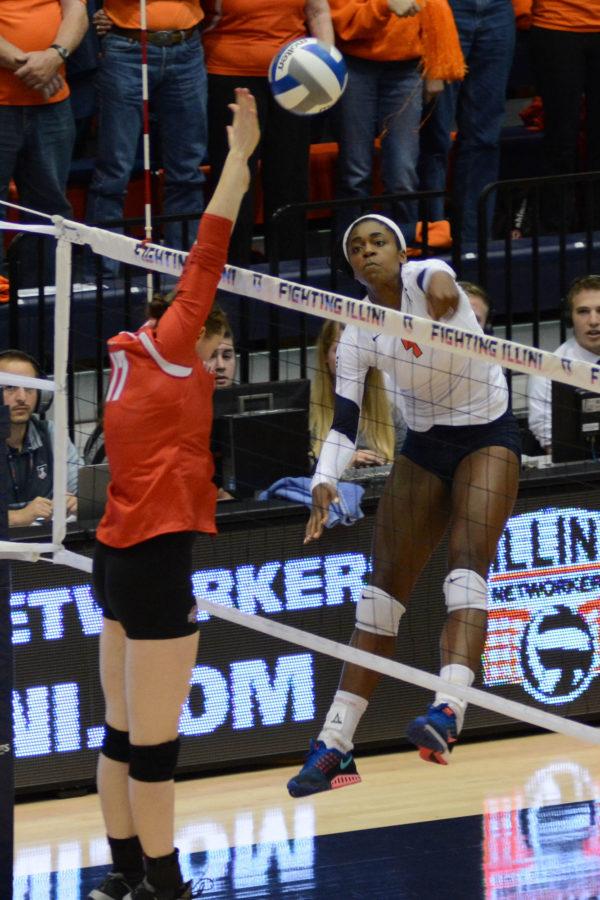 Illinois’ Naya Crittenden (9) spikes the ball during the match against Ohio State at Huff Hall on Saturday, Oct 10, 2015. Illinois lost 1-3.

The Illinois volleyball team’s schedule has been grueling thus far, and it doesn’t get much easier from here on out.

The No. 13 Illini (11-6) will have a chance to end its four-game losing streak Friday against lowly Iowa (10-9), winless in six matches against Big Ten teams. It will be the first non-ranked opponent Illinois will play in its last five matches, but the Illini will be back to playing ranked opponents the very next night when No. 3 Nebraska (14-2) comes to Huff Hall.

While the Illini work on maintaining a high level of energy throughout a match, the team has no plans of making light of its Hawkeye match, which head coach Kevin Hambly said has improved in recent years.

“Iowa is getting close and they’re battling, and I like the things (head coach Bond Shymansky) has done there,” Hambly said. “I really like the athletes that he has and he is doing things to make it more difficult. He is doing some things offensively that are different than anyone else — some gimmicky things that make it hard to prepare for.”

Hambly said it is typical for teams to try non-traditional strategies when they are trying to rebuild, and he expects Iowa to settle back into a more conventional style of play once the program is more established.

In his second year as head coach, Shymansky has tried to rejuvenate the Hawkeye program by bringing in five transfers in the last two years. Hambly has had only four transfers in his seven years as head coach.

Amongst those four transfers is junior opposite hitter Naya Crittenden, who played her first two years at Oregon before coming to Illinois. She has provided another source of power for the Illini defense, leading the team in blocks against Ohio State with five.

But, like most of the team, Crittenden is striving to show the type of energy throughout the match that the team expects. She said that the whole team has bought into the mentality Hambly wants to see from his players.

“You have to come out at the beginning of the game, ready to fight,” Crittenden said. “Even if the other team gets on a run of points, you just keep energy going and fight through those moments.”

Illinois will certainly need to bring the fight to Nebraska Saturday if it hopes to come out of the match with a win. The Cornhuskers have their signature win over the Nitanny Lions, who they replaced as No. 3 in the rankings.

Hambly said that Nebraska could be the best team in the conference. He praised its depth, and like Illinois, the Huskers have a freshman star of their own in outside hitter Mikaela Foecke, who is coming off an 18-kill game against Michigan.

According to Hambly, the team will need to see more production from its middles, Ali Bastianelli and Katie Stadick, in order to compete with Nebraska’s firing power. He said that the travel has been detrimental to the front-line’s technique but there has been steady improvement in recent weeks.

“Things are slipping and you couldn’t address them because of the travel,” Hambly said. “Now, we have some time. I thought we actually made some strides this weekend. We were better this weekend than the weekend before, but not where we need to be.”