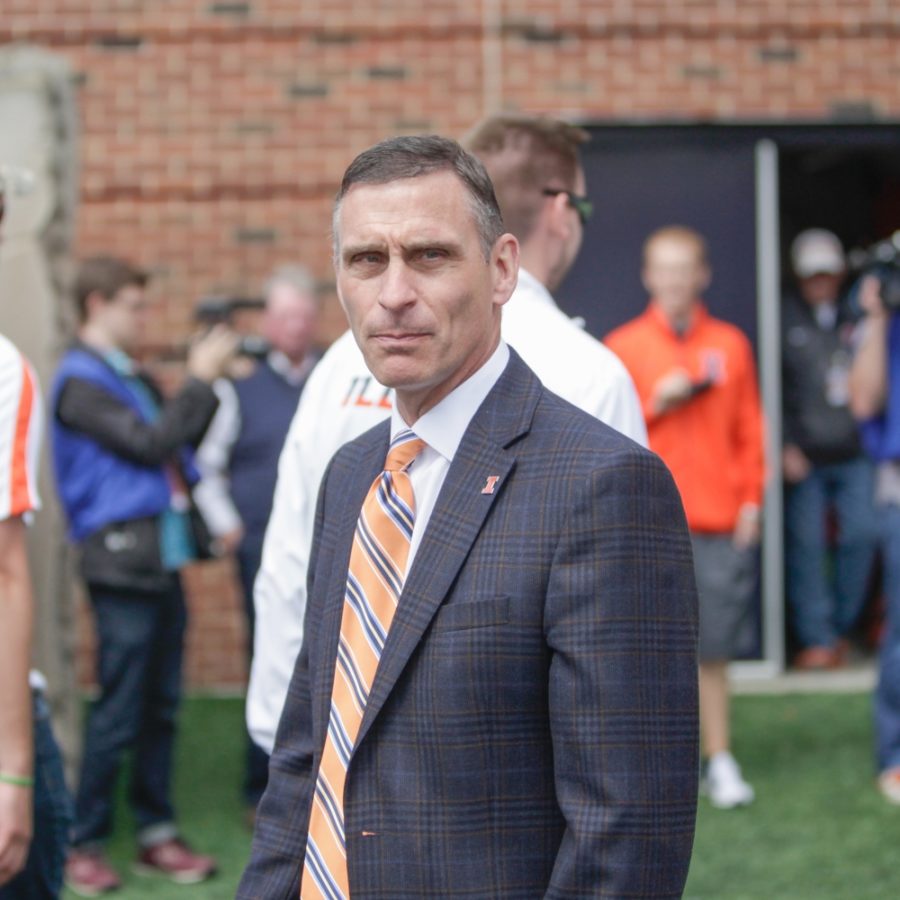 After several player accusations of mistreatment, lawsuits and swirling debate on the state of Illinois athletics, Athletic Director Mike Thomas’ years with the University are over.

Interim Chancellor Barbara Wilson announced Monday that the University would be exercising the “without cause” separation clause in Thomas’ contract in a Massmail to students, faculty and staff.

Wilson said there are no findings of misconduct on Thomas’ part, “In order to move forward and put the focus of the athletics program back on the success of student-athletes, a change in leadership is needed.”

Interim head coach Bill Cubit and new assistant coaches were found free of wrongdoing in the report. Former Illinois football player Simon Cvijanovic said that Cubit attempted to convince him to stop taking anti-anxiety medication to improve his football performance prior to the 2014 season.

Cubit said Cvijanovic had complained about stomach issues and other impediments to his performance during Camp Rantoul, which the Cvijanoivc believed stemmed from his medication. Cubit shared personal experiences about one of his family members who took similar medication as a way to advise Cvijanovic’s decision — the report said Cubit put the decision entirely in Cvijanovic’s hands.

The trouble for Thomas began in late May when Cvijanovic took to Twitter to voice his unhappiness with former head football coach Tim Beckman and the athletic department as a whole. Accusations followed from other former football players, which prompted Thomas and Chancellor Phyllis Wise to commission an independent investigation of the program.

Beckman released a statement through his lawyer Monday night refuting the report’s findings. In his statement, Beckman said he never meant to intentionally put players in harm’s way. In regards to scholarships, Beckman said that the University governed the withdrawal and release of scholarships.

The statement also reiterated that Beckman was confident in his coaching methods during his time at Illinois.

In the weeks following Cvijanovic’s accusations, families of former women’s basketball players reported to The Daily Illini that they had sent letters in to University administrators — including Thomas — regarding player abuse and mistreatment at the hands of coaches Matt Bollant and Mike Divilbiss.

Divilbiss left the program following the internal review prompted by the letters, but the University said his departure was mutually agreed upon at the time. Soon after the existence of the women’s basketball letters was made public, Thomas and Wise commissioned a second independent investigation, this time into the women’s basketball program.

The independent investigations into the women’s basketball programs found no racism on the part of Bollant. Wilson announced the final results of the Francek Radelet investigation into allegations of player abuse would be released later Monday.

“I understand the administration’s decision to turn the page and turn the focus of this organization back on the success and welfare of our student-athletes,” Thomas said in a statement Monday. “It has been my privilege to be part of this storied program and this great university. I will always cherish my time at this institution and in this community.”

An additional nail in Thomas’ coffin was the lawsuit filed on June 8 by former Illini soccer player Casey Conine. Conine alleged mistreatment of a concussion she suffered during the 2014 season that ended her college career.

The former women’s basketball players who alleged mistreatment at the hands of Bollant and Divilbiss filed a $10 million lawsuit on July 1. That lawsuit is ongoing.