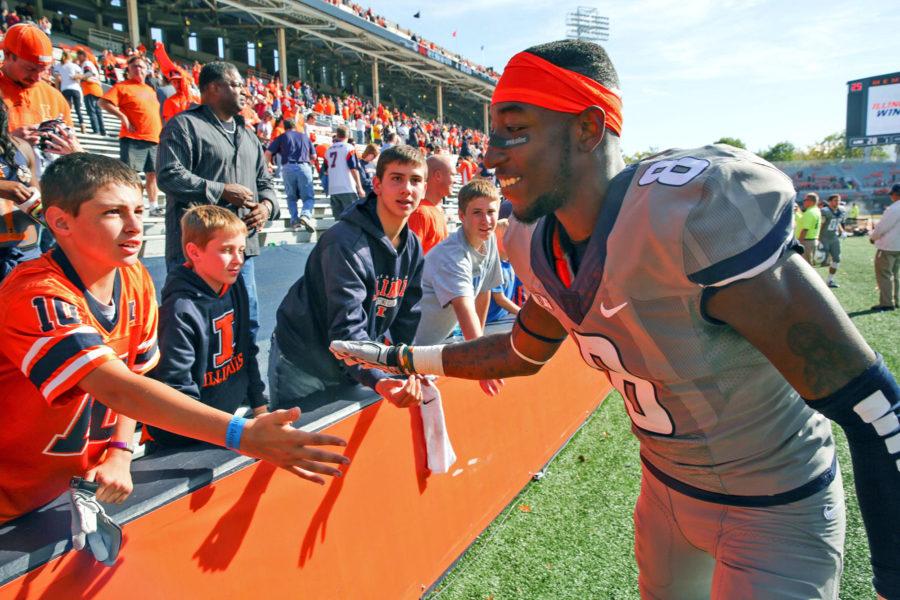 Illinois' Geronimo Allison (8) gives high-fives to young fans after the homecoming game against Minnesota at Memorial Stadium on Saturday, Oct. 25, 2014. The Illini won 28-24.

It’s Homecoming week at Illinois and the legacy of the “Gray Ghost” will be present during the Illini’s game against Wisconsin on Saturday.

Last year, players wore the uniforms to honor the 90th anniversary of Grange’s historic homecoming performance against Michigan. In that 1924 game, Grange scored four touchdowns and ran for 262 total yards in the first 12 minutes. He would then run for a fifth touchdown and throw for a sixth.

On Monday, head coach Bill Cubit joked with the media about Saturday’s gameday attire — he pretended not to know about the uniform announcement.

“We have gray uniforms?” Cubit asked with a laugh.

The players are excited to break them out and are hoping for another victory in gray.

“I love the gray uniforms,” T.J Neal said. “They’re a really good look. It’s a change of pace and a chance to do something different.”

It is likely that the Illini offense will once again be without senior running back Josh Ferguson, Cubit said Monday, calling the starter’s status “questionable.” Ferguson suffered a shoulder injury in Illinois 14-13 win over Nebraska.

Cubit said receiver Marchie Murdock may “not be game-day ready.”

Wide receiver Geronimo Allison will return to play after undergoing concussion tests and resting during the bye week. The Illini are hoping the bye week will help propel them to another win, they were 1-1 last season after off weeks.

Receivers Mike Dudek will be out Saturday. Dudek tore his ACL during spring practice

Cubit said Justin Hardee will run a little in practice this week. Hardee and Cubit have talked but ultimately the choice of sitting out for the rest of the season will be up to Hardee, because the senior is set to get his masters degree at the end of the school year.

“I still think Mikey is a couple weeks away,” Cubit said. “I don’t think (Dudek returning is) going to happen.”

Cubit on the Quad

Cubit has made a point to keep connecting with fans throughout the season.

Each Thursday before the game, Cubit has gone out around the quad and Green Street, meeting students and asking them to come out and support his team.

He said the response to this year’s team is much different from previous, and he’s had people come up to him in restaurants and even airports, yelling “I-L-L.”

“There’s excitement out there,” Cubit said. “I’m happy for the kids and I want the kids to go out there and have fun.”