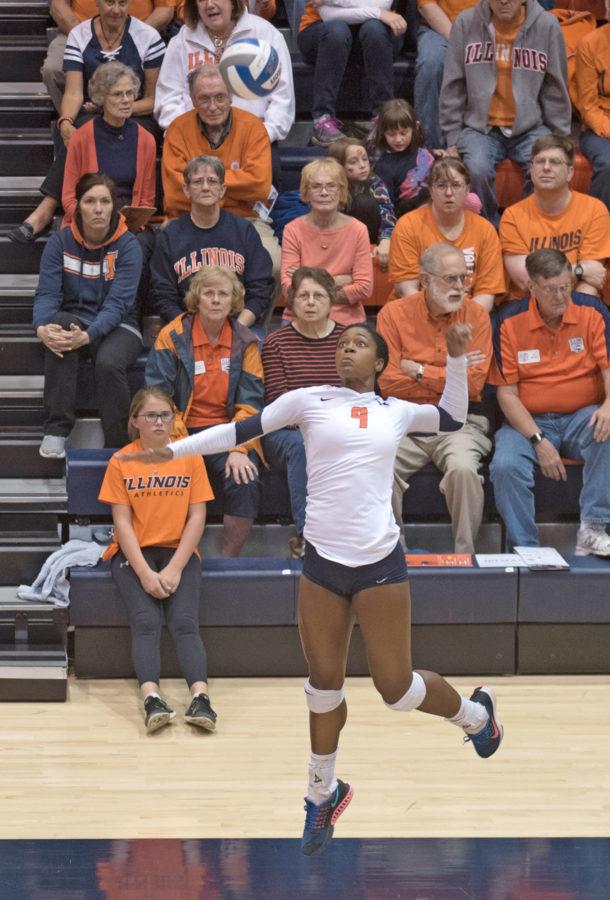 The Illinois volleyball team (12-7)MD snapped its four-game losing streak against Iowa on Friday. It was the team’s first win at Huff Hall since the Illini Classic in August.

The streak started against Wisconsin, which came at the tail end of the Illini’s month-long stint of road games. Following a loss to Minnesota, the team returned home to play top-10 teams Penn State and Ohio State in the same weekend.

Following this past weekend, Iowa (10-11) ssremains one of three teams in the Big Ten yet to record a conference win — the Hawkeyes sit at 0-8 in the conference.

Illinois took advantage of its opponent’s weaknesses and put together its first sweep since playing at Rutgers on Sept. 26. The team posted a .284 sshit percentage in the match against the Hawkeyes while limiting them to just .157.

“We worked really hard in practice this week, and I think we all put our heads in it together,” opposite hitter Naya Crittenden said. “There is still things we need to improve, but I think we did a good job (against Iowa). Especially at the end, it was kind of up and down, but we finished it.”

Illinois seems to have found a powerful force on the court in Crittenden. The first-year transfer student started both games for the Illini over the weekend, and came up big in both.

The junior tied for most kills on the team in both matches with 10 and nine against Iowa and Nebraska, respectively. She also scored efficiently, posting .571 and .368ss hit percentages in the respective matches. Defensively, she added two blocks in both contests.

Crittenden said she felt more comfortable this weekend than she did last week against Ohio State, when she only managed a .091 sshit percentage. She added that head coach Kevin Hambly’s film sessions during the week have helped her identify what she needed to improve on.

Hambly said Crittenden is one of the better blockers on the team, and he praised her work ethic in practice.

Freshman setter Jordyn Poulter has already made a name for herself as a stellar passer, but Hambly would like to see her add another dimension to her game: attacks.

According to Hambly, Poulter’s size and leaping ability make her a serious threat to score off dumps. The setter attempted only seven attacks and had three kills over the weekend.

Hambly added that Poulter is a distributor by nature, but defenses are leaving her open to make a play. He said he wouldn’t mind seeing Poulter attempt more than five attacks a match.

“We are telling her that, ‘You have to dump at times. We need you to be offensive because hitters are leaving you wide open and they are perfect passes. You are 6’2” and have a 34-inch vertical; go up and jam the ball down,’” Hambly said. “She could be one of our better weapons.”