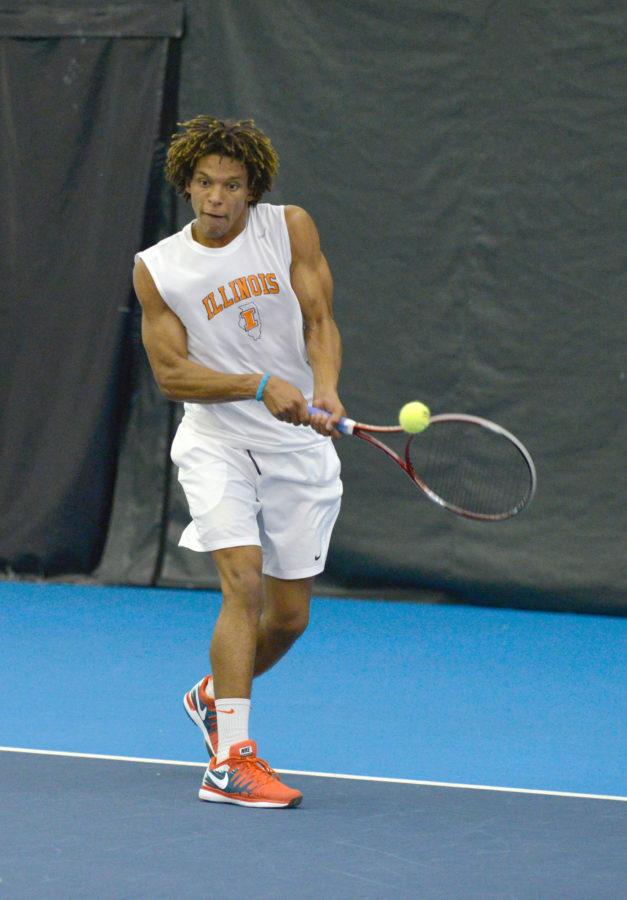 Illinois’ Julian Childers hits the ball during the match against No. 8 Texas at Atkins Tennis Center on Sunday, Feb. 9, 2014. The Illini won 4-3.

Some members of the Illinois men’s tennis team will begin the road to nationals this weekend at the Midwest Regionals at Notre Dame.

Leading the Illini into South Bend, Indiana, are redshirt junior Julian Childers and sophomore Aron Hiltzik, who are each coming off of strong performances.

He won the Crusader Invitational Group A Singles title hosted by the University of Valparaiso on Oct. 18. It was one of Childers’ better performances of the year. He was hardly tested throughout the tournament, not dropping a set through his four rounds and losing only 11 of his 59 total service games.

The junior faced players from Northwestern Ohio, Toledo and Youngstown State on his way to the title.

Although he overpowered most of the competition, Childers believes that this title will boost him even more going into regionals.

“It was nice to play under pressure and feel what it is like when you are supposed to win matches,” Childers said. “Everyone needs to be able to play when they are nervous and a little tight, but it was good to go out there and take care of business.”

Along with Childers, Hiltzik has also caught the eye of the tennis world lately, pulling off an upset over No. 2 seed Nicolas Alvarez of Duke at the Intercollegiate Tennis Association All-American Championship in Tulsa, Oklahoma on Oct. 9.

Hiltzik enters the Midwest Regional as one of the favorites in the field based on his top-50 ranking nationally, along with his play in last year’s regionals. Hiltzik entered last season’s Midwest Regional as the No. 13 seed, and played his way into the semi-final match. He fell in the semis to eventual champion Mikael Torpegaard of Ohio State.

Hiltzik expects a title going into this year’s event.

“I always expect big things from myself, and if I don’t win the tournament it wouldn’t be a successful one,” Hiltzik said. “I’m just going to have to take it one match at a time, and hopefully I’ll get the best of everyone.”

Joining Hiltzik and Childers in the Midwest Regional will be redshirt junior Alex Jesse and sophomore Toshiki Matsuy. However, Head Coach Brad Dancer said freshmen Asher Hirsch and Pengxuan Jiang will be on standby to compete.

“We’re not going to take anyone with us that we don’t think is capable of winning the tournament,” Dancer said.

Some of the Illini’s competition include host school Notre Dame and Big Ten foes Northwestern, Minnesota and Ohio State, all of which are projected to be among the top teams in this year’s regional.

Dancer said that he is looking forward to seeing his team grow individually and competing against the regional’s top competition.

“We always talk about identifying yourselves out on the court, and I want to see our guys take that to another level this weekend,” Dancer said. “I want to see who they are and what they stand for. That it is easily recognizable.” fm