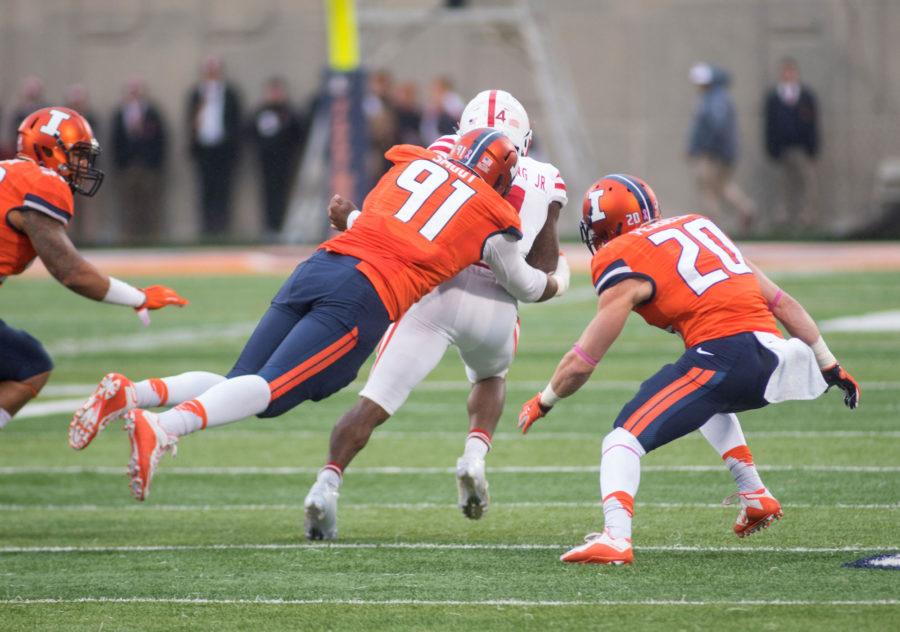 If a University student who didn’t know who Dawuane Smoot was saw the Illinois football defensive lineman today, they probably wouldn’t believe that he used to weigh 220 pounds and run track.

Much of his competition didn’t expect him to be a threat when they saw him at the start line. But when the race started, Smoot would always surprise them.

“I feel like everyone underestimated me because I was bigger than anyone else,” Smoot said. “They would look at me and be like, ‘look at this guy, he’s not going to do anything.’ But when I went out there I loved being there and being the underdog.”

While it was fun to shock other runners, his competitive track days ended when he came to Illinois. He had played defensive line in high school and he had no trouble getting to the quarterback, but in Division I football, he had to put on weight. Smoot weighed 220 pounds when he arrived on campus and compared himself to safety Caleb Day — a speedster who weighs just over 200 pounds — in physical appearance.

The defensive lineman was forced to play in his freshman season — head coach Bill Cubit said he wished the coaching staff would’ve redshirted both Smoot and defensive tackle Chunky Clements during their freshman year.

Smoot played in seven games, notching eight tackles and one sack, and played in all 13 games last year. He finished with 33 tackles, 7.5 tackles for losses, 2.5 sacks, three quarterback hurries and two pass break ups in his second season.

Although Smoot could’ve used the extra year to better prepare for his first season, he has no regrets of burning his redshirt to help his team.

“There’s nothing wrong with redshirting,” Smoot said. “It gives you the motivation at the moment to step up.”

His better performance this season came when the entire defensive line has made big improvements. He is fifth in the FBS and third in the Big Ten with 11.5 tackles for loss, and he leads the team with five sacks. Smoot also has 19 total sacks and two quarterback hits in the six games that he’s played.

The junior, like many of his teammates, credits the improvements in his game and the unit’s entire performance to the addition of co-defensive coordinator Mike Phair. Smoot is more focused on his first step and how he’s going to use it to reach the whoever has the ball

The coaching staff’s method to keep him and the rest of the defensive line fresh has also helped Smoot and the line attain success halfway through the season. The week’s practice schedule doesn’t involve much heavy contact, which helps keep the players’ bodies fresh for Saturdays. Smoot has found ways to keep himself in good shape for games, despite the line’s lack of depth and the inability to switch out more players during games.

“He’s playing pretty hard,” Cubit said. “By Saturday, he’s playing at a peak performance. He’s not banged up, nicked up. We’re not worried about taking him off the field during the game.”

Smoot is focused on the next games rather than focus on his early success. The junior knows there are plenty of Big Ten offensive linemen waiting to get in his way.

All he wants to do is surprise them and beat them to the finish line — just like he did on the track.