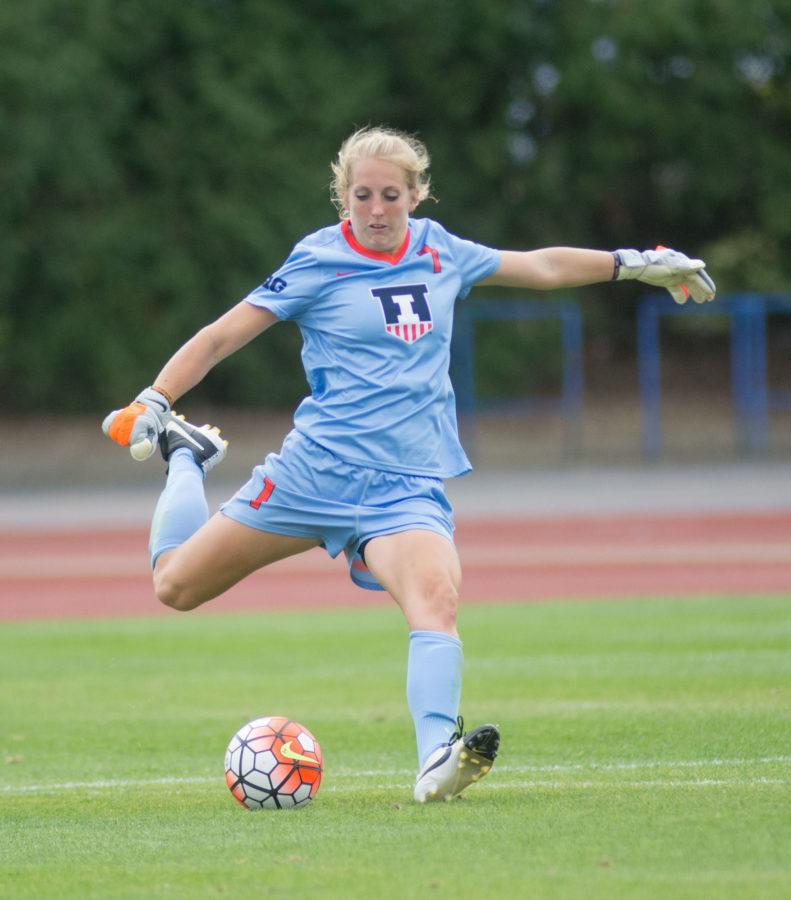 Claire Wheatley sends the ball forward during the game against Maryland at Illinois Soccer and Track Stadium on Thursday. Illinois won 2-1 in double overtime.

A loud cheer echoed throughout the Illinois Soccer Stadium following Wednesday’s practice. At the conclusion of practice, the Illinois soccer team found out Michigan State lost to Maryland, which sets Illinois up for a chance to lock in its spot in the Big Ten tournament, depending on a few different circumstances.

Illinois (9-4-3) hosts Northwestern (11-4-2) on Saturdaybr. This weekend’s game will have a great impact on determining the Illini’s postseason fate.

Of the 14 teams in the Big Ten, only the top eight compete in the Big Ten Tournament. Illinois occupies eighth place in the conference with 12 pointsbr. Right behind Illinois is Michigan State with 11, Purdue with 10 and Nebraska with eight pointsbr.

Illinois, Michigan State, Purdue and Nebraska are all in contention for the final tournament seed depending on how each team finishes out its seasons.

Each team has two games left on their schedules, so if the Illini can win this Saturday against Northwestern and next week against Minnesota, they will be guaranteed a spot in the conference tournament.

If the Illini’s final two games end in any other result, their postseason aspirations will depend on the outcomes of Michigan State, Purdue and Nebraska.

But Illinois head coach Janet Rayfieldbr isn’t thinking about that. She said the Illini are keeping the mentality they have had all season by focusing on one game at a time.

“In the fight now, we can at least control our own destiny,” Rayfield said. “We’ve got to take it one game at a time. Nothing about the next game matters, unless we can take care of this one. We’re going to focus on Northwestern this week.”

While Northwestern hasn’t been a powerhouse on the offense end, it has relied on its defense for most of its success this season. The Wildcats have averaged 0.53 goals allowed per game and have limited opponents’ shots per game to 9.5.

Illinois scored three goals in its win over Nebraska last week, but it was the team’s first multi-goal match for the Illini since Sept. 27 in the 2-1 win over Maryland.

The Illini’s lack of scoring may be a result of forward Jannelle Flaws’ battle this season with Plantar Fasciitis. The senior is the Illinois career goal-scoring leader, but has not been producing similar to years past. In 2013 Flaws scored 23 goals and in 2014 she scored 17 goals. Flaws has nine goals this season with two games left in the regular season.

With Flaws’ inconsistent scoring efforts, Illinois has gotten production from other players. Most recently, Illinois has received scoring from forward Kara Marbury. Marbury scored twice in the win over Nebraska and is second on the team in goals scored with five on the yearbr.

Despite her recent individual success in the scoring department, Marbury said scoring goals is going to be a collective team effort this weekend.

“If I get the ball and have the opportunity, I’m going to take it,” Marbury said. “(Scoring) is a duty that everyone has to do.”