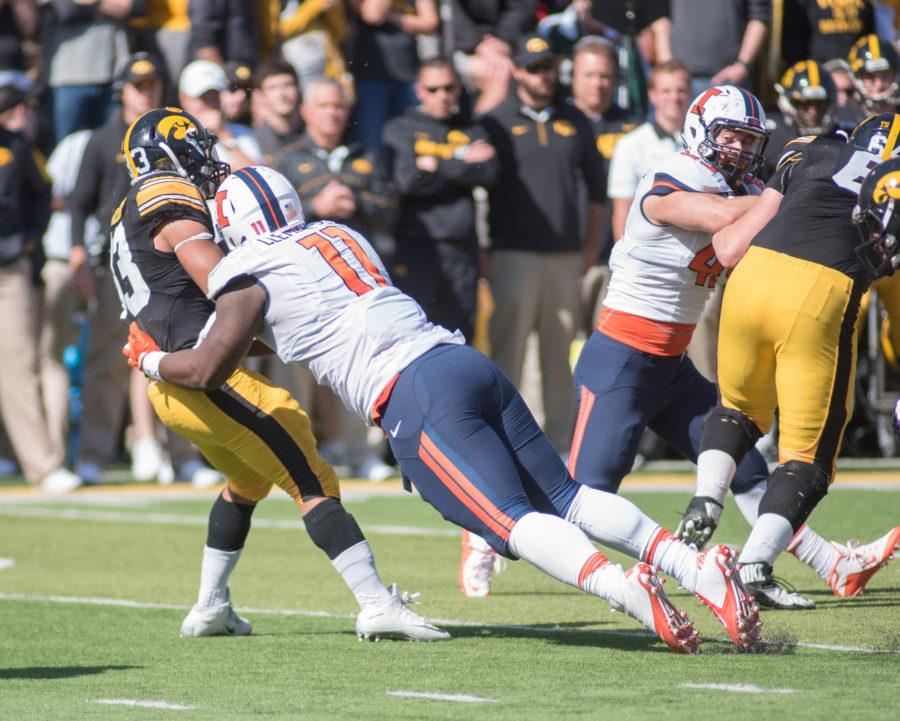 Defensive lineman Chunky Clements tackles the Iowa running back behind the line of scrimmage during the game against Iowa at Kinnick Stadium in Iowa City on Saturday, October 10. Illinois lost 20-29.

Illinois football coach Bill Cubit has coached in many different Homecoming games during his 40-year coaching career. He’s celebrated victories and losses throughout the years with his players but has never had the opportunity to go back to his Homecoming.

Despite his absence at his alma mater, he enjoys Homecoming and the return of alumni — especially at Illinois. Former Illini players have called and texted him that they’re coming back for Saturday’s game against Wisconsin.

All of the pageantry of the week makes it more bearable that he can’t return back to his school.

“I think it’s a pride thing with the alums coming back,” Cubit said. “I’ve never been able to do it and I hope one day I’m able to do it.”

Saturday’s Homecoming game should have Illinois alumni and fans excited with the team’s early success. The Illini were 3-4 heading into last season’s matchup against Minnesota and lost their first three Big Ten gamesbr. This year’s game features a 4-2 Illinois team that beat Nebraska in the last minute and remained competitive against 7-0 Iowabr.

Illinois has attained this success despite former head coach Tim Beckman being fired a week before the season, the loss of freshman All-American wide receiver Mike Dudekbr and many other offensive and defensive injuries. The defense ranks in the middle of the Big Ten in most defensive categories and quarterback Wes Lunt and the offense have managed to attain success despite a lack in wide receivers and the loss of starting running back Josh Ferguson, whose status remains doubtful as of Wednesdaybr.

Lunt and the offense will face a much-improved Wisconsin defense that ranks second in the conference. The Badgers allow an average of 169 passing yards per game and have allowed three passing touchdownsbr. The team’s rushing defense allows an average of 103.3 rushing yardsbr.

Wisconsin’s offense is also different from teams past. The Badgers have a tradition of elite running backs but with injury to Corey Clement, they have relied on the pass more. Joel Stave has thrown for 1,708 yards in seven games and has tossed eight touchdowns and five interceptionsbr.

“They’re starting to get out of their scheme, kind of like Iowa,” Dawuane Smootbr said. “They want to punish you with the run, and if they can, they’ll start with the pass.”

A win over Wisconsin would be important in the Big Ten West. Many Illini players said they’re tired of playing for moral victories after their loss to Iowa. They want to be competitive against good teams and be at the top of the standings.

Wisconsin is a favorite in Saturday’s game but that kind of stuff doesn’t matter to players like Lunt. They weren’t favored to defeat Penn State last year or against Nebraska this year.

“I think (it’s another opportunity to make a statement),” quarterback Wes Lunt said. “I don’t think we’re favored to win this game by any means. If we play like ourselves one play at a time, I think we’ll be ok.”