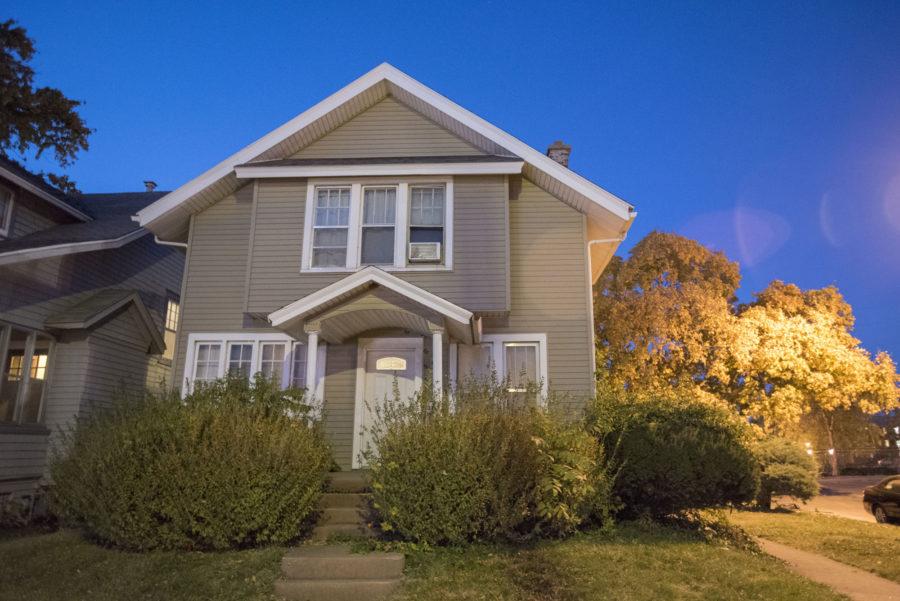 In a sea of autographs above a fireplace mantle in a house on Green Street in Champaign, Corey Lewis’ name isn’t the highest on the wall, but it is the oldest.

This Homecoming, the former Illinois right tackle, who played his final season in 2013, won’t be back to celebrate. Instead, the job will fall to dozens of others who have scrawled their signatures on the wall.

This autographing tradition carries on in the small living room that has hosted some of campus’ biggest men.

Next to the Yellow House on First Street, there’s a red brick building with a porch hidden by trees.

It’s still called “Fort Monk” by veteran and former players, but is informally known as the old football house. Lewis said that Fort Monk likely started in the ‘90s. But it was always a place that welcomed football players and friends alike.

Besides the memories, the only remnant of its football past is the autograph wall in the kitchen filled with names of Illini lore.

From inside jokes to the etching of “Fort Founders” on the top, it’s a mix of white and grey bricks on blue grout. Former players have signed their names and numbers as a way of leaving their mark.

Illinois legend Dick Butkus has signed his name on a brick, accompanied by an Illinois sticker next to the words, “the greatest linebacker ever.” Butkus has returned around a half dozen times over the years to hang out with players at Fort Monk, which last housed football players in 2010.

Now, it’s known as The Bungalow and belongs to a group of Pi Kappa Phi fraternity members. Senior Connor O’Donnell’s cousin lived in the house a few doors down, so when it came to finding his place, the old football house was a logical choice.

But the autographing tradition lives on. O’Donnell said that the girls who lived there before them were adamant about not painting over the autographed bricks, even the ones that say “ISU rocks” or “Mizzou.” For O’Donnell and his friends, the wall is a focal point and proof that the football house is home to memories for more than just athletes.

“Every time we show people Dick Butkus’ name, their eyes light up,” O’Donnell said. “He is probably the second-biggest name in Illini football, so it’s cool to have his name on our wall, and our names will be next to his.

“Hopefully the house is still standing when I come back for Homecoming.”

In 2009, Lewis unknowingly set the football house history on a new course when he, Supo Sanni, Corey Liuget and Michael Buchanan decided to get their own house on Green.

When they got the house, they didn’t realize what it would eventually become, and Lewis said that’s been the most interesting part of the building’s journey.

“It turned from just the house into ‘the football house,’” he said “And the wall found itself being autographed once again. That was just something we kind of did. Next thing you know, everyone started signing the wall.”

When it came to finding roommates in 2013 — after the departures of Buchanan, Liuget and Sanni — there was no question on who Lewis would choose­.

He picked offensive lineman Ted Karras, now an Illini senior. Lewis said Karras was a perfect fit for carrying on the tradition of the football house.

Between the five new roommates: Lewis, Karras, Simon Cvijanovic, Henry Dickinson and Pete Lovecchio, the house, now deemed “36 and a half,” continued to grow into its status as the football house.

Lovecchio, who left the team during the summer before his freshman year, remained close friends with the football players and lived with Karras sophomore year onward.

Karras and Lovecchio’s favorite memories are of just hanging out, watching TV and playing video games. Lovecchio’s most cherished memory is the night when all five roommates stayed up watching The Sopranos until 3 a.m.

“At the time, it wasn’t anything special, you’re just hanging out with your guys,” Lovecchio said with a laugh. “But looking back you’re talking about a really funny picture to look at — five guys all over 250 pounds crowded into a living room.”

At 6-foot-2 and 250 pounds, Lovecchio said his living situation was unique because, though he is always one of the biggest guys when he leaves his house, he has always been the smallest roommate.

As more houses are torn down around campus, the guys have found their house even more important. But they’ve struggled at times to get roommates.

“There’s not many houses on campus,” Karras said. “They’re becoming extinct. Some guys are just turned off from living there because it’s kind of a burden to live there.”

Karras, junior Zach Heath and Lovecchio are the house’s lone residents this year. Heath bonded with Karras on his official visit and said he couldn’t think of anyone else he would have wanted to live with.

“It’s really cool to see the atmosphere he’s created in his time here,” Heath said. “I just think what him and the past generations have started and carried on is transferring to why we’re becoming a better brotherhood now.”

Though Lovecchio does not suit up for the team, that brotherhood is still important to him. He’s proud of what the house means to former players but recognizes that he doesn’t always acknowledge what his house means in the grand scheme of things.

“When someplace is your home for so long, you don’t look at it as a legacy,” Lovecchio said.

But there are times he finds himself watching TV and staring at the wall of signatures.

“It’s very cool to know that you’re in the house that you come back to first,” Lovecchio said. “They still hold that in their minds that this is the place. I know that’s what Teddy wants to do and that’s what we are doing. It’s really nice knowing that we’re keeping something alive that was always a part of the Illini tradition. It’s deeper than football.”