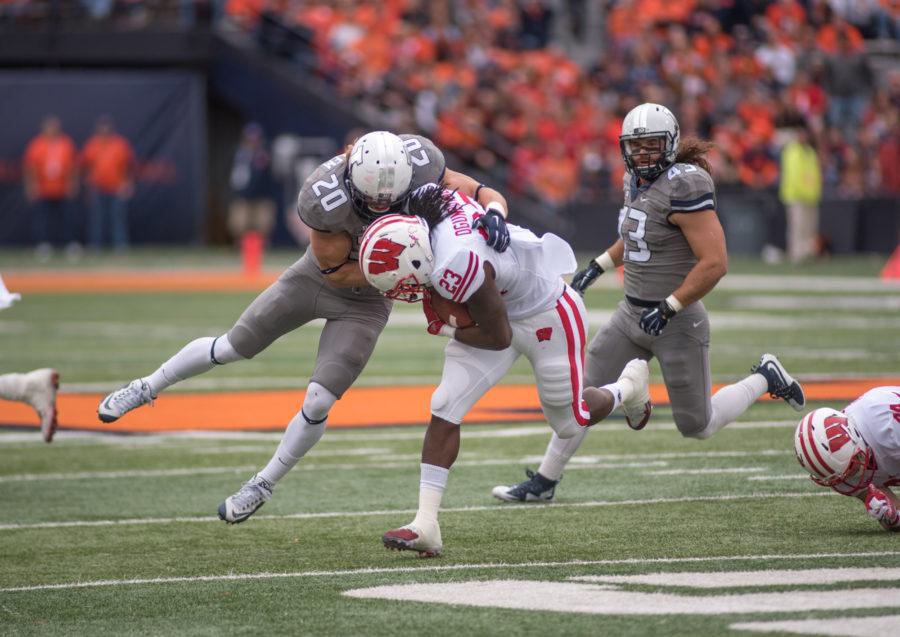 A fast defensive start and a late interception wasn’t enough for Illinois. In front of 45,438 fans and a full student section for the first time this season, Illinois football lost 24-13 in its Homecoming game against Wisconsin.

The Badgers have now won 10 of their last 11 games against the Illini. It’s Illinois’ first loss at home since last season’s 30-14 Iowa.

The defense started strong, forcing two three-and-outs, but failed to keep up that intensity throughout the game. The Badgers finished with 419 total yards, with only 138 rushing yards. They were without star running back Corey Clement.

Wisconsin quarterback Joel Stave left the game in the second quarter after getting sacked on two consecutive plays by defensive end Carroll Phillips. He went 3-for-7 with 49 yards, before being replaced by Bart Houston. Houston went 22-for-33 with 232 yards and two touchdowns.

“Once he got out there, we just had to adjust to his style of play,” Phillips said on Houston. “He made those three-step drops and just letting the ball go whether his receiver was open or not. I wanted them to hold the ball so I could get in there again.”

Eaton Spence added to the defensive highlights – he intercepted a pass in the end zone with 33 seconds to go in the first half, preventing a Wisconsin score. He dropped two additional potential interceptions.

But Illinois struggled once again to prevent big plays. Mason Monheim saved a touchdown with a diving run in the first quarter after a Wisconsin 35-yard pass.

Then in the third quarter, Taylor Barton forced Wisconsin wide receiver Alex Erickson out of bounds to avoid a touchdown after Erickson rumbled for 56 yards. Erickson — who is listed as a wide receiver — led the Badgers on the ground with 81 yards on four carries.

The Illinois offense struggled to find a rhythm, and relied on big plays to score. The sole touchdown came on a Ke’Shawn Vaughn 36-yard rush. The freshman finished with 55 yards on 13 carries.

Instead, the Illini relied on their kicking game. Though there were 30 mph wind gusts, Illinois’ Taylor Zalewski made two field goals on the day. Zalewski went 2-for-2 in his last appearance against Iowa.

The Illini passing game struggled, and tight end Tyler White went out with an injury that head coach Bill Cubit said did not look promising.

Quarterback Wes Lunt went 22-for-43 with 278 yards and no touchdowns. Geronimo Allison once again led the wide receiving corps with 99 yards on eight grabs. Malik Turner was the Illini’s second top receiver with 80 yards on four catches.

Illinois will travel to State College, Pennsylvania, to take on Penn State next weekend.